A Memorial for a Melted Glacier? 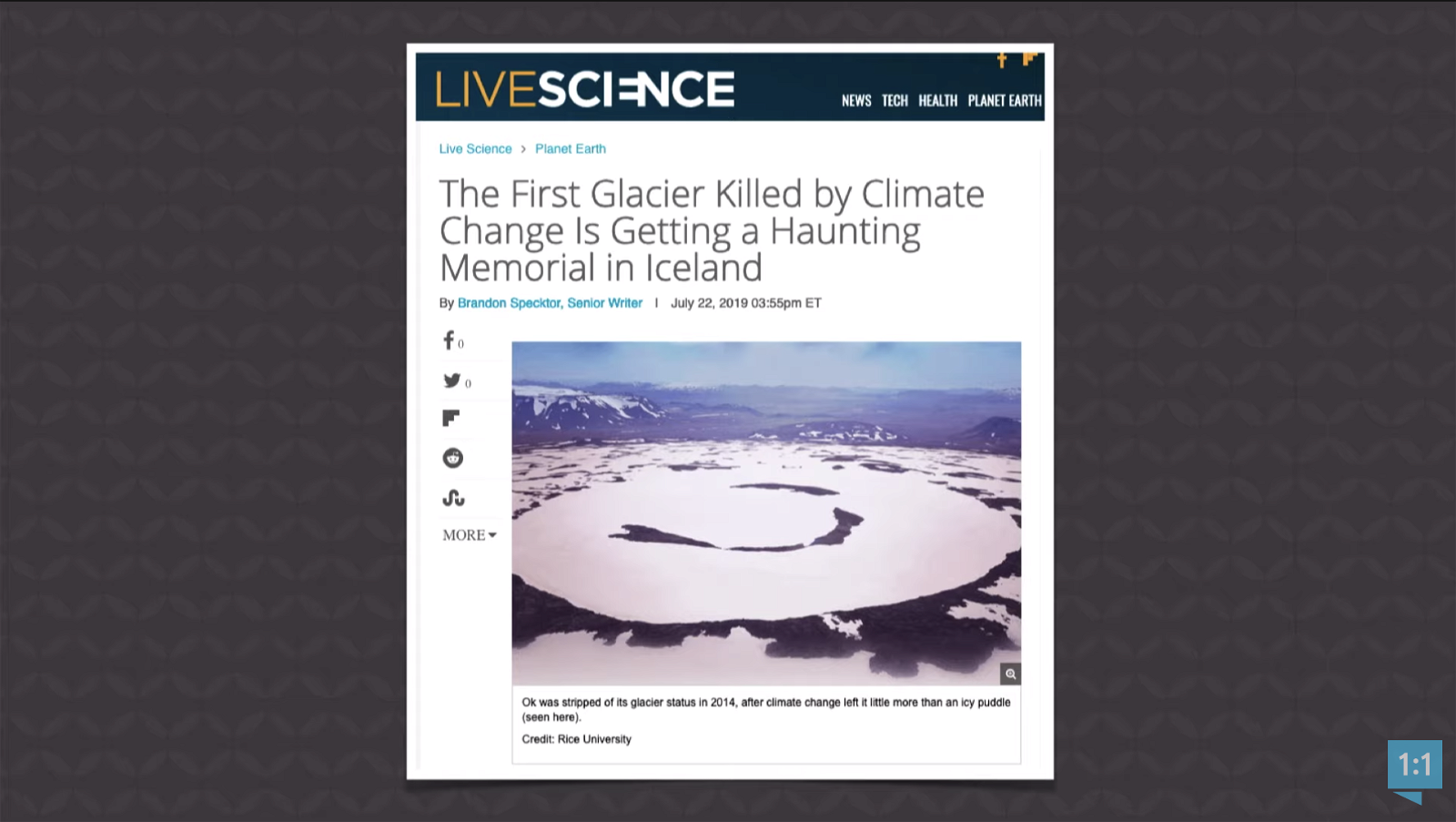 “This monument is to acknowledge that we know what is happening and what needs to be done. Only you know if we did it.” Those are some of the words featured in “A Letter to the Future,” a memorial to a melted glacier in Iceland. Okjökull, known as Ok, lost its status as a glacier in 2014 due to its shrinking size. The presumed cause of the shrinkage? Man-made climate change.

Throughout the article that reports on this melted glacier, these phrases are used, “the first glacier killed by climate change,” “the first casualty of climate change in Iceland,” “to memorialize the loss of Ok,” and “by marking Ok’s passing”—it’s almost like they are treating this glacier as if it were a living being that has died! (Actually, it’s the religion of pantheism.)

Well, if you have a wrong perspective on earth’s history, you will likely have a wrong view on climate change. Evolutionary scientists believe these glaciers are tens of thousands of years old and took very long ages to accumulate. They think they hold the clues to past climates and therefore we can know what the climate was like many thousands of years ago. But that’s the wrong perspective on these glaciers!

The global flood of Noah’s day caused massive climate change. Volcanism during the flood heated up the oceans, while volcanic particles in the atmosphere blocked out sunlight, cooling the continents. Warm oceans caused large amounts of evaporation, which fell as snow due to cooler air and land temperatures. This snow built up quickly, especially at the poles, resulting in an ice age. The glaciers we have today are just remnants of the post-flood ice age, over 4,000 years ago.

Glaciers are beautiful, and unfortunately this one was lost. But climates change—they have in the past and they will in the future. There’s no reason to panic. Climate change alarmism is based on a faulty view of the past and ignorance of God’s promise that we will always have summer and winter, seedtime and harvest (Genesis 8:22). While we are to care for the earth, we are to do so responsibly, with a correct view of earth’s past, not buying into whatever alarmism is in vogue in our day. (Keep in mind, all kinds of climate crises have been predicted, and they have yet to come to fruition.)

But this ridiculous article mourning the melting of a glacier almost in human terms reminded me of another item I saw in the news two years ago—Iceland proclaiming that there hadn’t been a baby born with Down Syndrome in five years. Why? Because 100% of babies—that’s right, every single baby—that received a prenatal diagnosis of Down Syndrome in the womb was killed before he or she was born. Every single one. Perhaps they should consider erecting a memorial to all the precious human babies, made in the image of God (Genesis 1:27), who were murdered for the sake of convenience, and simply because they would be born with a disability in that nation. But they wouldn’t build such a memorial because they worship the creature rather than the Creator (Romans 1).

What an upside-down world we live in: a depleted glacier gets a memorial and a warning to the future, but a “Down Syndrome-free world”—by murdering every such child—is celebrated. What we need is the gospel and a biblical worldview to challenge our thinking, because in a biblical worldview, image bearers have much more value than anything else in creation, and taking the life of someone made in God’s image is murder.

This item was discussed today on Answers News with cohosts Bodie Hodge and Avery Foley, along with frequent guest Roger Patterson. Answers News is our weekly news program filmed live before a studio audience here at the Creation Museum and broadcast on my Facebook page and the Answers in Genesis Facebook page. We also covered the following topics: