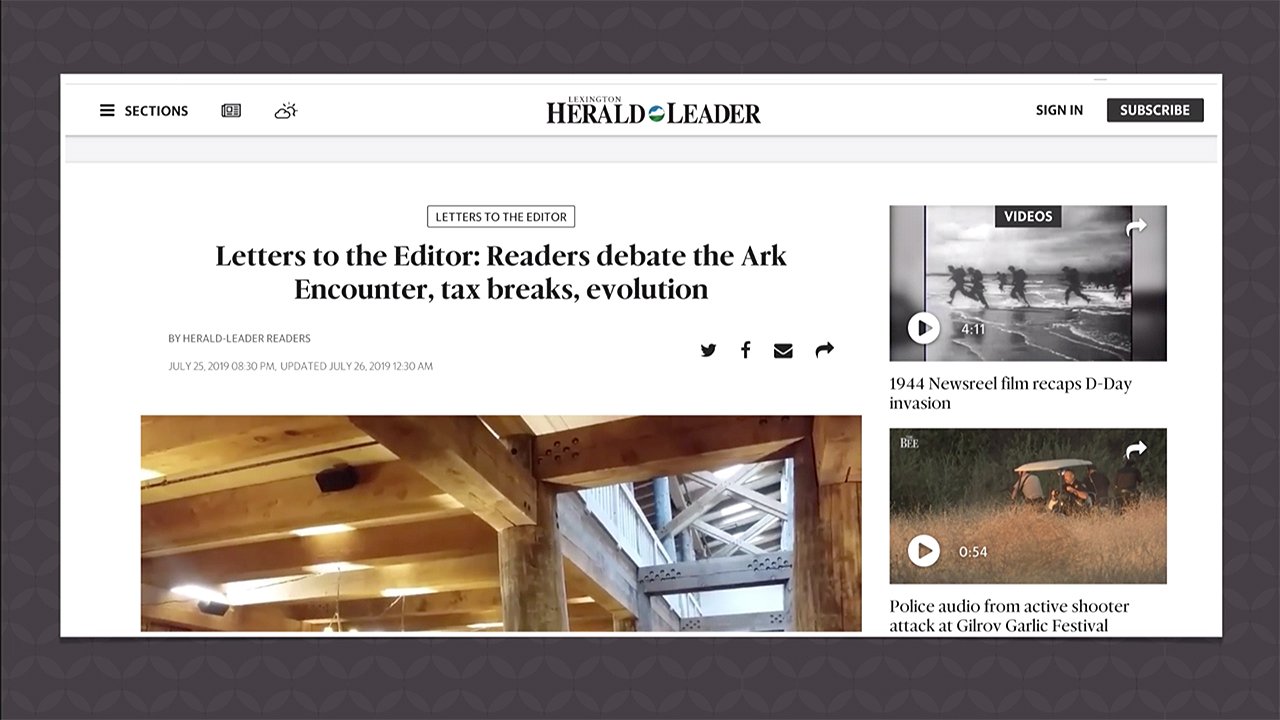 As I wrote on my Facebook page last week, a major Kentucky newspaper, the Lexington Herald-Leader (Kentucky.com), stooped quite low and published an opinion column worthy of a tabloid. The writer, a Herald-Leader reporter who has been anti-Ark Encounter over the years, penned an opinion piece about the Ark that was filled with misinformation, name-calling, and anti-Christian sentiment, continuing her ongoing opposition to our Ark Encounter Christian themed attraction in Williamstown, Kentucky.

Incredibly, this single incident was her “proof” that the Ark was not having an impact in the region after three years of operation!

The reporter has repeatedly refused to acknowledge that the Ark Encounter has been successful, not only with its excellent attendance (although she has finally come around to recognizing it) but with how our visitors have greatly impacted Northern Kentucky tourism—contributing millions and millions of dollars to the region’s economy. But the reporter thinks the economic impact has been small, and as her latest “evidence,” she cited the owner of a small business in the area—interviewed in an anti-Ark film—whose store in Williamstown, unfortunately, closed almost three years ago (just after the Ark opened). Incredibly, this single incident was her “proof” that the Ark was not having an impact in the region after three years of operation!

It’s interesting that many secularists and others like this reporter continue to attack the Ark for not greatly impacting Williamstown. Now, even though the address of the Ark Encounter is Williamstown, the actual city of Williamstown is a half a mile off the interstate. Because it’s not very visible, Williamstown sees very few Ark visitors, plus there are no major hotels or restaurant chains there. But the next city two exits north of the Ark exit, Dry Ridge, has been greatly impacted by Ark visitors because there are hotels (with new ones being built), restaurants, and shops, and they are easily visible from the interstate.

From Dry Ridge north to Cincinnati, hotels, restaurants, and other businesses are thrilled with the massive economic impact the Ark has had on them. One of the officials at the regional tourism bureau noted that in one Northern Kentucky city alone “we have four new hotels in Florence (a Tru by Hilton opened this month, with another 97 rooms available for Ark visitors) and another three in planning. You are keeping economic development in Florence busy.” Seven new hotels in one city!

Even in their opinion pieces, reporters should accurately report news and not cherry-pick their “evidence.”

So, this reporter is either lying about the impact of the Ark or is totally ignorant of the facts, which are actually quite well known and could be verified if she had simply talked to the local Chamber of Commerce or visitors’ bureau, as you would expect any good reporter or columnist to do. Even in their opinion pieces, reporters should accurately report news and not cherry-pick their “evidence.”

To correct the columnist’s misreporting, we submitted a letter to the editor of her newspaper, which was printed on Sunday. We also sent a similar one to its sister paper, The Paducah Sun of western Kentucky, which also ran the opinion piece. I am sharing our letter to the Sun, which was printed last week—it’s essentially the same letter we submitted to the Herald-Leader, but a little longer.

Putting aside the personal attack on our CEO Ken Ham (calling him a P.T. Barnum*) and a put-down of one of our several PhD scientists (Dr. Georgia Purdom) by columnist Ms. Blackford, we need to point out the legality of the Ark Encounter receiving a tax incentive offered all qualifying tourist attractions in Kentucky. Blackford’s opinion is that the incentive we earned was an unconstitutional church/state violation.

On the contrary, in 2016 we won a lawsuit in federal court against the previous governor for his unlawful attempt to block the Ark from participating in the incentive. The state’s actions were deemed unconstitutional by the judge. We were allowed to recover some of the project’s costs through a rebate of sales tax paid by Ark guests. It’s a reward for building in the state and not elsewhere, and contributing to the state’s treasury (and lowering the tax burden for Kentuckians). The rebate did not help build the Ark; it began after the Ark opened.

Contrary to the columnist’s contention that the Ark has “yet to bear fruit” for the local economy, Grant County businesses have been booming because of the Ark. All she had to do was pick up the phone and call the county’s Chamber of Commerce rather than cite a disgruntled source from over two years ago. This was false reporting.

With the words “resident scientist Georgia Purdom,” the columnist suggested that Dr. Purdom is the only scientist on our staff. But we have many full-time scientists, with PhDs in science from Ivy League schools (Dr. Jeanson from Harvard and Dr. Menton from Brown) and other respected universities, with doctorates in paleontology, astronomy, geology, medicine, and the history of science.

Your standard of seeking journalistic excellence was not met when you re-printed this inaccurate, caustic column. —Mark Looy, CCO, Ark Encounter

Also, a supporter of the Ark Encounter and who lives near the Ark sent a letter to the editor of the Herald-Leader to correct the reporter. Here is her letter, which has not appeared in the paper:

As a lifelong resident of Williamstown in Grant County, I have been amazed at the overwhelming response to our ARK Encounter. The writer of a July 16 Herald-Leader column made a harsh attack against our ARK and its founder. She also suggested the county has been minimally impacted.

Last year I wrote a guest column for the Grant County News about the tremendous economic success the ARK Encounter has been in our county. All of the businesses reported a dramatic increase in their business since the ARK opened.

Blackford continues to suggest that the state helped pay for the ARK to be built. Not one taxpayer dime opened the ARK. Tens of thousands of people, including our family, either purchased life-time memberships or made donations to help build it.

Blackford expressed concern that Kentucky’s limited tax dollars are being spent on the ARK. But the tax revenue generated at the ARK, local hotels, and restaurants far outweighs the sales tax rebate the ARK has earned once it was completed. If the ARK wasn’t here, the state treasury would be showing a shortfall instead of seeing an influx of tax dollars, which relieves our tax burden. —Judy W.

Follow what’s really happening at the Ark Encounter and plan your trip to Northern Kentucky to tour this remarkable ship at ArkEncounter.com.

*P. T. Barnum was an American showman and businessman of the 1800s famous for saying, “There’s a sucker born every minute.”