T. rex—Fashioned To Be Fearless

Contrary to popular portrayals of T. rex as an ungainly brute who lumbered onto the scene millions of years ago, he was regally designed. But like lions and other beasts of prey, his deadly behavior became a reminder of the terrible effects of Adam’s fall. T. rex was fearless.

Tyrannasaurus rex. Just hearing the Latin name evokes power and majesty. First described in 1905, this “tyrant lizard king” still holds the crown as the largest and most fearsome terrestrial predator ever discovered in North America.1

When first created, all the land animals, including dinosaurs, ate only plants (see “Was Filet Mignon on Eden’s Menu?” pp. 32–34). Other animals had no reason to fear T. rex, and he certainly had no reason to fear them! But Adam’s Fall shattered that peace. The Bible does not spell out the specifics of T. rex’s transformation, but this once-peaceful king become a terror to all who dared to venture into his domain.2

Since T. rex is found only in Flood deposits, our knowledge of this great animal is limited to his fossilized remains from Noah’s time, nearly 1,700 years after Adam’s Fall. We’re all fascinated to learn more, and that’s where the fun of forensic science comes into play. Like crime investigators, paleontologists try to reconstruct organisms and their environments by the partial evidence left at the “crime scene.” Though lots of “ifs” remain, we can learn many amazing things from fossils.

One thing is clear: T. rex was big, and he was well designed for his dominant role after the Fall. But being big didn’t mean that God just scaled up the design of other average-size, meat-eating dinosaurs, called theropods. To understand how T. rex was specially designed, we need to compare him to the “normal” proportions of other theropods.

Like all other theropods, T. rex walked and balanced on two legs. They didn’t walk upright like humans, however, who stand straight up with their spinal column erect. Instead, the theropod spinal column was horizontal to the ground. So their long body pivoted on the hips, like the board of a teeter-totter on its central support.

To properly balance their body, the front end had to be offset by the tail. To do this, most theropods had a relatively small skull and long arms at the front end, balanced by a long tail. Now look at the T. rex. His design displays some fascinating variations on the theropod theme.

First, the skull. Not only is the skull of a T. rex extremely long (over 4.5 feet, or 1.5 m), it is bulky as well. To lighten the load of his big head, T. rex had a number of large openings in the bone (called fenestrae) along the sides and top of the skull.

Muscles were attached along the edges of the fenestrae to give extra strength to the skull. These muscles also helped to give strength to the jaws and increase their bite force.

Two eyes on you. The skull was also relatively boxy. Other theropods had narrower, triangular skulls, with a somewhat limited forward view. The eyes of T. rex were set into a broad flare toward the back of the skull. So when T. rex looked down that long snout, he could do so with his eyes facing fully forward. This suggests that T. rex had excellent stereoscopic (3-D) vision like you and me.

My, what teeth you have! Of course, if you found yourself staring down the snout of a T. rex, your gaze would most likely be fixed on his teeth—his many teeth—his many big teeth. And here we can see another special design of T. rex.

Most theropod teeth are thin blades, often possessing serrations, like the edge of a steak knife. While T. rex teeth have small serrations, the teeth are anything but blade-like. In fact, most T. rex teeth are shaped more like railroad spikes than knives! The result is a powerful, puncture-style bite.

When turned against prey, the teeth could be driven in with massive force. The size of the mouth meant that a direct bite would take out a huge chunk of flesh. It is unlikely that any animal could withstand the shock and loss of blood that followed. Even if the T. rex didn’t come in for a second attack, the animal was most likely a goner.

Tiny arms. Perhaps the most obvious oddity that makes T. rex appear inelegant is his strangely diminutive arms. The arms aren’t tiny in an absolute sense (after all, they are the length of an adult human arm), but in comparison to the body they are, well, puny.

It is here that we must remember how a theropod balances. Head, torso, and arms must be balanced by tail. To balance such a massive head (weighing a few hundred pounds!), the tail had to be longer or the arms shorter. The option that God chose for T. rex is clear: smaller arms and a long tail.

The small size of the arms provides clues about the method T. rex used to attack and eat his prey. He depended less on his arms than his mouth. After all, it has been estimated that one direct bite could easily remove 100 pounds (45 kg) of flesh, so grappling with the prey was probably unnecessary.

But that doesn’t mean that the arms were weak or useless. Amazingly, the arms appear to have been heavily muscled. Hypotheses about their use range from helping T. rex rise up from a sleeping position to mating (particularly for males).

Not Your Ordinary Theropod

The largest theropod ever discovered in North America, T. rex was not just a scaled-up version of smaller, meat-eating theropods. T. rex showcased several unique designs that enabled him to be kind-sized and exceptional. 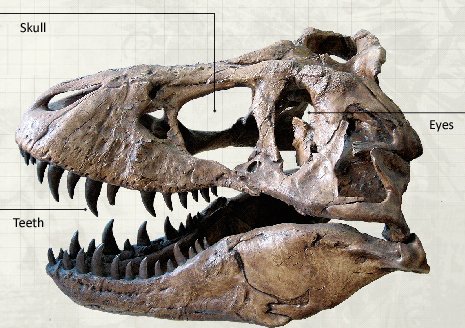 Skull: T. rex’s head was massive and boxy, unlike the relatively slender skulls of other theropods. To reduce weight, it had numerous openings, called fenestrae.

Teeth: Most theropods had blades for teeth, often with serrations like a steak knife. T. rex had railroad spikes for teeth, capable for driving down deeply and easily removing as much as 100 pounds (45 kg) of flesh in one gulp.

Eyes: The eyes of most theropods were set in the sides of triangular skulls, limiting their forward view. But T. rex looked straight forward, with excellent 3-D vision, because his eyes were set in a broad flare at the back of his skull.

So with this kind of arsenal, what exactly did Tyrannosaurus rex hunt after the Fall? Or was he too big even to hunt at all? Some paleontologists have argued that T. rex was too big and heavy to run fast enough to catch prey and that his blunt teeth and tiny front limbs make more sense for scavenging rather than active hunting.

More evidence, though, favors a more active predatory behavior. For example, none of today’s big terrestrial carnivores are pure scavengers. Most big predators both scavenge and hunt. And if T. rex and his kin weren’t taking down the large herbivores, who was? The other theropods in the same rock layers as T. rex are just small fries. If these layers reflect what was in the same pre-Flood ecosystem, and if T. rex was only a scavenger, then the large herbivores, such as horn-faced ceratopsians or duck-billed hadrosaurs, had no large predators.

Another point is that T. rex’s stereoscopic eyesight is great for determining distance to a target and would have been less necessary for finding corpses (which obviously don’t move).

T. rex’s sense of smell appears to have been excellent, too. In particular, the portion of the brain dedicated to smell was greatly enlarged,3 a benefit for both hunting and scavenging.

Several analyses of the legs and feet of T. rex support modest running speeds, probably between 11 and 25 mph (18–40 km/h). The more lightly built juveniles could attain the higher speeds. Based on a discovery of five skeletons found together in Montana, the juveniles may even have hunted in packs. At these speeds, which are faster than most human runners, T. rex could easily match or outrun hadrosaurs and ceratopsians.

Although many puzzles remain, with God’s Word in hand, we are beginning to see even more ways that the Creator has wondrously displayed His power and majesty.

Boosting the argument that T. rex was a predator are potential physical evidences of failed T. rex attacks. For example, a juvenile Edmontosaurus (one of the duck-billed dinosaurs) on display at the Denver Museum of Science and Nature shows some interesting damage to one of the spines of a tail vertebra. The broken spine displays what appears to be a bite mark that actually healed over with new bone. Amazingly, one object that fits into the broken spine: a T. rex tooth!

If this interpretation is correct, then sometime before the Flood, a Tyrannosaurus rex lunged at the young duck-billed dinosaur. By skill or providence, the little Edmontosaurus escaped a direct hit, though it bore a scar from its attacker. Later during the Flood, this animal was catastrophically buried, hidden underground until it was discovered by scientists.

Although many puzzles remain, with God’s Word in hand, we are beginning to see even more ways that the Creator has wondrously displayed His power and majesty throughout the earth (Romans 1:20). His works in the past testify not just to His creativity and beautiful design but also to “the terror of the Lord” (2 Corinthians 5:11; see Hebrews 12:29).

If we have eyes to see, even this “tyrant lizard king” points us to the true King and Judge of the earth, who hates sin, who cursed the cosmos because of Adam’s rebellion, and who will one day judge every sin and right every wrong.

T. rex by the Numbers

Marcus Ross is the assistant professor of geology and assistant director for the Center for Creation Studies at Liberty University. He holds a masters in paleontology and a PhD in geosciences from the University of Rhode Island.
Previous Article The Danger of BioLogos Next Article Hypsilophodon—Least but Not Last