Doctor Who and Dinosaurs

What’s wrong with this picture? (Evolutionists critique Doctor Who.)

Dinosaurs, a perennial favorite in pop culture, finally made an appearance last week in BBC One’s revived television program Doctor Who. After all, Doctor Who has free run of time and space, so meeting up with dinosaurs was only a matter of, well, time! 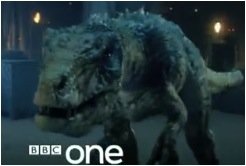 One of the Cretaceous critters featured in “Dinosaurs on a Spaceship,” the 2nd episode of Doctor Who (series 7). Paleo-bloggers complain that this fellow and his companions are not the fluffy-feathered bird-handed flesh-rippers evolutionists “know” they were. IMAGE from BBC One TV trailer embedded at blogs.smithsonianmag.com (Be sure to watch the whole trailer, but if you, like River Song, can’t abide spoilers, wait until you’ve seen the show to read the blog.)

“Dinosaurs on a Spaceship,” episode 2 of series 7, treated those who love Doctor Who to a delightful program packed with comedy, drama, and a bit of the dark side. (That’s it: no spoilers here! But if you hate spoilers, you might want to delay reading the sources of this news item until you’ve watched it yourself.) In the wake of the episode's debut, dino-bloggers such as free-lance writer Brian Switek and the writers of “Love in the time of Chasmosaurs,”1 while admitting the program was pretty well-done, took the show to task for its “errors.”

First of all, Switek wrote, “My apologies to the Doctor, ‘pterodactyl’ isn’t the proper term for these animals. The proper general term for these flapping archosaurs is ‘pterosaur.’ ‘Pterodactyl’ is an outdated term derived from the genus name of the first pterosaur recognized by science, but the term isn’t used by specialists anymore. It’s time to put ‘pterodactyl’ to rest.” Of course, within the science fiction world, the Doctor can travel virtually anywhere in space and time, so nothing he says is really out of date, and scientific terminology, which is man-made, changes all the time.

More troubling to evolutionary paleontologists and those who blog about their beliefs is the distinct lack of feathers on the Doctor’s Cretaceous castaways. One blogger wrote, “Alas, Doctor Who trotted out the usual silly Jurassic Park-esque bunny-handed monstrosities, virtually devoid of feathers.”2 Concerning a young Tyrannosaurus, Switek writes, “Sadly the juvenile tyrant is neither fuzzy nor sufficiently awkward-looking.” He believes fossil evidence indicates that such juveniles were not only “leggy” and “slim” but also that they were “fluffy flesh-rippers.” (Fossils of Yutyrranus are among those that appear to have not feathers but some sort of artifact best termed “dino-fuzz.”)

More troubling to evolutionary paleontologists and those who blog about their beliefs is the distinct lack of feathers on the Doctor’s Cretaceous castaways.

The raptors in the show also suffered from “insufficient feathery coats,” Switek writes, adding “Filmmakers seem reluctant to drape feathers over dromaeosaurids, but . . . we know that these dinosaurs had exquisite plumage covering almost their entire body. If you’re going to have raptors, they should be intricately feathery.” The presumption that dromaeosaurids—the family of “raptors”—were “intricately feathery” comes from a combination of “dino-fuzz” (such as tufts of filaments on Sinornithosaurus, but without the anatomical characteristics of actual feathers) mixed with the evolutionary determination that birds must be the evolutionary descendants of dinosaurs.

Evolutionists since Darwin have desperately needed evidence that feathers evolved from something. Darwin himself commented, “The sight of a feather in a peacock’s tail, whenever I gaze at it, makes me sick!”3 Furthermore, evolutionists have been unable to document evolutionary progression in feather morphology over time, despite their insistence that filaments like these were the evolutionary prototypes of actual feathers. And some fossils with clear anatomical evidence of genuine feathers, such as Microraptor gui (see Did Microraptor gui Invent the Biplane Before the Wright Brothers?), are simply fossils of true birds, such as the ones in your backyard.4 Only evolutionary imagination connects these dots. The Bible records God’s eyewitness account that he created flying creatures—which includes of course birds—the day before He created land animals—which includes dinosaurs—and man. Thus only the grossest of biblical compromise can suppose that birds evolved from anything, including dinosaurs.

So creationists who enjoy good science fiction can continue to relegate the comments about millions of years of evolution in our favorites to the category of “fiction,” knowing full well that the God of the Bible has told us the truth. Meanwhile, we can also chuckle that at least this time filmmakers chose to ruffle the feathers of the paleo-bloggers by failing to jump on the “intricately feathered” bandwagon.