Since May 19, theaters worldwide have been screening the new blockbuster film from Walt Disney Pictures, Dinosaur. 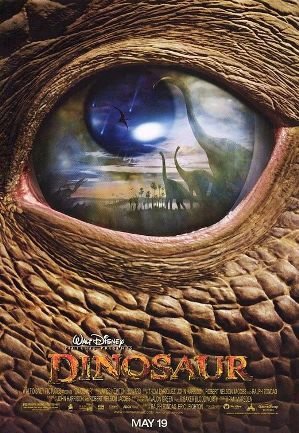 Since May 19, theaters worldwide have been screening the new blockbuster film from Walt Disney Pictures, Dinosaur. It joins many recent Hollywood movies (Jurassic Park, The Lost World, etc.) that have presented dinosaurs in an evolutionary context. With Dinosaur, Disney uses even more remarkable special-effects and computer animation than its predecessors. While the “photo-realism” of the $100-million film makes it a definite eye-popper, undiscerning eyes might not catch the Darwinian subtleties of the film.

The story centers around a young Iguanodon dinosaur named “Aladar.” Along with some other dinosaurs, he survives the impact of an asteroid that devastates earth. Following the belief of many evolutionists that an asteroid may have led to the extinction of dinosaurs about 65 million years ago, the film shows no humans, who supposedly evolved much later in the evolution timeline.

In the new harsh climate after the asteroid impact, with little food and water, the dinosaurs are seen in a constant struggle for survival. Accordingly, the movie’s violence is quite graphic (starting right with its terrifying opening sequence). For a so-called “family” film, the violence is far too intense for children; even though the (talking) dinosaur characters are computer-generated, they appear very real, as does the violence inflicted on them.

Background to the Making of the Film

The idea of a computer-animated dinosaur film has been bandied about for more than 10 years at the Disney company, but the technology to produce the stunning visual effects was born just a few years ago.

One of the film’s directors, Eric Leighton, said that he and his collaborators wanted to learn as much about dinosaurs as possible, but he candidly admitted that he would “cheat like h---” to tell a story because he wasn’t producing a documentary (USA Weekend, May 14, 2000). In a press kit, Disney publicists also acknowledged that the film “intentionally veers from scientific fact in certain aspects.” Indeed, the movie “cheats” not only with some of the ways the dinosaurs are depicted, but more importantly in the way they are presented in an evolutionary context.

The computer-generated characters are combined with real-world backdrops to create a “photo-realistic” look. Film crews traveled the globe to record dramatic nature backgrounds, which are blended with the computer-animated dinosaurs. Disney declares that the extraordinary visual effects—totaling well over $100 million to create—make the film an “instant classic.”

The dinosaur Aladar —separated from his family as a hatchling—is raised by a group of lemurs. Lemurs are classified by evolutionists as primates (“prosimians” to be more precise). Although evolutionists admit that, in their timeline, lemurs appeared on earth long after the dinosaurs disappeared, the filmmakers wanted to make an evolutionary point that these lemur primates “would inherit a legacy from the dinosaurs” (USA Weekend, May 12). In other words, the movie implies that primates, like lemurs (and thus humans as well) trace an evolutionary ancestry that goes back to the dinosaurs.

Interestingly, Aladar is mammalian in appearance. From the side, his head resembles the “Przewalski’s horse” from Mongolia. Also, the name Aladar closely resembles the name of the famous race horse “Alydor” of the late 1970’s. Perhaps this is another evolutionary hint provided by the film’s creators that reptiles—like dinosaurs—eventually evolved into mammals. Or it could be a marketing strategy to make Aladar more likable to the audience.

The film’s view of “survival of the fittest” seems to fit with the beliefs of a growing number of New Age evolutionists.

The main theme that recurs in Dinosaur is that the key to “survival of the fittest” is being compassionate and cooperative, as Aladar often is. In other words, rather than portraying Darwinian competition as necessary for survival, the movie’s central theme is that “cooperation” is essential to stay alive. Aladar’s compassion for the other dinosaurs brings him into conflict with Kron, the harsh leader of this dinosaur herd of asteroid survivors. The film’s view of “survival of the fittest” seems to fit with the beliefs of a growing number of New Age evolutionists, whose credo is that we are all part of nature and should get along.

One of the film’s writers, Shirley Pierce, acknowledged: “I really liked the theme of the film that survival of the fittest includes having the most compassion.” Of course, orthodox Darwinian evolutionists say that the strongest—not the most gentle—would more likely survive in harsh conditions, with the best characteristics of the surviving animals being passed on to the next generation. The film’s producers therefore present a sanitized, New Age version of evolutionary thinking. In reality, Darwinian evolution is a violent view of nature, described by Tennyson as “red [with blood] in tooth and claw,” and is the process that drives macro-evolution.

The film’s kinder, gentler approach to the Darwinian doctrine of “survival of the fittest” doesn’t mean that the film avoids violence. The scenes featuring the fierce Carnotaurs and also a pack of savage raptors are far too scary for children. It was therefore not surprising for us to learn that the movie’s story came from the mind of Walon Green, who wrote the screenplay for one of the most violent films ever made, The Wild Bunch (although Dinosaur—while quite intense and violent—lacks the bloody, gratuitous elements of that 1969 film).

The film’s happy ending even has an evolutionary theme. Codirector Ralph Zondag explained that he didn’t want to end on a disappointing note, and that even though dinosaurs were to eventually vanish, they paved the way for other species as we know them today (Disney Magazine, Summer 2000). Such an ending also paves the way for a sequel featuring the dinosaur survivors.

What the Bible Says About Dinosaurs

If you understand and accept the Bible’s timeline of history, it is actually quite easy to explain dinosaurs and their “mysteries”:

There is considerable evidence that supports the Bible’s account of the history of all living things, including dinosaurs. For example, carvings and paintings of dinosaur-like creatures are found throughout the world—evidence that man and dinosaur have lived together. Also, unfossilized dinosaur bones in Alaska and a T-rex leg bone with red blood cells have been discovered! Evolutionists proclaim that dinosaurs died out 65 million years ago, so these bones and red blood cells present a real enigma to them—these should not even be preserved today. This is not at all puzzling to creationists, for these discoveries provide compelling evidence that dinosaurs roamed the planet in recent times, just as predicted by the creation model (see “Dinosaur Soft Parts ”).

There is more “make believe” to the story of Darwinian evolution than there is to the storyline of the movie Dinosaur. Nevertheless, with Dinosaur, Disney is promoting a harmful evolutionary and New Age worldview (although this is not as overt as the Jurassic Park movies). Once again, millions of children will be subjected to the false teaching that dinosaurs fit within an evolutionary framework.

This evolutionary indoctrination will be even more pronounced when young people (and adults) purchase Dinosaur-related toys and merchandise and read their accompanying text. Most will not know that the Bible offers the better explanation about so-called dinosaur “mysteries.” The Southern Baptist Convention in the United States thus has yet another reason to continue its call to members to boycott Disney products and attractions because of the company’s ongoing anti-Christian and anti-family attitudes and policies.

Since Hollywood movies, TV programs, museums, and evolution-based science texts constantly use dinosaurs to “support” evolution, it’s important that Christians have answers in a dinosaur-crazed culture. After Christians present the above information to their friends and family, perhaps the unsaved of them will be more prone to listen to what the rest of the Bible claims —including its gospel message—and for the puzzled Christians they talk to, they will become more confident of their faith.