While evolutionists are convinced that dinosaurs evolved to rule the “Age of Reptiles” and to leave their everlasting legacy by evolving into birds, they are not in agreement about when these extinct beasts first made their appearance. Six vertebrae and a part of a humerus (upper arm bone) found in the 1930s in Tanzania have been reexamined and admitted to the “dinosaur hall of fame,” extending the evolutionary history of dinosaurs back “possibly 15 Myr [million years] earlier”1 than previously thought. 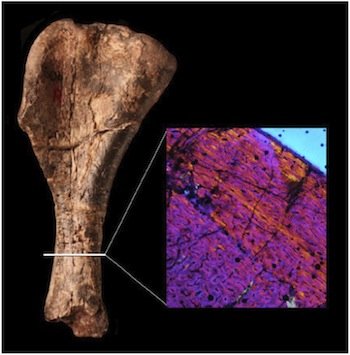 This fossilized humerus has a pointy protrusion, seen on the left in this photo, called the deltopectoral crest. To this bony prominence, commonly seen in dinosaurs deemed by evolutionary paleontologists to be more primitive, shoulder muscles attached. The bone has an internal structural pattern also common in dinosaurs. The microscopic fibers appear to have been laid down in a disorganized fashion typical of a rapidly growing animal. Image credit: Natural History Museum, London, through www.livescience.com.

Paleontologist Rex Parrington found the bones near Africa’s Lake Nyasa (now called Lake Malawi) in the 1930s, but their identity remained in dispute. Since they were recovered from rock layers commonly thought to be older than any known dinosaur fossils, researchers at the Natural History Museum, London, in the 1950s did not publish the results of their examination. Hans-Dieter Sues of the National Museum of History in Washington, DC, explains, “I first saw the bones in the 1970s when the late Alan Charig (one of the co-authors) showed them to me. At that time none of his colleagues would accept that dinosaurs had appeared so early in geological history.” Now, by comparing the shape and internal microscopic structure of the bones with other dinosaur fossils, researchers have finally published their conclusion that the bones really did belong to a dinosaur. Its new “saurus” name—Nyasasaurus parringtoni—memorializes the place of discovery and its discoverer.

Dinosaur fossils are found primarily in the Late Triassic, Jurassic, and Cretaceous rock layers. The “earliest undisputed” dinosaur fossils are from Argentina and are conventionally dated at around 230 million years. “Previous to this find, all the oldest dinosaurs were all equally old from the same place in Argentina, and those sediments are about 230 million years [old],” explains lead author Sterling Nesbitt. “So this pushes the dinosaur lineage or the closest relative to dinosaurs all the way back to the Middle Triassic. This is our best evidence of a Middle Triassic dinosaur.”

The discussion of how old the dinosaurs really are is important for evolutionists because they need to establish an evolutionary ancestry from simpler creatures. Thus it is inconvenient to have these impressive animals appear too suddenly in the fossil record. There have been disputed reports of dinosaur footprints in rock dated as early as 250 million years,3 but the authors note in the their Biology Letters paper that all such evidence of very early dinosaurs—prior to this discovery, that is—have “proved to be non-dinosaurian, referable to taxa with convergent morphology, or ambiguously identified.”4

The evolutionary world is pleased with this discovery as the paucity of dinosaur fossils with such an early age suggests to them that dinosaurs had evolved but hadn’t yet risen from obscurity to cover the globe with their dominant presence. “If the newly named Nyasasaurus parringtoni is not the earliest dinosaur, then it is the closest relative found so far,” says Nesbitt. “They were a unique group, but they didn't evolve and take over terrestrial ecosystems immediately. Most of what we see in museums are from the Jurassic and Cretaceous when they did dominate — at their origins they were just a part of the radiation of Archosaurs [animals such as crocodiles and dinosaurs].”

Despite these conclusions, this study does not demonstrate the gradual evolution of dinosaurs.

Despite these conclusions, this study does not demonstrate the gradual evolution of dinosaurs. First of all, the dates themselves are based on unverifiable assumptions. Secondly, the assumption that dinosaurs had to evolve over millions of years and then continue evolving to improve their earthly dominance is a story built on the imaginary presumption that animals evolved from simpler kinds of animals. In fact, no such evolutionary transitions have been documented. And finally, the fossils of various sorts of dinosaurs show only variations among dinosaurs, not evolutionary progression from non-dinosaurs to dinosaurs to birds. Nothing about a deltopectoral crest (see photo caption), for instance, indicates a dinosaur is millions of years more ancient than other dinosaurs. The bony detail is simply a feature of dinosaurs that paleontologists have decided must be primitive because they must construct an evolutionary tree of life that preserves their worldview.

Based on biblical history we know that all kinds of land animals, which would have included dinosaurs, were created along with Adam and Eve on the Sixth Day of Creation Week, without evolution, about 6,000 years ago. They, like other animals, varied within their kinds as they reproduced “after their kinds” over the years. The global Flood buried billions of organisms, and the order seen within much of the fossil record is a record of the order of burial of animals and plants as various habitats were overcome by rising waters and catastrophically buried in tons of sediment.

Even the finding of footprints fossilized in layers deeper than corresponding animals is consistent with the global Flood model, for many animals fleeing rising floodwaters would have scrambled to temporary safety, leaving their tracks in the mineral-rich water-soaked sediments, before finally being overcome. Nyasasaurus, therefore, understood in the light of biblical history, was simply one of the earlier dinosaurs to be buried.