In the Footsteps of Giants

It seems difficult to explain the formation of dinosaur tracks during the Flood. A closer inspection of the details, however, demonstrates that the Flood is a more reasonable explanation.

Millions of dinosaur tracks have been discovered in sedimentary rocks all over the world. Evolutionists have naturally interpreted these tracks within their belief system, assuming they represent normal animal behaviour some one hundred million years ago. On the other hand, the Bible makes it clear that all dinosaurs living at the time, except those on the Ark, perished in Noah’s Flood. At first glance, it seems difficult to explain the formation of dinosaur tracks during the Flood. A closer inspection of the details, however, demonstrates that the Flood is a more reasonable explanation.

First, individual trackways (defined as more than one track from the same dinosaur) are, all over the world, almost always straight.1 Normal animal behaviour should often involve meandering tracks, as readily observed by animals making tracks in the snow. Straight trackways indicate that the animals were fearful, as if fleeing from a catastrophe.

Researchers recently found forty straight, parallel trackways of two types of large plant-eating dinosaurs in southern England.2 The trackway of a large meat-eating dinosaur was also discovered nearby, going in the same direction.3 These trackways provoked a predator-prey interpretation by the evolutionists. But the tracks could just as easily, if not better, be interpreted as different types of dinosaurs, all fleeing the same event in the same direction.

Tracks are found only on flat bedding planes.5 The discovery of the recent track in England just mentioned provides a good example. This favours rapid sedimentation forming flat strata. Erosion over even hundreds of years in the evolutionary scheme would have produced at least a hilly topography, exposing several bedding planes. We should observe trackways on different bedding planes, traversing up hills and down into valleys.

These unusual characteristics of dinosaur tracks do not fit well with normal animal behaviour.

These unusual characteristics of dinosaur tracks do not fit well with normal animal behaviour. The evidence agrees better with a time of worldwide stress on dinosaurs.

How can the tracks be explained within the Flood? Since the tracks were made by live dinosaurs, they had to have been made during the first 150 days of the Flood, because all air-breathing animals that lived on land perished by that time.6 In the Rocky Mountains and high plains of North America, dinosaur tracks are often found on top of hundreds to thousands of metres of sedimentary rock that had already been laid down in the Flood. It is known from erosional remnants that the tracks were buried by many hundreds of metres of sedimentary rocks laid down on top of them.7 These later sediments were subsequently eroded down to the level where we find the tracks. This great erosion fits with the later stages of the Flood, as the water retreated off the rising continents into sinking ocean basins.8

Flood went up and down 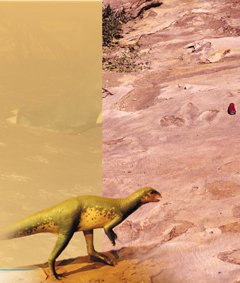 Three out of a series of five dinosaur tracks (two badly eroded) forming a straight trackway on a bedding place in north-east Wyoming, USA.

The Flood was a complex event; the waters did not smoothly cover all the pre-Flood land and then gently retreat. There were forces at work that would have caused rapid sea-level oscillations during the general rise of the early floodwater. Besides tides, the sea level would have rapidly risen and fallen, due to vertical shifting of the Earth’s crust and strong currents sweeping across the shallow landmasses. Geophysicists John Baumgardner and Daniel Barnette modelled currents on a totally flooded Earth.9 They began with all the water at rest. Within a very short time, the Earth’s rotation would cause strong currents of 40 to 80 m/sec (90 to 180 mph) over the shallowly submerged continents. But most interestingly, they found that in some areas sea level fell by hundreds of metres and intersected the bottom. This pattern moved so slowly that the exposed land would have persisted for many days, but with rapidly fluctuating sea level at the edges.

When were dino tracks formed?

The large region in western North America where the tracks are found would have started as a deep basin early in the Flood. The basin would have rapidly filled with sediments, “shallowing” the area. The sediments would have become exposed for a while as the sea level fell due to one of the mechanisms mentioned above.10 Desperate dinosaurs would likely have found only a series of shoals and banks. Either swimming, floating on debris mats, or trapped on higher land nearby, the adult dinosaurs would have climbed onto the freshly deposited sediments, made tracks, and quickly laid eggs. When the water rose once again, they would have desperately tried to escape, forming straight trackways on single bedding planes. The rising floodwaters would also have rapidly buried the tracks—a necessary condition for preservation. In fact, the very existence of dino tracks is evidence for rapid burial.11

We see, once again, how what seems like an “insoluble problem” for the Biblical history of the world is resolved by a “closer look.” Rather, we quickly discover that the tracks are a significant problem for the evolutionary interpretation. Not only that, but, once we put on “Bible glasses,” the facts about dinosaur tracks are seen to be consistent with this real history, and thus are strong evidence in its support.

What about tracks on multiple bedding planes in a local area? 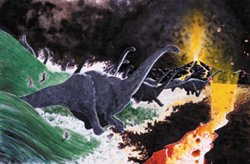 Geologists have discovered that dinosaur tracks are occasionally found on bedding planes at more than one vertical level in a local or regional area. The same situation occurs with dinosaur eggs. The most “difficult” (for Flood geology) occurrence of multiple planes of tracks is in the Jindong Formation, South Korea.1 In this formation, over 100 dinosaur trackways have been discovered on numerous different thin bedding planes in a strata sequence 100 to 200 m thick. Dinosaur track expert Martin Lockley explains the occurrence of dinosaur tracks as representing ‘ … groups or herds of subadults and adults passing through the region on purposeful local or long-distance migrations (that is, not milling around or browsing locally).” 2 Can the Flood explain such a vertical sequence of tracks?

Actually, it is not too difficult. As the main text explains, the Flood involved oscillating sea levels. In some places, this would have forced dinosaurs to move back and forth on the exposed land. A thin layer of sediment would have been laid during each rise, and the dinosaurs would have walked back over the same area during each fall of sea level. In the case of the Jindong Formation, one could expect that the exposed land would have been quite small, so that the dinosaurs would have walked over the same area, i.e. containing previously-made tracks. A similar sequence is suggested for multiple egg horizons, which occur on far fewer horizons than tracks in a local area.

There is substantial evidence favouring the Flood interpretation over Lockley’s. Within the evolutionary worldview, a sequence of dinosaur tracks made in strata 100 to 200 m thick would be expected to have been laid down over a long period of time, perhaps several million years. This being the case, one would expect many types of dinosaur tracks. Actually, the tracks on all these many bedding planes are similar on each horizon, and Lockley deduces they are from one species of dinosaur. This would be a nigh-impossible occurrence within the evolutionary scenario, but expected within the Flood model.