Image by Kevmin, via Wikimedia Commons

Hell ants may have skewered prey with vampire-like scythes to drain their “bug blood.”

Locked in amber around the world are countless tiny flowers and small animals ranging from insects to lizards. Among these are hell ants—extinct ants with scythe-like jaws that moved upward in a vertical plane rather than horizontally. However fearsome these sound, you might well wonder how such an ant could eat. Detailed images of a newly discovered species of hell ant in Burmese amber may hold the answer.

All living ants—and lots of fossilized ones—have pincer-like mandibles that converge in front of the face. Their mandibles serve many functions—cutting leaves, digging, carrying their young, and ripping off bits of food from either a plant or dead animal. Since no living ants have vertically oriented mandibles, scientists can’t be certain how hell ants used them, but now they have some good clues.

Hell ants have been found in amber deposits in Burma, France, and Canada. Scientists Philip Barden, Hollister Herhold, and David Grimaldi have recently discovered a new species to add to the list. They found it in amber from a mine in Myanmar. After studying the unusual features of the ant’s head with modern imaging techniques, they thought its name should reflect a vampire-like nature. Linguamyrmex vladi is a name incorporating Greek for ant (myrmex), Latin for tongue (lingua), and vladi to commemorate the Wallachian ruler Vlad III, whose execution-style inspired his nickname Vlad the Impaler and his fictional avatar Count Dracula.

Though no known living species of ant has vertical-moving mandibles, Linguamyrmex vladi resembles modern species of trap-jaw ants, such as Odontomachus bauri, in that it has little hairs near the jaw. In the trap-jaw ant, disturbance of these hairs triggers the jaws to suddenly swing into action. The trap-jaw ant snaps its jaws together to grab prey or pinch an attacker. Linguamyrmex vladi’s mandibles cannot close together to grip prey, so how might they work? Well, the scientists’ best guess about how this hell ant eats is the reason its discoverers thought it needed a vampire moniker.

Close imaging of the amber-preserved fossil shows the mandibles have a concave inner surface.1 This suggests that the mandibles, when swung upward, would come together to create a trough through which a fluid—like “bug blood”—could flow toward the ant’s mouth. This would not be a very nourishing source of food, if that’s how the ant really ate. You see, insects don’t really have blood like ours, but instead have a watery body fluid called hemolymph. Spiders pump digestive juices into their victims’ hemolymph, breaking down muscle and fat to create a nourishing slushie, but hemolymph alone doesn’t seem like it would offer much. Barden admits that, until someone finds an insect impaled on a hell ant’s mandibles, its diet will remain a matter of speculation. Of course, there is the possibility that the hell ant only used its mandibles to skewer plant parts and allow the sugary fluid in them to flow into its mouth. But the vampire-ish impalement of unwary insects is plausible, and it makes better story—especially around Halloween! 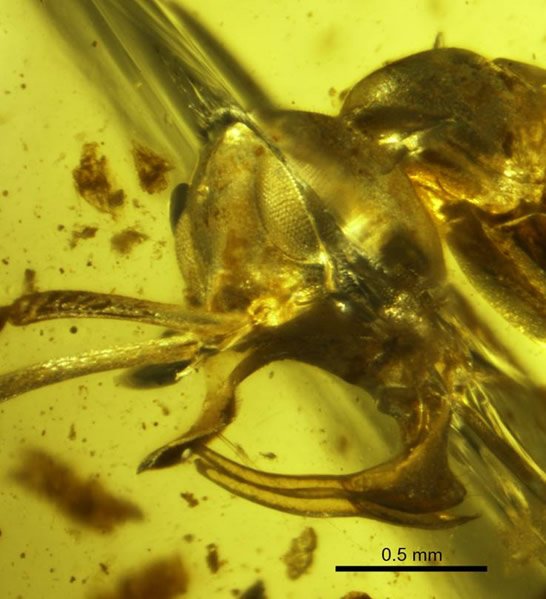 This profile of the Linguamyrmex vladi’s head shows its paired scythe-like mandibles. At their tip is the ant’s clypeal paddle, a backstop for the impact of the spring-loaded mandibles. A pair of hairs hanging from the paddle likely triggered the jaws to fire with the same amazing speed seen in the horizontally oriented mandibles of modern trap-jaw ants. Image by Kevmin, via Wikimedia Commons.

The idea that the hell ant’s mandibles slammed into and through something—whether an insect or piece of a plant—with a great deal of force is suggested by another interesting head appendage: a massive horn-like paddle projecting forward from the top of its head. This paddle is called a clypeal horn. Paired trigger hairs attached to the clypeal horn hang down between the mandibles. The clypeal horn would have provided a backstop against which the mandibles could slam, pinning prey or plants firmly against the paddle and allowing the fluid within to flow downward.

Linguamymex vladi’s clypeal paddle is even reinforced with metal. X-ray CT-imaging shows a very dense spot in the center of the paddle, most consistent with sequestered metals. Many insects are known to incorporate metal into body parts needing reinforcement. The zinc-tipped needle-like ovipositor of the fig wasp, used to drill through unripe figs, for instance.2 And the cutting edges of the mandibles of termites,3 ants, grasshoppers, beetles,4 and even a marine worm5 are strengthened or made more durable by metallic reinforcement. This dense region in the clypeal paddle is where the mandibles would strike. A metal-reinforced center would help protect the ant’s paddle from repeated impact.

Without worldview-based assumptions, the millions of years evaporate as unverifiable opinions.

The Burmese amber in which Linguamyrmex vladi was found is believed by evolutionists to be 99 million years old. This ant, as well as three more specimens thought to represent additional similar species, are preserved in amber samples from Kachin State’s Hukawng Valley housed at the American Museum of Natural History.6 Burmese amber has been a popular commodity since AD 100 when it was mined and traded with China. A new mine in Myanmar’s (Burma’s) Hukawng Valley was opened in 2001. The insect-rich amber from it preserves the detailed anatomy of many creatures that would ordinarily have been lost to the ravages of time. But how much time? The millions-of-years interpretation of the age of the amber’s strata is based on worldview-based interpretation of radiometric uranium-lead analysis of nearby zircon crystals as well as the presumption that pollen and other fossils from the same region are around 100 million years old. Without worldview-based assumptions, the millions of years evaporate as unverifiable opinions. The ants preserved in the amber did not evolve over millions of years but instead descended from the ants God created during Creation Week, about 6,000 years ago.

Hell ants share most anatomical features with other ants, but scientists do not think the modern ant is the hell ant’s descendant, only that all these ants shared a common ant ancestor. Scientists write that ant trap-jaws have “evolved at least four times in three subfamilies,”7 and that’s not counting the hell ants, in which the jaws spring upward, trapping the target against the ant’s clypeal paddle. Evolutionists would consider this spring-jawed behavior an example of convergent evolution—the independent evolution of the same useful trait in animals not thought to be of the same lineage. Yet despite the free use of the word evolution, there is no molecules-to-ant evolution in evidence here, just some really useful combinations of designs—trigger hair jaws and vertical trough-forming jaws paired with a backstopping reinforced clypeal paddle. Preserved in amber beside the Linguimyrmex vladi fossil is a larval insect, possibly slated to be the ant’s next meal. Yet there was a time—before sin spoiled the world—when ants like the hell ant would have used their fang-like mandibles to “attack” vegetation of some sort, as all animals did in the original world God created. In any case, it is always fun to discover yet one more of our Creator’s great designs—especially one with such a cool name.