Plant mites sail through the sands of time untouched by evolutionary change.

Three tiny arthropods have been found in amber from Triassic deposits in Italy’s Dolomite Alps. “Amber is an extremely valuable tool for paleontologists because it preserves specimens with microscopic fidelity, allowing uniquely accurate estimates of the amount of evolutionary change over millions of years,” says David Grimaldi, world-renowned expert on amber and fossilized arthropods.

Arthropod (insects, spiders, and crustaceans) fossils, according to evolutionists, are over 400 million years old. However, those in amber only dated back to about 130 million years (by evolutionary reckoning) prior to this discovery. These newly found tiny (2-6 mm) droplets of dried resin with their tiny passengers are dated, on the basis of uniformitarian assumptions about the age of surrounding rocks, to 230 million years. The two gall mites and a partially preserved fly are the first arthropod specimens found in Triassic amber.

“The ancient gall mites are surprisingly similar to ones seen today, says Grimaldi. “You would think that by going back to the Triassic you’d find a transitional form of gall mite, but no,” he adds. “Even 230 million years ago, all of the distinguishing features of this family were there—a long, segmented body; only two pairs of legs instead of the usual four found in mites; unique feather claws, and mouthparts.”

Because evolutionists think that flowers had not yet evolved when these creatures were trapped, they contend the specimens prove gall mites evolved before flowering plants.

Because evolutionists think that flowers had not yet evolved when these creatures were trapped, they contend the specimens prove gall mites evolved before flowering plants. “When flowering plants entered the scene, these mites shifted their feeding habits, and today, only 3 percent of the species live on conifers. This shows how gall mites tracked plants in time and evolved with their hosts,” explains Grimaldi. “There was a huge change in the flora and fauna in the Triassic because it was right after one of the most profound mass extinctions in history, at the end of the Permian. It’s an important time to study if you want to know how life evolved.” 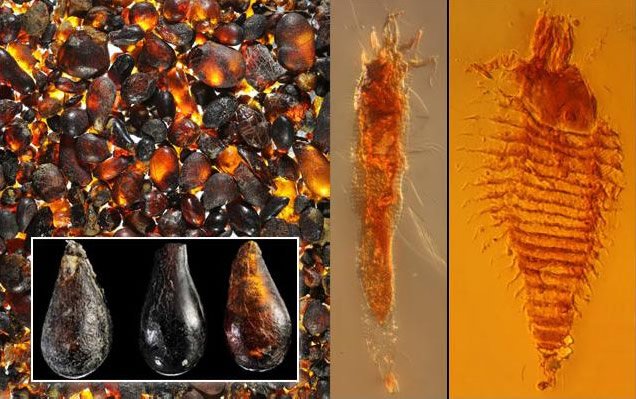 On the left are typical amber droplets found in the 70,000 or so recovered from an excavation in the Italian Dolomite Alps. On the right are close-ups of two species of gall mites, a kind of arachnid that commonly feeds on flowering plants, recovered from Triassic amber. These and a midge fly are the only amber-trapped arthropods recovered thus far. Because evolutionists think that flowers had not yet evolved when these creatures were trapped, they contend the specimens prove gall mites evolved before flowering plants and then “tracked” their evolution. However, 3% of modern gall mites subsist on non-flowering plants, and these gall mites look just like living ones. Arthropod expert David Grimaldi notes with surprise, “You would think that by going back to the Triassic you’d find a transitional form of gall mite, but no.” Left, Center, and Inset images by University of Padova/S. Castelli, Right image by A. Schmidt/University of Göttingen, via Science.1

Historical science requires scientists to interpret data memorializing the unobservable past. Evolutionary scientists, having a prior conviction that molecules-to-man evolution through random natural processes explains all we see in nature and the fossil record, interpret even this lack of evolution as evolution (as loss of information2 was an example in the previous item!). Grimaldi is amazed by the lack of transitional forms, but the biblical principle of being created to reproduce “after their kinds” precludes such transitions. Grimaldi notes that only 3% of gall mites still eat from conifers, yet the flower-eaters are still gall mites.

This discovery does not show gall mites evolved as flowering plants evolved, but rather that the ones in this amber happened to munch on conifers. Their preservation within Triassic amber does not prove that flowering plants did not exist elsewhere at the same time. Biblical history—with the creation of plants on the 3rd day of Creation week—indicates that flowering plants and conifers were created the same day. Many layers of sediment in the fossil record preserve organisms such as this, reflecting the order in which they were buried as habitats were overwhelmed by the turbulent rise of the floodwaters during the global Flood. Since flowering plants existed from Day Three onwards, they were around when the floodwaters buried the amber containing these gall mites, but they were simply buried a few weeks later during the Flood.

These bits of amber preserve these gall mites in exquisite detail. By demonstrating that gall mites fail to demonstrate evolutionary change over their supposed millions-of-years of existence, they provide a graphic affirmation of the truth of God’s Word.

Previous Article Belief in Human Evolution: Cause, Co-Conspirator, or Cure for Racism? Next Article News to Note, September 8, 2012