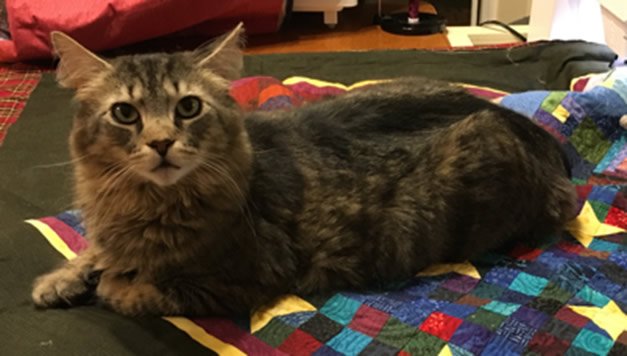 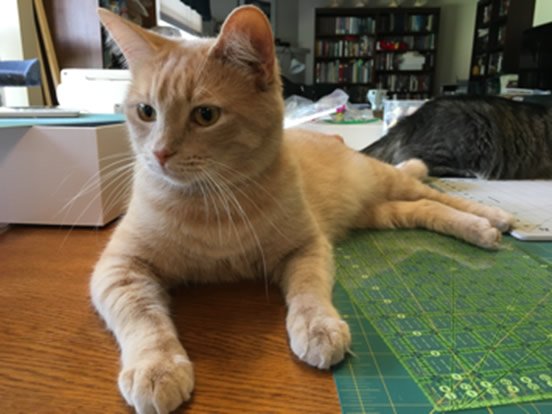 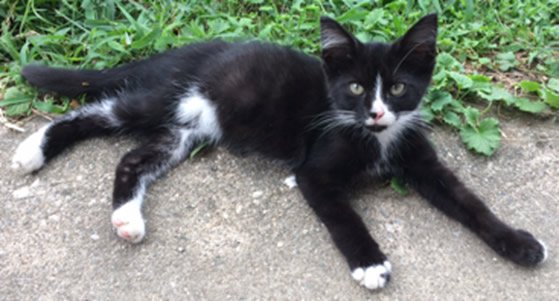 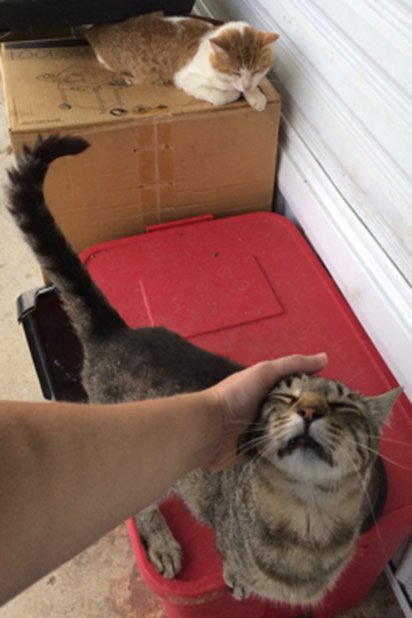 Here are the no-longer-homeless cats that live with our family. Images of indoor cats by Elizabeth Mitchell; images of outdoor cats by Ashley Hufford.

Cats—which inhabit almost every corner of my home—live on every continent except Antarctica. But it was not always so. When representatives of all air-breathing land animals boarded the Ark around 4,350 years ago, Noah’s historic collection needed only one pair of felines. They would not have been anything like modern domestic cats. That breeding pair contained the genetic information to produce the great variety of felines the world has seen since the Flood.2 That includes roaring lions and tigers and cheetahs (oh my!), the yowling feral cats in your neighborhood, and the indoor cats meowing on my quilts.

Animals reproduce and vary only within their created kinds, as described in the Bible and observed in biology. All the cat varieties we see today—big and small, cuddly and fierce—are descended and diversified from the cats on the Ark with Noah. This is supported by reproductive evidence: cats are all in the family Felidae. Though Felidae has two subfamilies, members of these two subfamilies can hybridize. Genetic evidence also supports this. Jong Bhak of South Korea’s Personal Genomic Institute in Suwon, coauthor of a study reporting the genomic sequence of the Siberian tiger, says, “Genetically all the cats are very close, so we need close genetic mapping to find the small differences that make them distinct.”3

After disembarking from the Ark in the mountains of Ararat, cats did their part to repopulate the earth. Cats, like all kinds of animals, were—according to God’s Word—originally created to be vegetarians. Carnivory began after Adam’s sin brought the curse of death and suffering into the good world God had created. Yet all cats now require meat in their diet. How can that be? What changed? 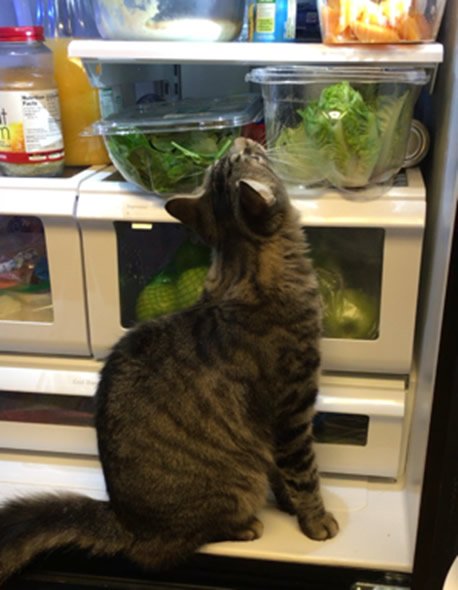 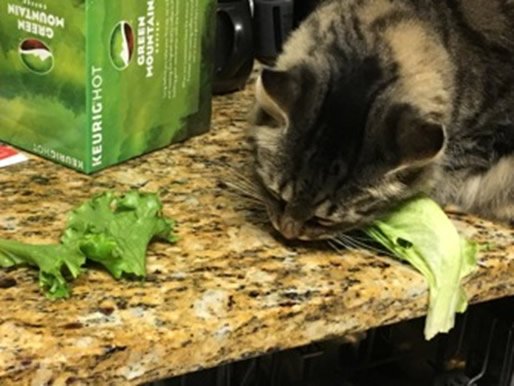 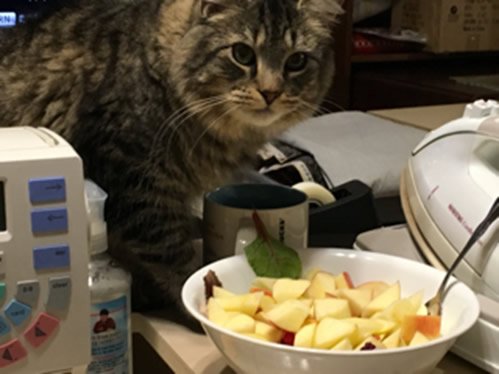 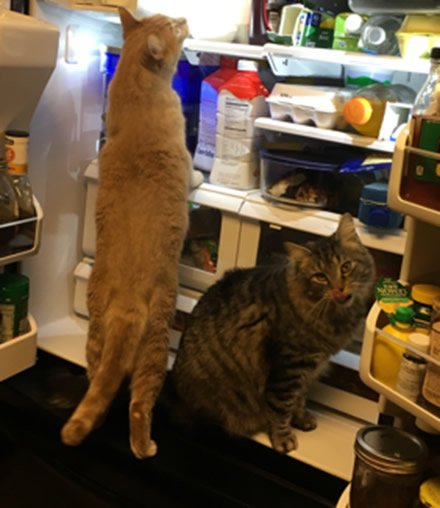 Slinky and Peaches will do anything for some yummy, raw spinach or ruffly lettuce. But they cannot remain healthy on a veggie diet. They—like all cats today—need taurine, a substance not available in plants. Images by Elizabeth Mitchell.

Well, Genesis 1:29–30 informs us that people and animals were designed to be plant eaters. Therefore, we can be confident that cats were originally able to derive all needed nutrition without eating meat. Sometime after the Fall, cats developed the need to eat meat or animal products. Unlike other mammals, cats cannot synthesize taurine, a vital amino acid derivative. Perhaps some pre-Flood plants provided this nutrient, or perhaps a mutation in the cat genome, carried by the pair on the Ark, made taurine synthesis impossible. Taurine is routinely added to commercial cat foods, including vegetarian ones, along with vitamin B12, which is produced by bacteria living in the digestive tract of many mammals.4 Since all cats need dietary sources of taurine, we can be reasonably confident that this nutritional requirement has existed at least since the time of Noah.

All the cats are unparalleled hunters, and here we are seeing some of the genetic reasons.

The need for meat has been no barrier to feline success. The cats that have populated the globe since the Flood have been genetically equipped to be successful carnivores. Discussing the cat genome, Bhak says, “All the cats are unparalleled hunters, and here we are seeing some of the genetic reasons.”5 Cats share many genes associated with strong muscle fibers, superior hearing, exceptional visual acuity and night vision, efficient protein digestion, and metabolism unusually well designed to cope with a high-fat diet. Well equipped for survival, cats have reproduced and varied to produce dozens of species in a wide variety of sizes and temperaments. Darwinian evolution is not needed to understand the many varieties of cats in the world, because the genetic information to produce them has simply been reshuffled and selected from the information available in the post-Flood world’s single breeding pair of cats.

As people spread out in the post-Flood world, cats were likely welcome camp followers and agricultural assistants. As good hunters, they could provide their own food. And all the better if the dinner they enjoyed often consisted of the rodents ravaging the grain of their human hosts. Examination of the collagen in ancient Chinese cats supports this picture, revealing that their diet consisted of both meat and millet—or something meaty that had eaten millet, like grain-ravaging rats. One of the cats studied was apparently older than the others and had a diet proportionately higher in millet than meat. This finding would be expected in a cat that—instead of hunting—got by on scavenged scraps or food provided to it.6 Apparently this ancient Chinese cat was still welcome when its hunting days were done.

Domestication of Our Feline Friends

The domestic cat—the focus of Cat Day—developed from the wildcat. Today’s domestic cats are generally smaller, less robust, and have smaller brains and shorter legs than wildcats. Evidence suggests that cats have been domesticated, to some extent at least, for thousands of years. Archaeologists have found a cat carefully buried beside a human in a Neolithic gravesite at Shillourokambos on the island of Cyprus.7 Archaeological evidence shows that domestic cats coexisted with people in a central Chinese agricultural village thousands of years ago.8 Egyptian art of the Middle Kingdom’s 12th Dynasty pictures a tabby cat munching a fish at a person’s feet under a chair, and this motif became common in the artwork of Egypt and ancient Greece.9

The cat’s need for a meaty diet and the human desire to store rodent-free food has worked well together. Cats that ravage rodent populations have long provided valuable services to farmers and seafarers alike. Medieval ships routinely carried cats. And the discovery of the Egyptian cat lineage in mitochondrial DNA as far away as the seventh century Viking port of Ralswiek alludes to the popularity of cats as traveling companions.10 As people traveled, cats comfortable around humans spread all over the world. Once arriving in their new locations, early domestic cats were also able to leave their genetic footprints in local wildcat populations. Genetic analysis corresponding with geography and ancient history shows that domestic cats spread through the world following ancient trade routes across land and sea.

Where and when did cats begin allowing humans to think they owned them? Wildcats are not particularly sociable. Many anthropologists believe that cats had a single ancient domestication event. However, archaeological discoveries suggest that cats were domesticated in more than one ancient place. A 2017 study of over 200 archeological cat remains worldwide has affirmed, on the basis of cat genetics and geography, that domesticated cats were disseminated from at least two places in the ancient world.11 Both Near Eastern and Egyptian lineages of Felis silvestris lybica—a subspecies of wildcat—contributed to the gene pool seen in domestic cats. Genetic analysis suggests the Near Eastern contribution has been there longer. The likelihood that cats developed into sociable, reasonably tame companions early on is suggested by the widespread finding of mitochondrial DNA markers of the Near Eastern cat lineage stretching across Anatolia in the remains of Neolithic, Bronze Age, and Iron Age digs. The Cyprus cat, for instance, derived from the Near Eastern lineage. The Near Eastern lineage is also found in a couple of places that suggests its early introduction to Egypt—in an ancient Roman/Egyptian port (Berenike) on the Red Sea and in one Egyptian mummified cat.12

The cat was apparently beloved to Egyptian “cat-people” long before the days of the great pharaohs and pyramids. Six cats have been found interred in one predynastic cemetery. And a different type of mitochondrial DNA marks most ancient Egyptian cats, indicating an independently domesticated lineage of the same subspecies. The Egyptian lineage left its mark throughout the Mediterranean world’s archeological sites, despite a ban on cat export from Egypt around 1700 BC.13 The Egyptian lineage overlaps that of the Near Eastern lineage in western Anatolia. Was it a friendlier cat than the local variety, or did ancient Anatolian cat lovers feel as clannish about their cats as Windows and Mac computer-people do about computers? We can only speculate.

Though cats may have domesticated themselves, people eventually opted to have some direct input in the process.

Though cats may have domesticated themselves, people eventually opted to have some direct input in the process. They began selectively breeding cats to get the coat color they liked. Both ancient Egyptian and later medieval artwork show the evenly striped mackerel pattern common among domestic cats. The mackerel pattern is produced in cats possessing the dominant form of the Tabby gene.14 But by 1758 Linnaeus described the wider, more irregular blotched pattern as a common domestic variation. This pattern is produced only in cats homozygous for the recessive form of the Tabby gene, suggesting that selective breeding had influenced the domestic cat population. Comparison of the genetic evidence for selective breeding in domestic cats to that in dogs suggests that humans began directing the breeding of dogs much earlier in history. (Some might suggest cats were already perfect as they were, but that would be a matter of strong opinion and generate unnecessary debate.)

The colorful history of the domestic cat, filled in by the latest paleogenetic study, illustrates many fun facts for cat lovers. What it does not reveal, however, is anything about Darwinian evolution. That all cat species and varieties have descended from the representative pair on the Ark is consistent with biblical truth. That all cats require taurine in their diet is understood from facts consistent with biblical truth. No new genetic information had to evolve to produce cats. God created it, in the beginning, and preserved plenty of it in the pair he brought to Noah before the Flood. In an ancient world so easily devastated by famine, cats predisposed to tolerate humans provided their pest control services and thus protected food supplies. And the human love for companion animals reaches back to antiquity. We can thank God for our furry friends and offer compassionate care for the less fortunate among them.