Flowers deep in the fossil record are just as advanced as flowers today.

Flowers preserved in amber from Myanmar (aka Burma) are not only breathtakingly beautiful but also demonstrate that Cretaceous complexity was the norm for flowering plants. Darwin considered such fossilized floral complexity and biodiversity to be an “abominable mystery” for evolution.1

These tiny Burmese blossoms—only a millimeter (about 3 hundredths of an inch) in diameter—were frozen in time by tree sap. “Here you have a hundred-million-year-old flower that looks like it was blooming last week,”2 says George Poinar, Jr., lead author of the report published in Journal of the Botanical Research Institute of Texas.

Not only do the amber-encased fossil flowers reveal fragile details of floral reproductive anatomy, the abundant flowers display different stages of their life cycle. “Here we have 18 flowers on one sprig,” says Poinar. “That number of flowers has never been seen before in a Cretaceous [flowering plant].”3 Looking forward to further study of the plants’ maturation process, Poinar adds, “Here’s something which hasn’t been seen before, and it doesn’t fit anything we know of today.”4

Though missing their petals, the flowers are so anatomically detailed that it is apparent Cretaceous angiosperms—conventionally dated as living 100 million years ago and found in a layer of the fossil record largely dominated by non-flowering plants—are unchanged in their anatomical complexity and method of reproduction compared to what we see today. 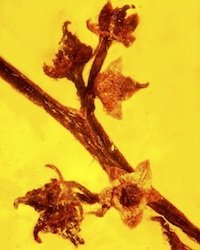 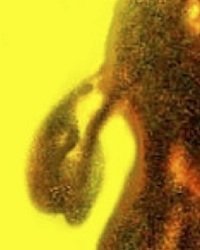 These tiny flowers preserved in Cretaceous amber from Myanmar reproduced just like flowers do today. Amber from Myanmar preserves many insects as well as these flowers, complete with their modern-like complexity. On the right are pollen tubes that were in the process of delivering the flower’s male gametes to fertilize the next generation when these tiny blossoms were coated in Cretaceous tree sap. Image: Oregon State University through Nature World News.

“The evolution of flowering plants caused an enormous change in the biodiversity of life on Earth, especially in the tropics and subtropics,” says Poinar. “New associations between these small flowering plants and various types of insects and other animal life resulted in the successful distribution and evolution of these plants through most of the world today. It’s interesting that the mechanisms for reproduction that are still with us today had already been established some 100 million years ago.”

There is no indication that the delicate-appearing Cretaceous flowers—dubbed Micropetasos burmensis—from the Hukawng Valley amber mine are primitive or in any way “less-evolved” than modern flowers. They bear similarities to several types of modern flowers, but they do not match any particular genus perfectly. Therefore, the researchers are not speculating about how these flowers are related to any particular sort of modern flower.

“In Cretaceous flowers we've never before seen a fossil that shows the pollen tube actually entering the stigma,” explains Poinar, in reference to the flower caught in the very act of reproducing after its kind. Angiosperm pollen, which contains male gametes, ordinarily sends out a pollen tube to transport the gametes to the stigma of the flower. Based on this flower preserved in amber, the process has not changed over the years. “This is the beauty of amber fossils,” Poinar says. “They are preserved so rapidly after entering the resin that structures such as pollen grains and tubes can be detected with a microscope.”

Flowers From The First

Because flowers are fragile they are not normally preserved as nicely in the fossil record as we would like. The presence of angiosperm pollen in Lower Cretaceous sedimentary rock has, however, long been an indicator of the presence of flowering plants at the time that sediment was laid down. Recent discoveries have extended the fossil evidence of angiosperm pollen down to Middle Triassic rock layers, pushing back the evolutionary date assigned to flower evolution yet another 100 million years.

Burmese amber has been a popular commodity since AD 100 when it began to be mined and traded with China. Around 1896 the insects preserved in the amber attracted attention. Like the amber mined in the past two millennia, the amber from the new mine in Myanmar’s Hukawng Valley, opened in 2001, is rich in insects. Insects in amber from this mine include a species of grasshopper known only from the Permian to Cretaceous fossil layers, which supports the assignment of the amber to the Lower to Mid-Cretaceous strata. The millions-of-years interpretation of the age of the amber’s strata, however, is based on worldview-based unverifiable interpretation of radiometric U-Pb analysis of nearby zircon crystals as well as the presumption that pollen and other fossils from the same region are around 100 million years old.

These “primitive” flowers are not primitive at all. They are just as complex as modern flowers and seem to reproduce the same way.

Darwin considered the floral biodiversity in the fossil record to be an “abominable mystery” as he could not understand how such variety could appear all at once through evolutionary processes. Assuming all flowering plants came from a common ancestor, evolutionists since Darwin’s time have puzzled over how so many sorts of flowers could evolve so quickly. This bouquet in amber does nothing to solve the evolutionary mystery, for these “primitive” flowers are not primitive at all. They are just as complex as modern flowers and seem to reproduce the same way.

The “abominable mystery” is actually only a mystery for those who are controlled by evolutionary presuppositions. Evidence of floral diversity deep in the fossil record is no surprise when the fossil record is viewed not as a timeline of evolving life-forms but the order of catastrophic burial of many organisms, largely associated with the global Flood less than 4,500 years ago. The billions of dead things preserved in the fossil record were for the most part buried as various habitats were overwhelmed by the often-violent rising Floodwaters.

While we cannot know the pre-Flood earth’s geography, the order and diversity in the fossil record suggest that certain types of ecosystems—perhaps more low-lying ones—were destroyed and buried before others. This is a reasonable and biblically consistent explanation of why the majority of floral fossils appear in higher strata, just as it explains the preponderance of marine invertebrates in lower layers and the distribution of vertebrates in the higher ones.

God created all kinds of plants on the 3rd day of Creation Week, about 6,000 years ago. All kinds of plants, flowering and otherwise, were created with the ability to reproduce and vary within their created kinds right from the start (Genesis 1:11–13; Exodus 20:11). Flowers did not have to evolve or to co-evolve with pollinating insects, as evolutionists generally assert, since pollinating animals were created the same week. Functional flowers have thus graced our planet from the very first week of its existence.