by Dr. Elizabeth Mitchell on May 19, 2012
Featured in News to Know
Share:
Email Using:
Gmail Yahoo! Outlook Other

Tiny insects pollinated plants in the “age of the dinosaurs.”

Amber from Lower Cretaceous rock in the Basque country of northern Spain has preserved several pollen-covered thrips. Thrips today eat pollen, mites, or plant juices. They may be considered pests, pollinators, or both. Of course there is no way to know the lifestyle of the varieties in the amber, but scientists consider them the first fossil proof of primitive pollinators.

High-resolution images reveal these 2 mm long flying insects were well equipped to collect and carry pollen. They have “highly specialized hairs with a ringed structure to increase their ability to collect pollen grains.” Bees are similarly equipped.

“We also see these ring setae, or ring hairs, in modern pollinators such as domestic bees and some flies,” explains X-ray synchrotron tomography expert Carmen Soriano. “At very high magnification, we can see that these hairs are mostly in the dorsal part of the thrips and that’s also where we observe most of the attached pollen. So, our theory is that these hairs would have been used by the female thrips to gather as much pollen as possible to take back to their larvae.”1

This is the oldest direct evidence for pollination, and the only one from the age of the dinosaurs.

Although “older” thrips have been identified in Permian rock, these pollen-encrusted specimens are dated 105-110 million years old by evolutionary reckoning. They have been assigned to a new genus, Gymnopollisthrips. “This is the oldest direct evidence for pollination, and the only one from the age of the dinosaurs,” says Soriano. “The co-evolution of flowering plants and insects, thanks to pollination, is a great evolutionary success story. It began about 100 million years ago, when this piece of amber fossil was produced by resin dropping from a tree, which today is the oldest fossil record of pollinating insects. Thrips might indeed turn out to be one of the first pollinator groups in geological history, long before evolution turned some of them into flower pollinators.” 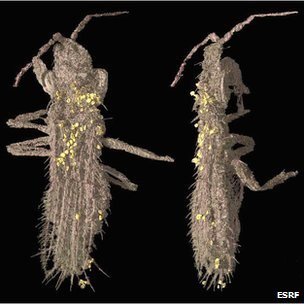 Researchers suspect the pollen came from gingko trees. Evolutionists believe flowering plants evolved about 90 million years ago, but gingko trees appear lower in the geologic column in Permian layers. So do thrips. The researchers suggest the insects could have used gingko ovules for a shelter and nursery, transporting pollen from male cones to female ovules to feed their young, thus pollinating gingkoes in the process. The pollen collecting equipment would thus be mutually advantageous for thrips and the sheltering gingko. 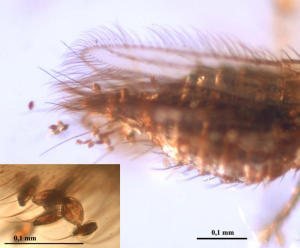 Pollen attached to the abdomen and wing of a thysanopteran insect in amber. Image from Enrique Peñalver, Instituto Geológico y Minero de España in Madrid through Science Daily.

Admittedly, this scenario is speculative. The pollen on the insect is a “smoking gun” that can only hint at the whole story. As co-author Conrad Labandeira admits, “To some degree all the evidence we have for insect pollination is indirect because we don’t have any insects ‘caught in the act’, so to speak. That would involve finding a structure, an ovule, with a reward such as nectar or pollen, and the insect with its mouth parts preserved inside that structure. That has yet to be found in the fossil record. So, we must build a circumstantial case that pollination took place. And I think our ambers are a good bet because we have these structures on the insects’ bodies that would only be the most parsimoniously interpretable as structures used for pollination.”2

Notice this researcher acknowledges the behavioral conclusions about these insects are conjectural because they cannot be observed. Yet the same should be said about the evolutionary conclusions. Flowering plants, gingkoes, thrips, and pollen all exist in the fossil record. And they likely interacted with mutual advantage within their (pre-Flood) ecosystems as living things do today. But there is no record of the evolutionary rise of any of them or any observable evidence that new kinds of organisms can evolve from simpler kinds. The fossil record documents the catastrophic burial of many living things but not their evolutionary appearance. 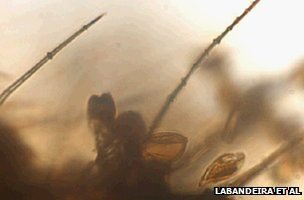 These well-preserved insects appear to have functioned prior to the Flood just like their modern counterparts. God created both plants and insects during Creation week, about 6,000 years ago, already able to reproduce after their kinds. We have His Word on it. Therefore, specialized features to facilitate pollination could have been provided by God whether or not the insect “needed” them, though we can infer from living thrips that pollen was a likely food source. Either way, neither the specialized insect features nor flowering plants had to evolve. Much of the fossil record reflects the order in which pre-Flood habitats were destroyed during the Flood. Flowering plants appear higher in the geologic column, suggesting the pre-Flood habitats in which they were prominent were engulfed a bit later than those in which the gingko and other nonflowering plants dominated.