Germophobes beware: a new study suggests that all adults have face mites. But did they follow us through evolutionary history?

If you are just getting used to the idea that you share body with countless microorganisms, as we recently discussed in “The Wonderful World of Bacteria in Your Body,” now is a good time to expand your horizons a bit more. By searching for tiny mites living in human facial skin by looking for their DNA, researchers from North Carolina State University have shown that all adults seem to share their pores with eight-legged Demodex mites. Researchers hope to use what they are learning to trace hominid evolutionary patterns through time.

What do those mites eat? How did you get them? What are they doing for you, or to you? No one knows, at least not yet! But the mites don’t seem to be doing any harm. Previous estimates put the prevalence of Demodex mites on living adult faces at around 10-20%, but those estimates were made by looking for mites, not the DNA footprints they leave behind as they navigate in your skin secretions. 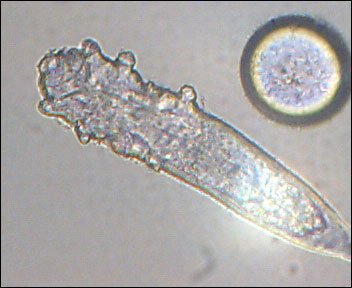 This is a Demodex face mite, like those collected at a Meet Your Mites event, intended to attract subjects willing to let North Carolina State researchers scrape their faces for mites. Did it evolve, or did God create this and many other kinds of harmless animals to fit countless habitats, even the nooks and crannies of our skin? See more (and video!), if you’re brave, in the Meet Your Mites gallery at http://mymites.yourwildlife.org/about/ Image: Wikimedia Commons

Demodex mites live not only in the skin of humans but also in the skin of many mammals. However, the particular species of Demodex seems to be unique to each. So, for instance, dogs don’t catch our mites and we don’t catch theirs. Actually the research team found that humans harbor not one but two unrelated species of mites, Demodex folliculorum and Demodex brevis. The first lives near the surface of the skin in your hair follicles. The second, Demodex brevis, lives much deeper, down in your sweat glands.

The North Carolina study did not look for mites on children but found that only 70% of the 18-year-olds sampled had facial mites, compared to 100% of people over 18. Most (but not all) studies have shown a greater prevalence of mites in adults than children. Therefore it seems unlikely that we simply pick up our lifetime supply from our moms as babies, even though puppies do get theirs from their mothers. And while it is assumed that person-to-person contact is required for transmission, it remains quite uncertain how mites gain a foothold in each person’s face.

Tracking face mites by tracking their DNA is not just a way to see what mites are present but is also a way to investigate their diversity. It turns out that Demodex folliculorum and Demodex brevis differ so much from each other that the team concludes that they share no recent common ancestor. This genetic diversity reflects the genetic diversity throughout the Demodex genus and is similar to the diversity seen within the genera of other insects like ticks. The authors write, “This diversity suggests Demodex is a relatively old genus and even that the divergence between the two named human-associated species, D. brevis and D. folliculorum, might be relatively ancient.”1

How sad that in order to make this already interesting bit of research somehow more relevant and newsworthy, the CBC science columnist felt she had to conjure its evolutionary significance.

The biodiversity of each species of Demodex tracked through DNA studies like this, the team hopes, may be a way to get a clue about the relationships of various living populations of people, perhaps helping to backtrack their migration patterns. Because the D. brevis species seems to occupy very isolated habitats deep in our pores, analysis of its genetic diversity may lead to better understanding of the way genetic variations develop within isolated populations. In fact, while the more superficial-dwelling D. folliculorum exhibits almost no genetic diversity, enormous diversity was found among D. brevis. One person in the study was colonized by two different varieties of D. brevis that genetically differed even more than D. brevis from people living in China and those in North America.

Clearly much might be learned from further investigations. And for most of us, perhaps, the most interesting information will be more about what these mites eat, how they live and reproduce, how we get them, and whether they help us in any way or are just harmlessly using our pores for their habitats.

During an interview on Canada’s CBC News program Here and Now, however, CBC’s science columnist Torah Kachur said that the D. brevis mite “actually evolved the perfect shape to wiggle in the pores.” This comment illustrates the popular and patently incorrect view that everything that exists in biology came about through evolutionary processes.

While we certainly do not know anything about the kinds of mites God created 6,000 years ago, we can be confident that they followed the “rules” that we infer from Genesis chapter one prevailed in the world He created. In other words, they must have been harmless, as God called all He had made “very good” (Genesis 1:31). And they must have been created fully functional, able to inhabit whatever ecosystems God intended them to, as the history in Genesis does not allow for millions of years of evolution. And the original mites, like all living things, must have only varied and reproduced within their created kinds. That is what we observe organisms doing today.

Scientists observe that there are many species of Demodex mites, each apparently suited—though no one yet knows how—to live in a particular mammalian host. There is no molecules-to-mites evolution in that discovery, just variations of this kind of mite. This is the sort of biodiversity that we expect to see among the living things God created.

Can these tiny animals tell us anything about our evolutionary history? Does their coexistence with humans mean they co-evolved with hominids and will track our divergent pathways from some hypothetical shared ancestor with chimps? The CBC science columnist suggests as much.

“We can use mite genetics to look at human evolutionary history, migration patterns, radiation patterns, that we see as well as distinguishing between populations,” Kachur says. Implying that tracking human population movements is just like learning about human evolution from ape-like ancestors, she says, “We know that mites exist on a lot of different mammals. There is a current study underway looking at the different primates. And you know face mites have probably been with us for our entire existence, our 6 million years of existence, for hominids. So we don’t even know what they eat, whether they could eat dead skin cells or bacteria or our secretions, we just don’t know, but the fact that they’re so universal—hey, maybe a column like this will inspire people to study face mites.”2 Thus, this science correspondent is erroneously treating speculations about a shared hominid evolutionary past as the equivalent of observable science in the here and now.

Again, nothing about Demodex mite speciation can reveal anything about a shared primate ancestor because nothing in science demonstrates—nor can it—any common ancestry between apes and humans. Much can be learned from the study of these mites. But what cannot be learned is anything about human evolution. How sad that in order to make this already interesting bit of research somehow more relevant and newsworthy, the CBC science columnist felt she had to conjure its evolutionary significance.

Previous Article Where Did Ebola Come From? Next Article Timely Tale Tells Why Leaves Turn, Or Does It?