“Partners in Slime”: Mucus and Our Viral Friends

Muco-viral symbiosis may be key to a ubiquitous immune system . . . but it’s not evolution.

Mucus, that gel-like goo coating the inside of our eyelids, sinuses, nose, mouth, throat, lungs, and digestive tract, is well known as a protective barrier between our bodies and the dirty world full of dust and bacteria. Mucus also protects the bodies of a wide variety of animals such as corals, snails, worms, and fish by trapping foreign debris and microbes. But microbiologists in Forest Rohwer’s laboratory at San Diego State University have discovered that mucus holds a sweet secret.

“This discovery not only proposes a new immune system but also demonstrates the first symbiotic relationship between phage and animals,” says Jeremy Barr, lead author of “Bacteriophage adhering to mucus provide a non-host-derived immunity” published in Proceedings of the National Academy of Sciences. “It will have a significant impact across numerous fields.”1

Most folks have heard that there are “good bacteria” and “bad bacteria,” meaning of course those that help us and those that make us sick. But friendly viruses sound to many people like an oxymoron. Not so. Bacteria-attacking viruses called bacteriophages are found practically everywhere but, researchers have found, are especially concentrated in mucus. Human saliva harbors about five bacteriophages for every bacterium, for instance, but mucus on the gums hosts eight times that many. Bacteriophages may attack beneficial or pathogenic bacteria, but we can reasonably regard any that attack pathogens as friendly. 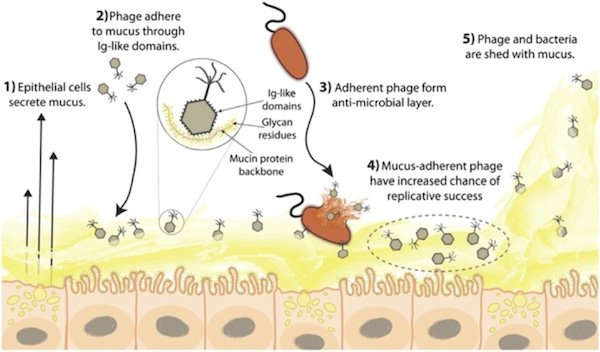 The newly discovered “bacteriophage adherence to mucus” model is likely a ubiquitous form of immunity found wherever cells make mucus. Bacteria-attacking viruses (bacteriophages) have antibody-like (“Ig-like”) parts that adhere to the glycan sugars present in mucus. For this reason, the phage population in mucus is much higher than in other places. These phages can attack and destroy bacteria trapped in the mucus. Image by Jeremy J. Barr et al., via PNAS.2

Observing the dramatically higher phage population in mucus—whether collected from humans, sea anemones, mice, coral, or fish—Barr wondered, “What are these phages doing? Are they protecting the host?” At first the microbiologists explored the possibility that mucus just traps lots of bacteria and keeps the phages constantly supplied with good meals. But then they found that phages heavily populate bacteria-free mucus too.

Additional experiments showed that phage-containing mucus could protect cells—lung cells in a tissue culture, in this case—from harmful bacteria. Without phages, lung cells that made mucus were as defenseless as mutant lung cells that didn’t. But lung cells with mucus inhabited by E.coli-attacking phages survived the bacterial onslaught.

While this showed that phages in mucus could be very helpful, given that phages persisted in mucus even without bacteria around, the question remained: why do the phage populations in mucus grow so large? The answer, it turns out, is in the biochemistry. 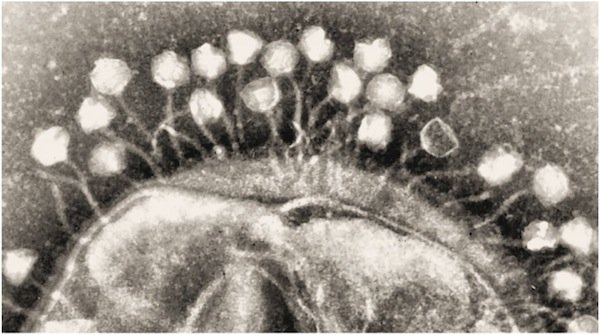 In this electron micrograph, many bacteriophages are attacking this bacterium. Image by Webridge, via Wikimedia Commons.

Mucus consists mostly of large complex molecules called mucins. Each mucin molecule, like a big “biological bottlebrush,”3 consists of a long protein backbone with thousands of glycan sugars attached. There are many different kinds of glycan sugars. But phages are studded with a wide variety of antibody-like molecules able to grab onto these glycans.

Do the phages in mucus also target “good” bacteria? Could host humans and animals adaptively manipulate this ubiquitous immune system by bearing in their mucus glycans recognized by the phages that target the most pathogenic bacteria? It is too early to tell. Further research will address these questions. Additional research in diseases associated with abnormal populations of bacterial flora, such as inflammatory bowel disease, may reveal why people get sick. Therapeutic options could eventually result if medical scientists can determine how to tailor the phage population in a patient’s mucus to target pathogenic bacteria or to insert helpful genetic material into the genome of beneficial bacteria.

While much research remains to be done, this discovery, Barr says, “forces us to reevaluate the role of phages. Hopefully this will get people thinking about what they do and how we can use them to help us and combat disease. . . . It's a novel immune system that we think is applicable to all mucosal surfaces, and it's one of the first examples of a direct symbiosis between phages and an animal host.” 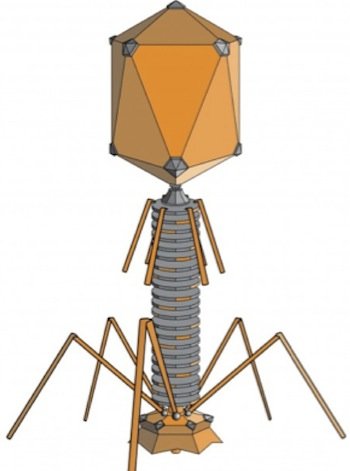 This model of a bacteriophage virus houses its RNA or DNA in the geometric-appearing protein capsid at the top until it is able to inject it into a bacterium. Image by Adenosine, via Wikimedia Commons. 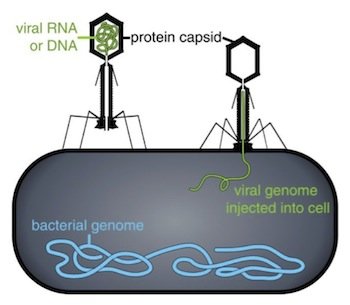 Bacteriophage viruses are infecting a bacterium. The viral genome will be replicated inside the bacterium, eventually killing it. However, in some cases, genetic material from the virus may be incorporated into the bacterial genome. Bacteria so infected remain bacteria but may acquire new characteristics from the addition of genetic material. Image by Splette, Adenosine, and Thomas Splettstoesser, via Wikimedia Commons.

“One of the most exciting aspects about this symbiotic relationship is that it likely acts at all mucus surfaces, and has been evolving ever since mucus was first produced,”4 Barr says. He writes, “Phage are ingenious. They have evolved, traded, and disseminated biological solutions to almost every biological problem, whether we are aware of it or not.”5 Barr and colleagues write, “The bacteriophage adherence to mucus . . . model suggests that metazoan mucosal surfaces and phage coevolve to maintain phage adherence. This benefits the metazoan host by limiting mucosal bacteria, and benefits the phage through more frequent interactions with bacterial hosts.”6

This is a marvelous piece of research, revealing a useful role for certain viruses. It likewise holds much promise for the discovery of future practical medical, biological, and ecological applications. But the observations made in the San Diego lab tell us nothing about evolution or the origin of phages and mucus through coevolution. Phages remain phages. Bacteria remain bacteria. And mucus remains mucus. Natural selection and other ordinary genetic processes are in play here, leading to the development of adaptations and symbiotic relationships between phages and host humans and animals. These adaptations will likely be found to involve dynamic and even rapidly changing relationships, for mucus-producing cells are normally sloughed and replaced rapidly, making possible rapid alteration in the glycan moieties on the mucin molecules, opening the potential for selective advantages to be manifest. But nothing about the findings suggests that anything is acquiring the genetic information to evolve into something new and more complex.

The antibody-like proteins in the phage protein coats would not be able to recognize the glycans in the mucus if it weren’t for the occurrence of many of the same biochemicals throughout the natural world. Thus, this finding is a great example illustrating the importance of the common designs our common Designer, God, created even at the biochemical level. But nothing about the discovery demonstrates either molecules-to-man evolution or supports the relevance of evolution to medical science.

God created bacteria and viruses and all living things. Scripture records that He created the world in just six days, leaving no room for evolutionary claims. Mucus and phages have likely been protecting humans and animals since sin’s curse entered the world and doubtless had beneficial natural roles from the beginning. We can only speculate about the way beneficial phages functioned in the original “very good” world. But these beneficial viruses, like beneficial bacteria, are a reminder that the world God created was a very good world in which even viruses would have had a useful role.