You know you have a blood type, but you may not realize you have a “bug type.”1 Back in 2011 scientists discovered that human gut flora—the “good” bacteria that live inside you aiding your digestion, bolstering your immune system, and manufacturing biomolecules you need—come in three different enterotypes. An enterotype is a combination of microbes that tend to be found together in the intestines. “Microbes inhabiting the human gastrointestinal tract tend to adopt one of three characteristic community structures, called ‘enterotypes’, each of which is overrepresented by a distinct set of bacterial genera.”2 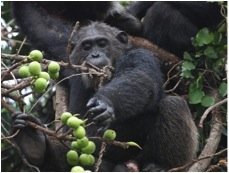 A bacterial census on samples collected from chimpanzees living in the Gombe Stream National Park in Tanzania from 2000 until 2008 revealed that chimpanzees, like humans, can be grouped according to the predominant types of bacteria in their intestines. Members of known chimpanzee families were compared to each other, but no pattern emerged. Individuals’ enterotypes varied over time, but research has yet to reveal a correlation with diet or any other factors in the chimpanzees. Image by Ian Gilb, via USA Today.3

Researchers from the Yale Microbial Diversity Institute have discovered that chimpanzees harbor the same sorts of enterotypes as humans. They observed that “chimpanzee enterotypes are compositionally analogous to those of humans.”4 But they interpret their observations as evidence for evolution, writing, “These results support the hypothesis that enterotypic variation was present in populations of great apes before the divergence of humans and chimpanzees.”5

This diagram illustrates the analogous enterotypes found in chimpanzees (left) and humans (right). Though the bacterial genus groupings in chimps and humans were similar, the specific species varied greatly, with some that were common in one being rare or non-existent in the other. The researchers do not claim that the enterotypes have been unchanged over evolutionary time. They do believe, however, that the occurrence of three analogous enterotypes in chimps and humans suggests that microbial evolution millions of years ago guided the evolution of the digestive system similarities in apes and humans from a common ancestor. Image by Andrew Moeller et al., via Nature Communications.6

These three graphs show the relative abundance of the genera (genuses) of bacteria in each enterotype. The bacteria of each enterotype tend to be fellow-travelers in that their populations vary in proportion to one another’s. For instance, enterotype 1 (indicated by yellow) is dominated by bacterial species of Bacteroides, Faecalibacterium, and Parabacteroides. This combination of bacteria produces an abundance of the enzymes used to manufacture the vitamin biotin.7 This enterotype 1 combination is found more often in people whose diets are high in animal fats and protein. These bacteria are relatively rare, however, in the microbial ecosystems of enterotypes 2 and 3, which are dominated by their own characteristic bacteria. Image by Andrew Moeller et al., via Nature Communications.8

The fact that the ecosystems (aka microbiomes) in human intestines come in three different varieties was discovered through genetic studies. Samples were collected from a wide variety of people from all over the world. DNA fragments were extracted and the human fragments discarded. The remaining microbial DNA fragments were categorized to discover the identity and proportions of bacteria living in each person.

Three, and only three, distinctive ecosystems were found in human digestive systems. Each of these microbiomes consisted of a prominent group of bacteria. Each microbiome was also most suited to manufacturing a “unique balance” of valuable enzymes and other substances.9 Each person’s “bug type” was independent of geography, ethnicity, health, and age. Even the existence of chronic bowel disease did not correlate with the microbial ecosystem. Long-term diet did correlate, however, with one enterotype being more likely to occur in people who eat high carbohydrate diets, for instance, and another in those who regularly consume lots of animal fats and protein. Thus, a microbiome can be thought of as “a multispecies community, in which each kind of bacteria has its own distinctive metabolic role,” possibly supplementing the diet.

The Yale group’s eight-year study of chimpanzees in Tanzania’s Gombe Stream National Park has discovered that, though specific bacterial species vary, the genera (genuses) of bacteria that tend to be fellow-travelers are the same in chimps as in humans. “Chimpanzees possess enterotypes that are compositionally similar to those observed within human populations,” says lead author Andrew Moeller.10 Enterotypes of individual chimps typically changed over the course of the eight years but without any pattern. And the chimp enterotypes showed no patterns within families, by age, or according to seasonal variations in the available diet.

The fact that three analogous types occur in humans and chimps is being interpreted as evidence that ancient gut flora shaped the course of human evolution.

While the researchers do not claim that the microbial ecosystems have remained stable for millions of years, the fact that three analogous types occur in humans and chimps is being interpreted as evidence that ancient gut flora shaped the course of human evolution. “This shared [human and chimpanzee] organization of the gut microbial community is millions of years old and the findings attest to their functional importance,” explained Howard Ochman, director of the Microbial Diversity Institute. “Now that we know enterotypes have been maintained over evolutionary timescales, our goal is to determine their functions and how they might be important to the health of their hosts.”

Further research to discover the causes, consequences, and advantages of the various microbiomes is certainly needed. As that information is discovered, the Yale team’s findings could well lead to helpful medical applications. But the discovery has nothing to do with evolution and does not support the notion that humans and chimps share a common ancestor. Chimps and humans, created to live in the same world, benefit from similar combinations of helpful bacteria. Each enterotype is an ecosystem that promotes production of certain vitamins. It is not surprising therefore to find that each enterotype is best suited for symbiotic relationships with humans that eat certain types of diets. Potential medical applications depend upon testable observations and experimental science in the present, not evolutionary insights.

The Yale Microbial Diversity Institute was established to discover more about microbial diversity because “Microbes govern processes ranging from biogeochemical cycles to the health of individual humans, animals, and plants.”11 This fact is a reminder that the majority of microbes are actually helpful, not harmful. And furthermore, God created a perfect world in which microbes without a doubt fulfilled their proper roles in their proper niches, helping the environment and all the living things God created. Only after sin’s curse entered our world did the ordinary processes by which microbes vary lead some to become harmful. Hopefully these discoveries will eventually be useful to medical professionals dealing with the challenges that occur in the present world.