“Why Are You so Bothered?”

by Bodie Hodge on May 5, 2006
Share:
Email Using:
Gmail Yahoo! Outlook Other

If we are creationists, does that mean we lack faith?

I thought the point of worship was to have faith in God. If you have faith, then proof and evidence is unnecessary. There are many things I find wrong with Creation science, but the lack of faith is the worst. How can you represent yourselves as men and women of faith and at the same time spend your life trying to prove the existence of God and God’s will? Why do you turn your back on science when it can be such a benefit to mankind? The theory of evolution does not attack religion, and people that truly embody faith in God are not bothered by such theories. Why are you so bothered?

I thought the point of worship was to have faith in God.

Worshipping and having faith are two different concepts in the Bible (although having faith in God is certainly a necessary aspect of worshipping God, Hebrews 11:6). I suggest searching the Bible for both words and doing a study on them individually. This will give you a better grasp of the two. Both are important, and faith is sometimes overlooked.

If you have faith, then proof and evidence is unnecessary.

On one hand, I agree. Faith requires neither evidence nor proof (Hebrews 11:1), but it provides the foundation that one should use to look at evidence or proof. One must have faith in his axioms (e.g., that God exists and that the Bible is His Word, more on that below).

On the other hand, I see a proper interpretation of evidence as a supplement to faith-building, or what I would call a “faith strengthener.” So it plays a significant role in the life of a believer. Take for example the following fish fossil: 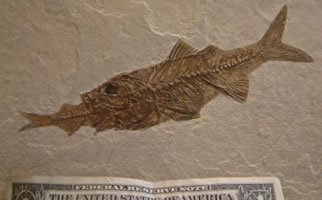 This fish was buried so quickly that it didn’t have time to finish its dinner before mineral rich sediment covered it, eventually causing it to fossilize. The “fish-eating-fish” evidence strongly indicates that is was rapidly buried in sediment; hence, it is a good confirmation of the kind of fossilization that we would expect from Noah’s Flood as recorded in Genesis 6–8. This fossil doesn’t prove that the Flood of Noah’s day happened, but it is consistent with what we would expect to find as a result of such a Flood. Therefore, this can be used to help strengthen the faith one already has in the Bible’s accuracy, and, in association, strengthen one’s faith in God.

There are many things I find wrong with Creation science, but the lack of faith is the worst.

Sadly, I also see some in the creation movement that lack faith. This should remind us to live the faith, and not just speak about evidence and creation. Our faith should not waver because of evidence that may seem to contradict what we believe. We should seek a proper interpretation of the evidence which, then, confirms our faith.

I was recently speaking at a Christian school and one of the teachers said that sometimes he thought that the students perceived evidence for creation as proof of the Bible and the existence of God and that this neglects faith. I pointed out how evidence is a good confirmation, but should never be a replacement for faith. He was happy that I responded that way; we had come to the same conclusion about evidence and its relationship to faith by using the Bible as our guide. This verse in Hebrews sums it up:

But without faith it is impossible to please Him, for he who comes to God must believe that He exists, and that He is a rewarder of those who diligently seek Him. (Hebrews 11:6)

How can you represent yourselves as men and women of faith and at the same time spend your life trying to prove the existence of God and God’s will?

We don’t spend our lives trying to prove the existence of God and God’s will. We’ve been open about our beliefs as a presuppositional ministry. We take as our presupposition (axiom) that God exists and that God’s Word is the truth.

Hi, I’m 19 years old and I just wanted to say how I love your ministry and your website, which is easy and appealing to use. Because of this ministry, I was delivered from doubting my faith When I was in 7th grade. The teacher put in a tape about evolution which desroyed my views on life. Since the people on the tape shown what they call proof, which now I know is no proof at all, I thought it was true.Well after reading your books,I went all the way through middle and high school with a firm assurance of my faith, which is the one and only true faith. I want to personally thank Ken Ham, Buddy Davis, and all the staff of A.I.G.

Remember, God hasn’t tried to prove His existence. Since God is our perfect example, we also don’t try to prove God’s existence. We believe that He exists by faith. Though many arguments, like design and information theory, point to God and are consistent with what we would expect to find since God exists, they are not proofs per se.

As I said earlier, our faith in God and what He teaches in His Word provides the foundation for looking at and explaining the evidence. We use the Bible as our “manual” to help us understand what we observe in the world around us. This is why we stress the importance of understanding the Seven C’s of History—this framework helps us to look at the world from the perspective God has given us.

Why do you turn your back on science when it can be such a benefit to mankind?

When have we turned our back on science? We value science and have many PhD scientists that work with us who value and use science to explore the (now-cursed) world God created.

No, we don’t reject science; however, we do reject most evolutionary interpretations of scientific findings.

The theory of evolution does not attack religion,

So how do you reconcile evolution (goo-to-you) with a plain reading of Genesis? One is correct and one is not—they are not complementary. If you have faith in God, as you seem to indicate, then do you have faith that God will never be wrong, including in the eyewitnesses account of His Creation which He inspired men to record? Please see our section on theistic evolution.

and people that truly embody faith in God are not bothered by such theories.

So when others say God was wrong in Genesis, Mark 10:6, Matthew 19:4, etc., do you just accept what they say as accurate without question? This shows a lack of faith in God’s Word and actually belittles God. I want to encourage you to trust God from the first verse. Place your faith in what God says, not what man says.

What if someone told you that “science” has shown that Christ didn’t rise from the grave? Would you accept man’s ideas about this and claim that if you have faith, you don’t have to believe Jesus rose from the dead? This presents theological problems as well.

And God both raised up the Lord and will also raise us up by His power. (1 Corinthians 6:14)

Why are you so bothered?

I sincerely believe that faith in God’s Word honors God—the Author of the Bible. After all, Jesus Christ is the living Word and the Word made flesh. Honoring the written Word should be stressed in a like manner. I suggest you take some time to read A Young Earth—It’s Not the Issue!.

Previous Article Why is the Genesis Creation Account Authoritative and Not Just Another Myth? Next Article Refuting Alleged Shortcomings, Part 1