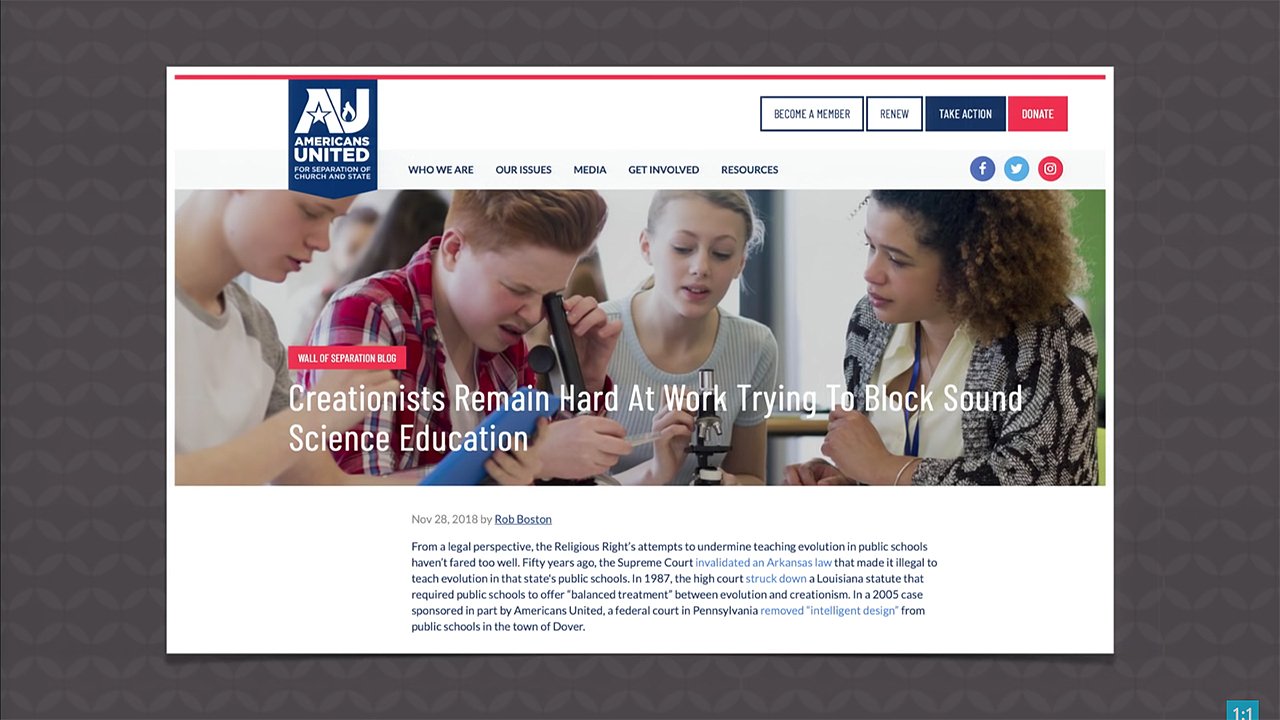 A blog appeared recently on the website for Americans United for Separation of Church and State titled, “Creationists Remain Hard at Work Trying to Block Sound Science Education.” It laments the tide of public opinion against evolution in the US and the way this influences how teachers present evolutionary ideas in the classroom. But I think headline should read instead, “AU Works Hard to Stop Every Student from Being Taught the Truth Regarding Evolution.”

AU is really a group (just like the FFRF) that bullies those who don’t agree with them, trying to impose their anti-God religion of evolution on all students. They want every child to believe they're just animals and that life is ultimately meaningless (the logical outcome of an evolutionary, atheistic worldview). I thought I would address several of the misleading themes and statements made throughout the article.

First, we need to challenge their claim that creationists don’t want students taught evolution. As we’ve said before, we don’t fight the idea of children learning about evolution (and we don’t even insist creation must be taught in school!)—but we want them to learn about evolution, warts and all. Sadly, the massive problems with evolution are rarely presented. Instead it’s taught as fact in most classrooms throughout the nation.

Here are just two of the many problems with evolutionary ideas:

And the truth is that, by far, the majority of teachers present evolution as fact to their public school students. Science textbooks used in these schools promote evolution as fact. Most teachers who reject evolution are afraid to even mention any of this, as they’re fearful they’ll be fired because of bullies like AU, FFRF, etc. AU is fearful that even one teacher somewhere might teach kids the truth about evolution—that it’s a belief not confirmed by observational science.

The author quotes from a Los Angeles Times column that says,

No credible scientist doubts that evolution is the theoretical and practical core of biology, with more evidence emerging from a rich array of research fields with every passing year.

This is blatantly untrue. Many creation scientists very much doubt such a statement. But evolutionists just wave this away by saying they must not be credible scientists even though they graduated with PhDs (many from secular schools) and have done (and published) research. But they aren’t credible merely because they don’t agree with evolution. (Such thinking is known as the “No True Scotsman” logical fallacy.)

Students won’t fail to grow up to be scientists because they lacked evolutionary education, as the blog claims.

My challenge to AU (as I gave to Bill Nye “the Science Guy”): name one technological achievement that requires belief in naturalistic evolution. There's none! Students won’t fail to grow up to be scientists because they lacked evolutionary education, as the blog claims. Many of the greatest scientists of the past—including the likes of Sir Isaac Newton—were creationists and studied creation because of their love for and knowledge of God and his Word.

Ultimately, the AU blog vilifies creationists because of a lack of a true understanding of the real issue. It’s not a battle of science vs. religion, or science vs. the Bible. The real issue is on a worldview level: whose authority will you trust? Man’s or God’s? Which foundation you choose determines how you interpret the evidence. The issue is a worldview battle!

Watch the entire episode of Answers News for December 10, 2018.