The Ghost of Darwin

On February 12, 1809, in the modest town of Shrewsbury, England, Susannah Darwin gave birth to her now-famous son Charles in their family home called The Mount. 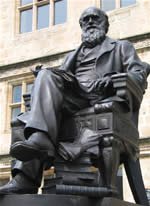 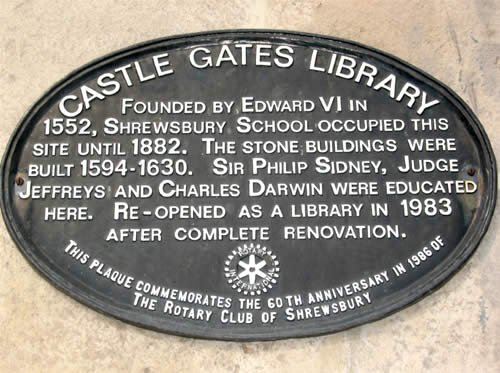 Darwin’s ghost is felt all around Shrewsbury, England. This statue of Darwin (top) graces the entrance to the building where Darwin was educated—and of course there is a special plaque (bottom) to inform visitors about this fact.

On February 12, 1809, in the modest town of Shrewsbury, England, Susannah Darwin gave birth to her now-famous son Charles in their family home called The Mount.

Darwin’s Presence Where He Was Born

That was roughly 200 years ago, yet as you walk through the town of Shrewsbury, you sense Darwin’s influence (his “ghost”) all around. Darwin Street, Darwin Terrace, Darwin House, Darwin Gardens, and the Darwin Shopping Center are just a few of the landmarks that honor and immortalize this man.

“I don’t believe in ghosts! But the ghost of Darwin is a very real phenomenon nonetheless.”

Before patrons enter the town library, they are greeted by a statue of an older Darwin and a plaque, which informs them that this is the very building where Darwin received his education.

As area students enter their modern school, they see a prominent statue of a young Darwin, with sculptures of various animals he saw on the Galápagos Islands, which he used to support his idea of natural selection.

Darwin’s ghost also inhabits the classrooms of this school. There students are taught that Darwinian evolution is indisputable fact—the same fact that is taught in secular schools around the world.

Shrewsbury is also gearing up for major celebrations in 2009, the 200th anniversary of Darwin’s birth and the 150th anniversary of the publication of his famous work On the Origin of Species by Means of Natural Selection, or the Preservation of Favoured Races in the Struggle for Life. However, town officials are not just gearing up for 2009. With the prospect of ongoing financial development through the promotion of Darwin’s roots in Shrewsbury, they commissioned a 90-page, 30-year strategic plan centered on celebrating and commercializing Darwin. His ghost will become even better known and celebrated (not just in Shrewsbury, but around the world) and will be the focus for tourists visiting the area. 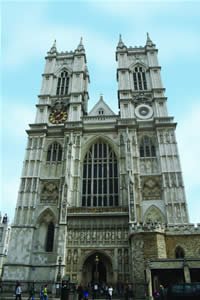 Darwin’s Presence in the Church

The really sad aspect of all this is that Darwin’s ghost has invaded the church. Hundreds of thousands of churches around the world have adopted Darwinian evolution and reinterpreted the history in Genesis to fit with Darwin’s anti-Christian beliefs. Theistic evolution (the belief that God used evolution) has become a dominant position in much of the church in England and has spread from there around the world.

In 2006, hundreds of churches in the USA signed up to celebrate what they called Evolution Sunday to honor Darwin on the anniversary of his 197th birthday. The clergy of these churches took this time to teach that evolution and the Bible are compatible. Evolution Sunday promoted the compromised views of churches that reject the clear, literal interpretation of Genesis and, instead, add in the evolutionary ideas of an unbeliever.

The Result of Darwin’s Presence

As a result of such compromise, which began in a big way in the Church of England during the nineteenth century, subsequent generations in the church began rejecting more of the authority of Scripture. Observers note that whereas England’s church attendance before World War II was 40–50 percent, by 2003 “only 7.5 percent of the population went to church on Sundays and that, in the past 10 years—billed by the churches as the ‘Decade of Evangelism’—church attendance dropped by an alarming 22 percent.”1

The ghost of Darwin is felt as one travels across England and sees church buildings that have been turned into shops, mosques, nightclubs, and worse. 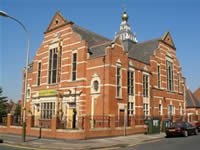 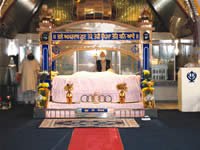 Darwin’s influence is seen across England, as churches have been turned into shops, nightclubs, mosques and other pagan temples. This once-Protestant chapel is now a Sikh temple (top), a religion formed in India nearly 500 years ago. Where the Bible was once proclaimed now sits a throne (bottom) for the Guru Granth Sahib, their holy book.

England’s education system and culture, as a whole, were once primarily built on the foundation of God’s Word. The United States was also solidly founded on God’s Word. However, Christians in England, America, and many other nations have allowed that once-solid foundation to be replaced by the shaky foundation of man’s word, particularly Darwin’s evolutionary ideas and the belief in millions of years.

Darwinian thinking is seen in the pages of public school textbooks and in the humanistic mindset of the next generation. His ghost is present in empty church pews, in secular science, in revisionist history, in the hallowed halls of art museums, and in the signs, movies, and brochures at zoos and national parks worldwide. Christian morality has all but collapsed in Western society. The culture has been secularized, and young adults who were brought up in church, but with a naturalistic foundation, are turning away from Christianity. These are a few results of the evolutionary thinking and compromised doctrines that permeate even the church today.

Christians should pray that the Lord rebuilds the foundations of His house that shifted from the firm ground of His Word and compromised because of the works of a man.

Such rebuilding must start with the literal history of Genesis 1–11—a return to the authority of the Bible. Christians must rally together to stop Darwin’s ghost from destroying the culture.

Darwin’s family home in Kent, England, now a museum, is where Darwin wrote his two most famous works.

In 1859, from his home near the small village of Downe in England, Charles Darwin wrote The Origin of Species. This book popularized the idea that life could be explained by natural processes, without God. A few years later Darwin published the book Descent of Man, applying his evolutionary ideas to the origin of man and postulating that mankind evolved from ape-like ancestors.

From this house spread a philosophy that attacked the authority of God’s Word in Genesis—the foundational history for all Christian doctrine (including the gospel), and, in fact, for the entire Bible.

This fact is clearly illustrated by a quote in the home’s final exhibit, which is mounted on top of the silhouetted text of Genesis 1. It reads:

Many Christians believed that the world and everything in it, including mankind, had been created by God in the beginning and had remained unaltered ever since … . Darwin’s theory made nonsense of all of this. He said that the world was a constantly changing place and that all living creatures were changing too. Far from being created in God’s own image, Darwin suggested that human life had probably started out as something far more primitive—the story of Adam and Eve was a myth [emphasis added].

The quote above sums up the legacy of Darwin. His ghost has spread around the world, and it is totally consistent with what Darwin himself wrote in his autobiography:

I had gradually come, by this time, to see that the Old Testament from its manifestly false history of the world, with the Tower of Babel, the rainbow as a sign, etc., etc., from its attributing to God the feelings of a revengeful tyrant, was no more to be trusted than the sacred books of the Hindoos, or the beliefs of any barbarian.2