Athabasca Glacier, Canadian Rockies, was near the sign in 1890. It has since melted back to its current location due to global warming.

Many articles and books have been written in recent years on the subject of global warming—much of the information confusing.

Some contain much hysteria, like the special report in the April 3, 2006, issue of Time and an article in a recent National Geographic.1,2 Practically all the articles in these issues blame people and emphasize the potentially harmful effects of global warming. Even Hollywood, through the movie The Day After Tomorrow and others, aggressively promotes the idea of a coming, rapid ice age caused by global warming.3 Eighty-six prominent Christian leaders recently jumped on the bandwagon with the Evangelical Climate Initiative (ECI).4

But how is this information to be evaluated? We should first check the data. As with the creation/evolution issue, we need to separate interpretations from facts. 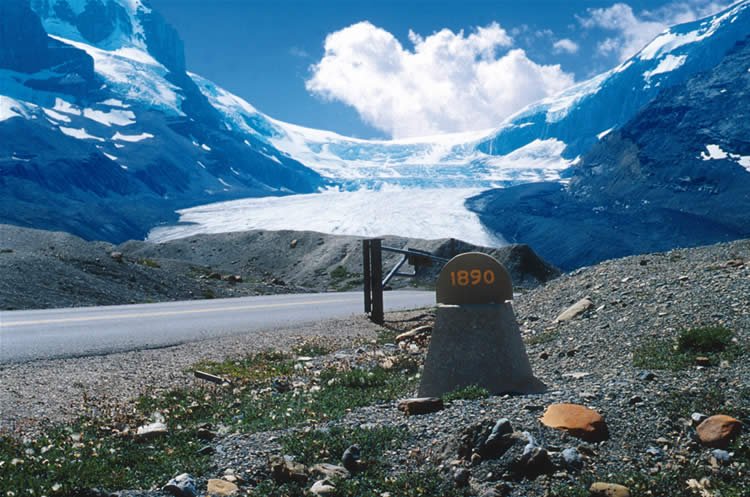 Athabasca Glacier, Canadian Rockies, was near the sign in 1890. It has since melted back to its current location due to global warming. (Click to enlarge.)

Practically all atmospheric scientists (the author included) agree that global warming has occurred. The raging debate is over how much of it is caused by man and whether global warming will be harmful. Patrick Michaels and Robert Balling, climatologists and critics of greenhouse warming hype,5 write, “In the broadest perspective, global warming is a very real thing, undeniable from surface temperature readings taken over much of the planet in the last 100 years.”

The amount of warming since 1880 has been about 1.2°F (0.67°C).6 However, a certain percentage of this warming is likely due to natural fluctuations, especially on the sun.7 From about 1300 to 1880, the Little Ice Age8occurred, in which practically all the glaciers in the world advanced, whereas now they are receding. There was less energy from the sun during the Little Ice Age and more volcanic activity, which helped cool the surface of the earth.9,10 It is possible such natural long-term climatic cycles caused half of the 1.2°F (0.67°C) rise.

Climate specialists run computer simulations using the above-noted formula, in which they double the amount of CO2 and see how much the temperature rises. These simulations are based on estimations and assumptions and not exact figures. The many types of simulations predict a temperature rise of 3 to 10°F. Unfortunately, many politicians and environmentalists take such imperfect climate simulations and claim them to be fact. This is problematic. It is no wonder we have a greenhouse scare. However, if all the greenhouse gases have caused an increase by 60% CO2 in equivalency units, and man has only warmed the atmosphere about 0.6°F, then these climate simulations are much too sensitive to the effects of CO2.

What we really need is more careful research. All positions should have a say on the issue. Unfortunately, the media and proponents of significant technology-induced global warming have demonized many qualified critics and have accused them of conspiring with the oil companies. These are critics who do not feel that a logical case has been made to prove that manmade technologies are at fault.

All of us must study both sides of the global-warming issue (1 Thessalonians 5:21) to better understand what the Lord requires of us. Although God gave us the command to have dominion over the earth, He also instructs us to care for and be good stewards of it.

Could Global Warming Cause Another Ice Age?

Some climate scientists believe that global warming will slow or stop the northward oceanic heat flow in the Atlantic Ocean, causing an ice age. Northern Europe is significantly warmer due to this ocean heat. The stopping of this flow was the basis for the Hollywood movie The Day After Tomorrow.

A new oceanic study, based on measurements over 47 years, claims that the northward heat transport has already decreased by 30%.1 Computer climate simulations suggested that such a decrease would require a global temperature increase of 7–11°F (4–6°C) after nearly a century.2 Some scientists believe that global warming will cause a more rapid climate change and that we need to act now.

So far, the reduced heat flow has caused no climatic effect in Europe. Moreover, Carl Wunsch of Massachusetts Institute of Technology (MIT) believes the climatic significance of the northward heat transport is greatly overblown and that it is difficult to stop it.3 The MIT professor further writes that there are many unknowns associated with ocean and atmospheric climatic interactions, and that climate simulations have many difficulties. Besides, the prevailing winds drive the ocean currents and are mostly responsible for the northward heat transport. The addition of fresh water on the ocean’s surface will not slow the heat flow, which is an unsupported assumption made in climate simulations.

Previous Article The Ghost of Darwin Next Article Exploding Fish