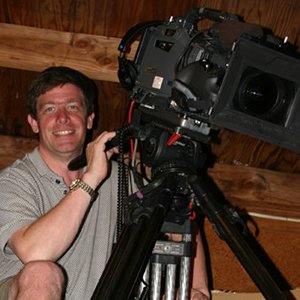 Kyle Justice is the Emmy nominated producer of many creation science DVDs and programs. He is the father of eight children, the oldest being Noah Justice. Kyle has been married for over twenty-five years to Dawn Justice. Kyle and Dawn homeschool, incorporating most of the kids into the travel, shooting, and marketing of their DVD titles. As they travel in their 27’ motorhome, the kids learn about production, photography, science, geography, public speaking, and public relations. Their brand of creation videos is under the label of Awesome Science Media. Many of their video titles are used for science education in the church, Christian schools, and home school programs.

As a teenager, Kyle Justice began producing television projects in the mid 1980s. He and his twin brother were inspired by their father’s hobby of filmmaking. During his high school years, Kyle heard a presentation on evidence for Creation and the Bible from Dr. Donald Chittick and dreamed one day of producing documentaries on the same subject. Through the 1990s Kyle worked for Moody Bible Institute, The Family Channel, and Regent University. In 1997, together with the newly formed Answers in Genesis ministry, Kyle produced his first creation science DVD project, The X-Nilo Show. In 1999 Kyle became an independent television producer, creating content for major networks such as ESPN, National Geographic, the Outdoor Channel, Fox Sports, and Comcast SportsNet. Kyle continued producing creation science programming by developing “The Creation Network,” a weekly program airing nationally on Sky Angel during 2000–2001. 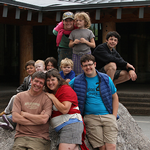 In 2010 the Justice family took a 25-day road trip across the western United States, visiting several national parks. Kyle took his production gear and shot footage of the parks, as well as Noah in front of the camera talking about various geologic formations from a Biblical worldview. After coming back, they developed the first four episodes of Awesome Science and obtained Master Books as a distributor. During this time Kyle also began working with Dr. Steve Austin and Michael Oard to produce a series of DVDs on Flood geology, including the topics of Mount St. Helens, the Ice Age, and the Missoula Flood. Based on the success of these DVDs, the family began producing additional episodes of Awesome Science, The Heavens Declare series, the Creeping Things series, and the Debunking Evolution DVD. They have many more titles in development and post-production including topics on animals, dinosaurs, and applied science. Some of these projects may include Noah’s other siblings as hosts.

The Justice family is adventurous and dedicated to serving God in the area of media ministry, with a focus on science and the Bible. Their programs are now available around the world on DVD, broadcast networks, and the Internet. They currently live in the Pacific Northwest, but look forward to more adventures of how God will use them around the world.