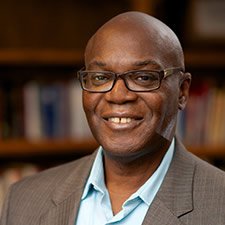 Dr. A. Charles Ware (DD) is Executive Director of Grace Relations and Special Assistant to the President of The College of Biblical Studies. CBS has campuses in Houston, Indianapolis and Fort Wayne, Indiana. He earned his B.R.E from Baptist Bible College and M.Div. from Capital Bible Seminary and received an honorary doctorate from Baptist Bible Seminary. Dr. Ware is on the board for ABWE (Association of Baptists for World Evangelism), ABHE (Association for Biblical Higher Education), Anchorsaway, and on the advisory board of the Biblical Counseling Coalition. Dr. Ware has authored, coauthored, contributed to, and edited several books. Among these is One Race, One Blood (previously published under the title Darwin’s Plantation: Evolution’s Racist Roots (Master Books, revised and updated 2019), coauthored with Answers in Genesis founder and CEO Ken Ham. As of 2017, Dr. Ware and his wife, Sharon, have celebrated 44 years of marriage. They have six children, four daughters-in-law, one son-in-law, and three grandchildren.