Are inherited fears mere fodder for novels, or is there some basis for them in science?

Can the memory of traumatic experiences be inherited? Can an animal inherit the fears of its parents? While this might be a handy survival tool, it would require environmental influences to be transmitted across generations. Is there any genetic mechanism by which such a Lamarckian type of scenario could occur? Recent studies on mice and fruit flies have revisited this question.

Jean-Baptiste Lamarck, a 19th century French naturalist whose evolutionary ideas influenced Darwin, thought that animals could acquire new characteristics in response to their environments and then pass those traits on to their offspring. See the giraffe illustration and more information below to understand why Lamarck’s ideas do not provide a mechanism for molecules-to-man evolution.

For any acquired traits to be inherited, the genetic information inside an animal’s reproductive cells—its germ cells—would need to be modified. This modification could theoretically take the form of actual alterations in the DNA code itself, but that does not occur—and that is why Lamarckism was officially abandoned. But epigenetic changes—chemical alterations that work like switches to affect the expression of certain genes—do occur. Some of these are heritable across generations. Two new studies seek to answer whether traumatic memories can be passed on via epigenetic changes from parent to offspring.

Since sperm cells—the male’s contribution to inheritance—are generally produced in large numbers with a fairly rapid turnover, these are the germ cells that would most likely be susceptible to some sort of epigenetic modification in response to a fearful association—if such a thing can occur. Therefore, in both recent studies revisiting Lamarckian inheritance, the impact of the male animal’s fears and memories on offspring was tested. 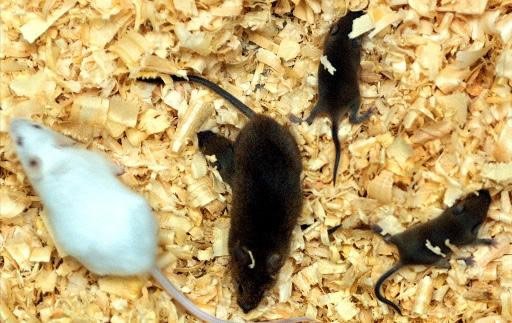 Male mice at Emory University were conditioned to fear the odor of cherry blossoms. In a dramatic demonstration of heritable epigenetic modification, their sons and grandsons displayed an exaggerated sensitivity to that odor and an enhancement in the neurocircuitry used to detect it. Image from Medical Express.1

In a study published in Nature Neuroscience, Brian Dias and Kerry Ressler of Emory University School of Medicine in Atlanta, Georgia, taught laboratory mice to fear the odor of cherry blossoms by shocking their feet. Later, their offspring, which were conceived after aversion to cherry blossoms was well established, were tested to see if they appeared startled by the cherry blossom smell. They were. In fact, they were even more sensitive to the odor than their fathers. The offspring were “able to detect and respond to far less amounts of odour . . . suggesting they are more sensitive” to it, Ressler explains. Other odors did not bother the mice.

Dias and Ressler went the next step—to determine the physical basis for the “memory”—by examining the gene that controls development of the pertinent olfactory receptor in the nose. Olfactory receptors are responsive to particular molecules, so the researchers focused on the neuronal receptor that responds to the chemical used to train the fathers. The DNA of the gene itself was unchanged in the fearful offspring, but the epigenetic switch affecting its expression—in this case, the chemical process of methylation—was altered. 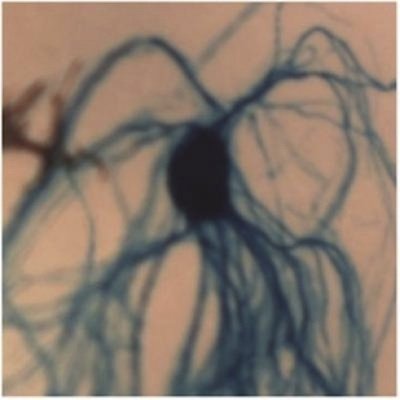 Each odor is produced by a molecule detectable by a specific sort of olfactory receptor. Those receptors are linked by sensory neurons (shown here in blue) to a specific olfactory glomerulus located in the olfactory center of the brain. The sons and grandsons of the mice conditioned to fear the odor of cherry blossoms grew more such neurons and a correspondingly larger olfactory glomerulus in their brains. This presumably is the reason they were exquisitely sensitive to the odor that inspired fear in their fathers. Image by Kerry Ressler, via Medical Express.2

Furthermore, not only was the gene controlling cherry blossom smell detection expressed more in the fearful offspring, the pups’ brains and neurocircuitry were also altered. There were more neurons connecting the implicated olfactory receptor in the nose to the brain. As a result, the corresponding olfactory glomerulus—a nerve center in the brain associated with that smell—was larger in the pups of the fearful fathers.

What about the next generation? The epigenetic changes in the skittish male pups of fearful fathers were indeed passed on to the next generation, the “grandchildren” of the fearful. Inherited “memories” like this could be a valuable way for passing on unique survival instincts for combating the challenges the parents and grandparents had survived. Ressler explains, “Such information transfer would be an efficient way for parents to ‘inform’ their offspring about the importance of specific environmental features that they are likely to encounter in their future environments.”

The researchers are part of Emory’s psychiatry department and hope their research may someday find applications in the treatment of people. “Knowing how ancestral experiences influence descendant generations will allow us to understand more about the development of neuropsychiatric disorders that have a transgenerational basis,” says Dias, possibly leading to a way to diminish the misery of debilitating phobias on patients.

While these data might support the existence of transgenerational fear or phobia transmission, it is too early to extrapolate to humans. It is quite possible, for instance, that the trait being transmitted is a heightened sensitivity to certain stimuli rather than an actual fear or avoidance behavior. In fact, another recent study by Ziv Williams of Massachusetts General Hospital Hospital’s neurosurgery department suggests that very thing.

Williams conditioned fruit flies using electroshocks to make them averse to certain odors and a corn meal/sugar mixture to teach the flies to respond favorably to other odors. Upon testing the offspring, Williams found that they were more sensitive to the odors used to train their parents. However, the offspring were actually attracted to the odors regardless of whether the parents had been conditioned to prefer or avoid them. Williams writes, “These findings suggest that heightened sensitivities to certain salient stimuli in the environment, but not their associated conditioned behaviors, may be transmittable from parents to offspring. Such trans-generational adaptations may influence animal traits over short evolutionary time-scales.”3 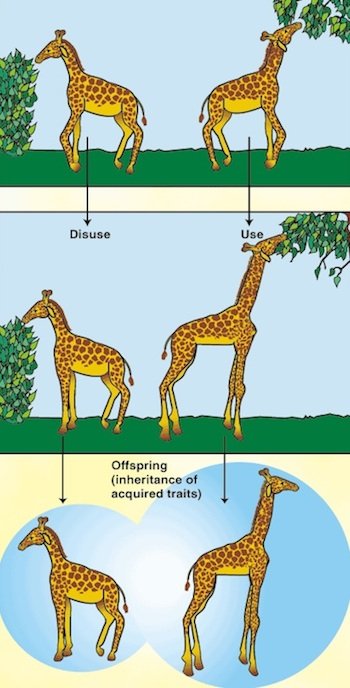 Jean-Baptiste Lamarck thought that animals could acquire new characteristics in response to their environments and then pass those adaptations on to their offspring. One classic example of Lamarckian inheritance is pictured here. By stretching to reach leaves in tall trees, an ancestral giraffe supposedly would grow a longer neck. Then this giraffe, according to Lamarck, would have passed its longer neck on to its offspring, which would be born with longer necks than the parent. The discovery of Mendelian genetics showed that acquired characteristics like this cannot change the genes in an animal’s germ cells. Therefore there is no mechanism for characteristics like stretched necks to add genes to the genome or to be passed on to offspring. Recent discoveries of epigenetic inheritance show how some "acquired traits” seem to be passed on to offspring as genes are switched on or off, but no new genetic information of the type necessary for the evolution of a new kind of animal is revealed. Image from SparkNotes.4

Regardless of whether heritable epigenetic traits only include an increased awareness of certain stimuli, some sort of instinctive avoidance behavior, or—in the case of humans—perhaps an increased vulnerability to certain sorts of problems,5 nothing about this data could be used to support any sort of evolutionary scenario as no new genetic information of the type necessary for molecules-to-man evolution is produced.

Lamarckism, promoted by Jean-Baptiste Lamarck (1744–1829) to provide a mechanism for evolution, was the idea that acquired characteristics could be passed to offspring and drive the evolution of increasing complexity. This would require the production of new genes. The idea that an animal’s experiences could create new genes in its germ cells has long been discredited. Indeed, experiments like this one—showing how epigenetic changes can influence the expression of existing genes—does nothing to reinstate Lamarckian evolutionary philosophy.

Until the recent discovery that some epigenetic influences on gene expression were heritable, no mechanism for inheritance of acquired traits was known. However, epigenetic modifications—whether they affect only somatic cells or get passed on to offspring through germ cells—do not create or destroy existing genes. Epigenetic modifications only affect the expression of existing genes and do not add new genes to an organism. Therefore, epigenetics cannot be a mechanism for molecules-to-man evolution.

God’s Design for Keeping Animal Adaptations in the Family?

Inheritance of “memories” or at least a heightened sensitivity to cues associated with fear, pain, or danger would allow animals to adapt to transient environmental changes without ultimately losing genetic information. The Emory University mouse study demonstrated a mechanism for transmission of a specific ancestral awareness or fear as well as the phenotypic way in which neural and brain anatomy are altered in response to gene expression. The more we learn about heritable epigenetic modifications, the more apparent is the wisdom of our Creator who may well have designed a way for animals to vary and provide adaptations to their offspring while keeping the genomic information itself intact.