Image by NASA, via Wikimedia Commons.

Oh, you haven’t heard of Red Planet Day? To tell you the truth, neither had I until recently. Apparently, a few years ago some people began celebrating November 28 as Red Planet Day. Nothing official, you know.

Why did they pick November 28 as Red Planet Day? It was November 28, 1964, that NASA launched Mariner 4, the first successful space probe to visit the planet Mars. It took more than six months to reach Mars. Mariner 4 was only a flyby mission, meaning that the spacecraft did not enter orbit around Mars but instead kept moving past Mars after closest approach on July 15, 1965. I remember this mission, because that summer I was between fifth and sixth grade, and I had a summer subscription to My Weekly Reader. (Okay, many younger people probably have never heard of My Weekly Reader. For years, it was an educational publication based upon current events and science, and targeted to grade school students. A half century ago, nearly every public school had subscriptions for their students, but the publication no longer exists.) One issue that summer had an article on the Mariner 4 mission. It even included a star chart showing where to spot Mars; it was the first planet that I ever saw in the night sky.

For a long time, people had thought that Mars might be earth-like. With large telescopes on earth, astronomers had seen polar ice caps on Mars, ice caps that grew and shrank with the changing seasons (Mars has an axial tilt of 25 degrees, close to earth’s 23.4-degree tilt). The ice caps suggested that water likely existed on Mars. There were no large bodies of water on the surface of Mars, indicating that Mars was much drier than earth. However, many people thought that there might be sufficient water on Mars to support life.

Many people thought that there might be sufficient water on Mars to support life.

More than a century ago, Percival Lowell extensively studied Mars with a large telescope. He thought that he saw a vast network of canals on Mars, and he suggested that an advanced Martian civilization had constructed these canals to transport melted snow from the artic regions of Mars to the tropics where most of inhabitants of Mars supposedly lived. But I digress. The story of Lowell and Mars is a fascinating one, worthy of further discussion later. Suffice it to say, we now know that there never were any canals on Mars, nor is there any civilization on Mars. 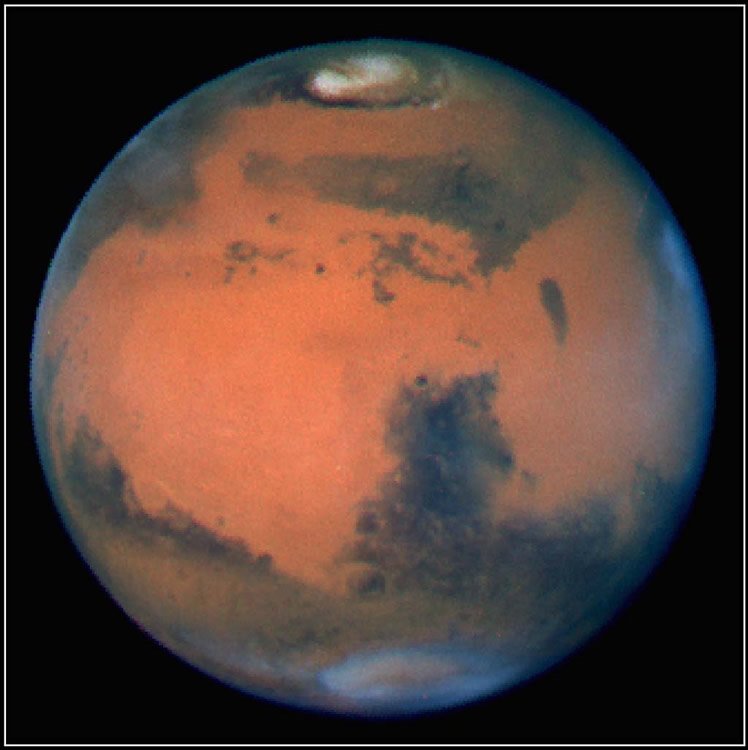 Life, and even liquid water, on Mars would have required a substantial atmosphere. Yet there was evidence that the atmosphere of Mars was modest at best. There also was good evidence, even more than a century ago, that the temperatures on Mars likely were too cold for liquid water to exist on the planet. In retrospect, the images sent back by Mariner 4 as it flew past Mars in 1965 ought not to have been a surprise—but they were. Mariner 4 only took a few photographs of Mars, and those photos encompassed very little— about 1%—of the Martian surface. And by today’s standards, those images were poor. However, those photographs were revolutionary in that they revealed many impact craters on Mars. Overnight, Mars had gone from an earth-like world to a planet that more closely resembled the moon. Astronomers believe that the earth’s atmosphere protects the earth’s surface from many of the smaller impacts that form craters. They also believe that weather helps erase any craters that may have formed on earth. The moon has no atmosphere to shield its surface from impacts, nor does it have weather to remove craters once they form. It appeared that Mars more closely resembled the moon than the earth in this respect, seemingly slamming the door shut to the possibility of life on Mars. 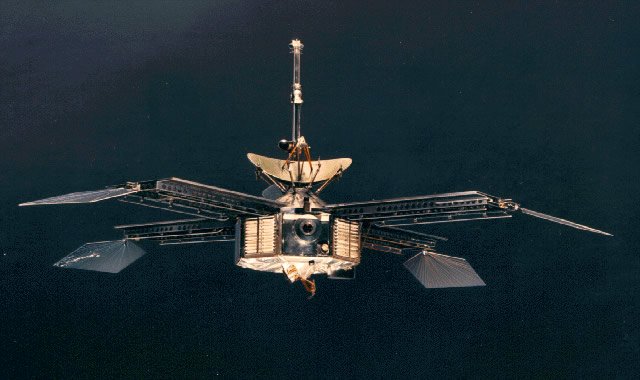 But people can be such optimists, even in the face of evidence that contradicts what they want to believe. In 1969, NASA succeeded in sending two more flyby missions to Mars, Mariners 6 and 7. These missions returned more than 200 photographs, covering about 20% of the Martian surface. And the resolution of the images was much better than those from the Mariner 4. In 1971, the success of these missions was followed by Mariner 9, the first spacecraft to orbit another planet. Over the next year and a half, Mariner 9 returned thousands of images, allowing most of the Martian surface to be mapped for the first time. In 1976, the Viking 1 and Viking 2 missions arrived at Mars. Both missions consisted of an orbiter and a robust lander. While earlier probes had measured some properties of the Martian atmosphere, the Viking landers had weather stations that relayed information for years. Besides the superb cameras orbiting the planet, the cameras on the landers provided stunning images from the surface. Each lander had three experiments to look for evidence of life; all their results were negative.

It would be twenty more years before NASA once again successfully sent spacecraft to Mars with the Mars global surveyor (an orbiter) and the Mars Pathfinder (a lander) in 1996. The latter included the Sojourner rover that operated nearly three months. This was followed by the Mars Odyssey orbiter (2001), the Mars Express orbiter (2003), the Spirit rover (2003), the Opportunity rover (2003), the Mars reconnaissance orbiter (2005), the Phoenix lander (2007), the Curiosity rover (2011), the Mars orbiter mission (2013), and MAVEN (2013). In addition, other countries have sent missions to Mars as well. Many of these missions are ongoing, and future missions are under development. It appears that we will have a continuous presence in orbit around and on the surface of Mars for years to come.

It appears that we will have a continuous presence in orbit around and on the surface of Mars for years to come.

For a long time, justification for exploring Mars included the possibility of finding life there. So what have we learned about Mars with respect to life? The conditions on Mars are extremely hostile to life. The atmospheric pressure is less than 1% of the pressure at sea level on the earth. With so little pressure and being so cold (largely due to its distance from the sun), liquid water cannot exist on Mars. Nor does the thin atmosphere offer any protection from the sun’s harmful radiation. Mars’ weak magnetic field offers little protection from fast-moving charged particles from the sun and other astronomical sources. Consequently, the justifications for exploring Mars no longer include the search for life.

But that just means that the emphasis has shifted. You see, there is abundant evidence that Mars once was much warmer and wetter than it is now. This evidence is river channels carved into the Martian surface and shorelines high on hillsides, indicating that extensive seas once covered much of Mars. To support this much liquid water, the atmosphere of Mars must have been thicker in the past. Realizing that life cannot exist on Mars today, many scientists now think that perhaps life existed on Mars in the past, when conditions were conducive to life. Fossils might offer the best opportunity to find evidence for life that hypothetically might have existed on Mars. That is the major thrust for renewed interest in a manned mission to Mars, something that is now being seriously discussed.

Is a Trip to Mars Worth the Cost?

At its heyday, the Apollo program that took astronauts to the moon accounted for about three percent of the US budget. After we landed on the moon in 1969, interest in continuing trips to the moon waned considerably, and the Apollo program was cancelled after six successful lunar landings. And we haven’t been back in more than four decades. Returning to the moon does not have the sense of wonder that it had a half century ago, especially when one weighs the cost of such a trip. However, many people hope that a Mars mission might recapture the interest in a large-scale, but risky, manned mission like the Apollo program commanded. And what better way to accomplish this than looking for evidence of ancient alien life? How can one argue against that? Well, the cost for one thing. A manned Mars mission would require a two-year mission, costing in the trillions of dollars. It would be extremely difficult to maintain the necessary commitment to such a program over the many years necessary to bring it to fruition.

How likely would it be to find evidence of past life on Mars? Even the most ardent evolutionists think that the probability of success would be minimal.

Creationist Response to the Question of Life on Mars

How do creationists view this possibility? We believe from both the Bible and science that life does not arise spontaneously. Instead, life comes about only through the act of God. Hence the answer to this question is theological. Man is the crown of creation (Psalm 8:3–5), and God has placed man in a position of stewardship (Genesis 2:7–20) and dominion (Genesis 1:28; Psalm 8:6–7). God specially made the earth for man’s habitation (Isaiah 45:18). No other world is revealed as having this special status. Given the centrality of man in God’s attention, it appears that the Bible does not support belief in intelligent life elsewhere in the universe. It also does not appear likely that God would have created even “primitive” life forms on other planets, such as Mars.

God has made us curious creatures, and I think that exploration of all types is part of our having dominion.

Don’t get me wrong—I love Mars, and I think exploration of it is good and can be God-honoring. God has made us curious creatures, and I think that exploration of all types is part of our having dominion. However, I just don’t believe all the hope and hype about possibly finding evidence that life once existed on Mars. Still, we can enjoy Red Planet Day for the exciting world that Mars is, even though there likely never has been any life there.