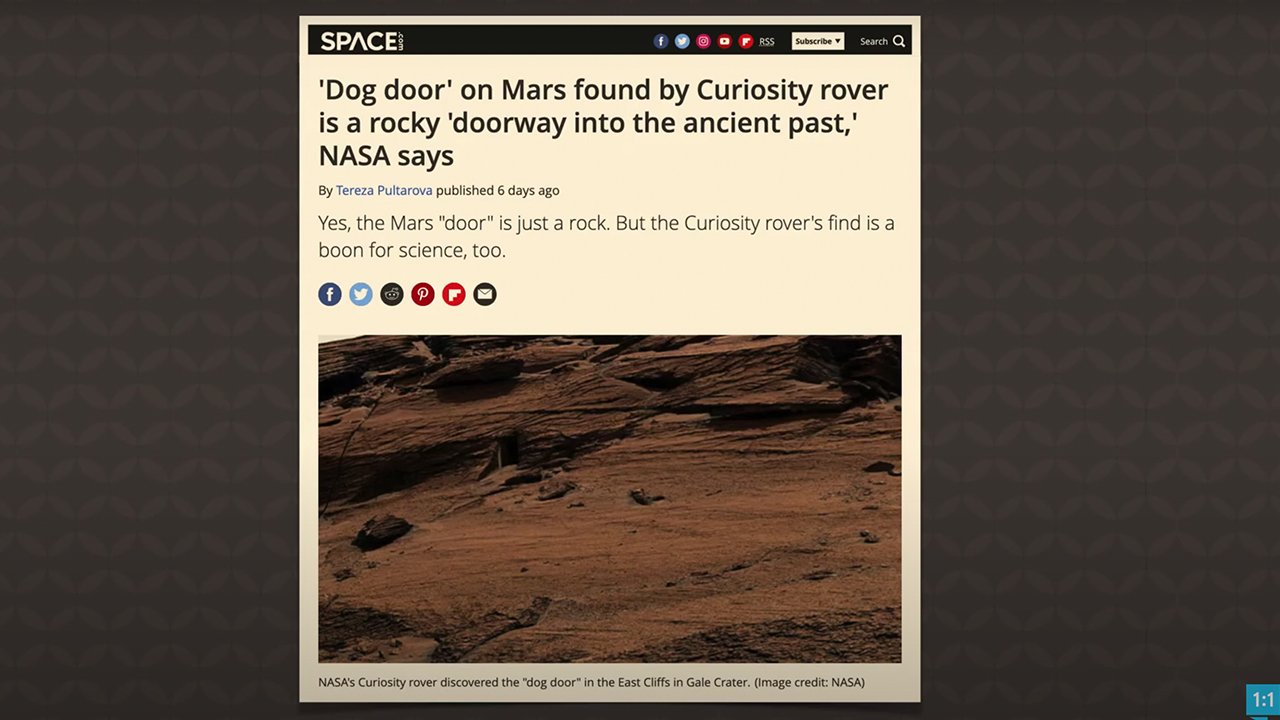 As the rover Curiosity explores our red neighbor Mars, many scientists and space buffs wait with bated breath for news that the planet held (or maybe even holds) life. And the newest find that briefly set the internet ablaze with discussion was a photo NASA released of a “door” in a cliff face on Mars.

The yawning black opening, according to NASA, is a “doorway into the ancient past.” But, rather than being a portal into an alien dwelling, NASA claims the “door”—a diminutive 12- by 16- inch opening—is just a natural “open fracture” in the bedrock. Due to the small size, the NASA team nicknamed the fracture a “dog door.”

It’s interesting that at even the slightest unsubstantiated sign of the possibility that there might, maybe, kind of be (though not really) evidence for some kind of supposed alien life, the internet frenzies—even when that “evidence” turns out to be the brain trying to explain “ambiguous shapes” in terms of known objects (something called pareidolia). And yet the evidence for a Creator God is, to put it mildly, far more obvious than a tiny sloping “doorway” in a cliff on an uninhabited planet. In fact, such evidence is so obvious that God’s Word states those who don’t believe are “without excuse” (Romans 1:20). The structure of the universe, the incredible orderliness (fine tuning) of the cosmos, the language system that is DNA, the complexity of life, the beauty of nature—all of it cries out that there is a God who made everything. Yet this overwhelming evidence is ignored by so many of the same people who will excitedly pore over NASA photos, searching for evidence of extraterrestrials.

This is a great reminder that everyone has put their faith in something. There are those who have placed their faith in Christ and in his eternal Word (and this is not a blind faith—there is overwhelming evidence for a Creator and the truth of his Word), and there are those who blindly put their faith (a faith that lacks credulity) in evolution and the possibility that life evolved somewhere else (something for which there is not a shred of credible evidence). The question is not, “Do you have faith?” The question is, “Where have you placed (or in the majority of instances, misplaced) your faith?”

This item was discussed today on Answers News with cohosts Bryan Osborne, Dr. Gabriela Haynes, and Rob Webb. Answers News is our twice-weekly news program filmed live before a studio audience and broadcast on my Facebook page and the Answers in Genesis Facebook page. We also covered the following topics:

Watch the entire episode of Answers News for June 6, 2022.