Curiosity’s landing inaugurates a new phase in the quest for alien life.

Curiosity has completed its 352-million-mile journey to Mars and successfully landed in Gale Crater. Its seven-minute descent was watched live around the world. Moments after touch down, amidst joyous uproar, someone at the Jet Propulsion Laboratory (JPL) exclaimed, “Time to see where our curiosity will take us!”

Trips into space do stir the curiosity and dreams of many, and for many reasons. The heavens do “declare the glory” (Psalm 19:1) of the God who created them, and we enjoy learning more about the worlds He made from up-close examinations of what’s “out there.” Unmanned missions are necessary preliminaries to future manned possibilities. And a voyage to another planet certainly gives sci-fi fans more “scope for imagination”!1

Igniting enthusiasm for a great American adventure in 1962, President John F. Kennedy said, “We choose to go to the moon in this decade and do the other things, not because they are easy, but because they are hard, because that goal will serve to organize and measure the best of our energies and skills, because that challenge is one that we are willing to accept, one we are unwilling to postpone, and one which we intend to win.”2 And he added, “Space is there, and we’re going to climb it, and the moon and the planets are there, and new hopes for knowledge and peace are there. And, therefore, as we set sail we ask God’s blessing on the most hazardous and dangerous and greatest adventure on which man has ever embarked.”3 Phase one of that adventure reached fruition when the Apollo 11 astronauts left a plaque on the moon saying, “We came in peace for all mankind.”

Though this is the eighth successful landing on Mars, the massive one-ton rover carries the most sophisticated equipment yet deployed on the Red Planet.

But in a new economic era and a new millennium, why is NASA eager to spend so much on Mars? The patriotic race to the moon is over, many other programs suffer from budget cuts, and at a cost of two-and-a-half billion dollars (so far; possibly more if the mission is extended beyond two years). 4 Curiosity had to promise to more than satisfy our curiosity. Though this is the eighth successful landing on Mars, the massive one-ton rover carries the most sophisticated equipment yet deployed on the Red Planet. It required pinpoint engineering accuracy and automation and additional coordination to arrange surveillance from the Mars Reconnaissance Orbiter. That amazing technology and an army of support staff does not come cheap.

Animation showing Curiosity being lowered safely by its rocket crane onto the floor of Gale Crater. The landing of this Mars rover required remarkable engineering, coordination, and automation, owing partly to the fact that the lag in communication created by the distance from earth would have made direct moment-by-moment earth guidance impossible. Landing courtesy of JPL. Image courtesy of www.washingtonpost.com from the video hosted by Marc Kaufman.

Politicians and the public must remain enthusiastic about potential benefits of space exploration in order for such far-reaching scientific endeavors to receive funding. Senator Kay Bailey Hutchison (R-Texas), for instance, connected “NASA’s engineering superiority” to a guarantee of “new discoveries and new applications from all we learn.” To that end, NASA administrator Charles Bolden reminded cheering observers that the cost of Curiosity is equivalent to the cost of a movie ticket for each American, adding “And this is a movie I think people want to see.” (Many numbers are floating around the media, social and otherwise; I’ve personally heard estimates ranging from “half a cent” per person to $7 per taxpayer. But clearly the emphasis is to downplay the staggering sound of $2.5 billion.) As the Washington Post’s Marc Kaufman says in his video at www.washingtonpost.com, “NASA is pulling out all the stops to get people interested and excited in their 2.5 billion dollar mission.”

Why are “we” (virtually speaking, of course) back on Mars? To search for life? After all, the Viking missions in the 1970s found no evidence for life. (See Did Viking Find Life on Mars? for another opinion about that!) The idea of sentient Martians was relegated to science fiction long ago. And the “Martian” meteorite in the 1990s, misinterpreted as showing evidence of fossilized bacteria (yet was used as a club against creationists), didn’t stand up to scientific scrutiny. Of course, Curiosity isn’t technically looking “for life,” but rather for the building blocks of life and chemical evidence of life that might-have-been. So why is Curiosity on Mars? Well, it boils down to water.

Evolutionary scientists are generally convinced that where water was, given habitable conditions, life is likely to have evolved.

Evolutionary scientists are generally convinced that where water was, given habitable conditions, life is likely to have evolved. Some minerals on Mars are suggestive of past exposure to water, and Gale Crater appears to contain an “alluvial fan” consistent with past shaping by water. Therefore, Curiosity is carrying a remote laboratory to examine the rock layers of Mount Sharp for their record of presumed billions of years of Martian history, chemically probing for carbon-based chemicals consistent with prior presence of life. As Mars Program scientist Michael Meyer explains, “The layers provide an opportunity to rove up the surface of Mount Sharp and come through time to see how the environments have changed.” 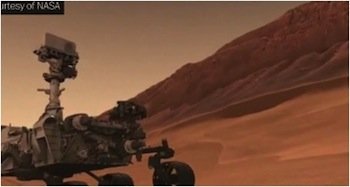 NASA animation showing Curiosity’s planned approach to Mount Sharp where the rover’s laboratory equipment will gather data on the content of the layers. Objective scientific data transmitted back to earth will then require interpretation. Any conclusions about the rock ages will be interpreted in light of assumptions about the age of the solar system. Image from video of the Washington Post’s Marc Kaufman, viewable in its entirety at www.washingtonpost.com

Creationist and evolutionary scientists alike are curious about the history of the moon, Mars, and other landmarks in space. The minerals of which a planet is composed may offer clues to its distant past, but those clues are interpreted in light of pre-existing assumptions about the past—the untestable, unobservable past. While the layers of sedimentary rock in Mount Sharp should provide a clue to the conditions under which they accumulated, those layers aren’t labeled with a timeline tagging their age. Conclusions about Mount Sharp’s timeline are made on the basis of assumptions about the past—assumptions that cannot be verified by science.

A person does not have to be an evolutionist to wonder if there were ever microbes on Mars. The Bible does not say whether God created life on other planets, but the Bible does tell us God created all life on earth during the first six days of Creation week, the same week in which He created the rest of the universe, about 6,000 years ago. Evolutionists generally believe that finding life’s chemical signatures on Mars would confirm life evolved there just as they believe it did on earth. However, no mechanism has ever been observed whereby life could randomly emerge from non-living elements. And if life were ever to be found on Mars, its presence would not prove how it got there. Assuming it was not a contaminant from earth, its existence would just be a testimony to the fact that God could create life any place He chose.

Not even Curiosity’s $2.5 billion dollar price tag can explain life without God.