Cleaner wrasses are some of the most recognizable fish on the reef. They are famous for their fearless cleaning of much larger predatory fish. They are also believed to be crucial to the overall health of a reef biome and to be surprisingly altruistic. What many people may not know is how the cleaning relationship exhibited by the cleaner wrasses demonstrates God’s design, even in the post-fall world.

Cleaner wrasses are one of the most recognizable of reef fish. They have become famous for their cleaning behavior and are much sought after as aquarium fish for this purpose. Some studies have even suggested that cleaner wrasses are smarter than chimpanzees.1 While, until recently, they have not performed well in aquaria and thus have not been recommended,2 their wild behavior provides evidence for God’s marvelous design in his creation.

Cleaner wrasses exhibit symbiotic behavior with numerous creatures on the reef around them. Symbiosis is a long-term relationship between two organisms. There are three types of symbiosis: the one exhibited by cleaner wrasses and their clients is called mutualism. In this type of symbiosis, both the wrasse and its client fish get a benefit to their survival. This is a crucial concept to keep in mind when discussing the cleaner wrasse. 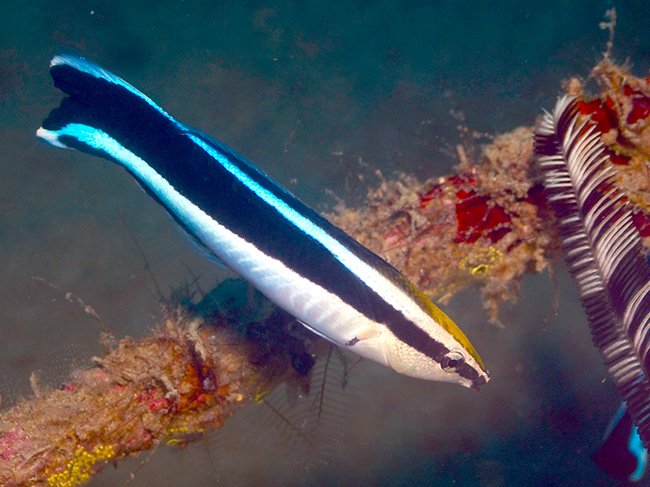 Cleaner wrasses are small fish, generally a few inches long. They have long slender bodies, often with blue and black stripes, though some species exhibit different color patterns. They get their name from their habit of offering their services as a cleaner to other fish species. This is a remarkable behavior. They set up what are called cleaner stations in the reef and advertise their services with a coordinated dance3 to fish species in the reef. Note that some species forgo the cleaning stations, preferring to roam the reef looking for customers.4 These include large predators that would happily eat the much smaller cleaner wrasse. Yet they only rarely are noted to consume the cleaner wrasses, and, when they do, it is away from the cleaner stations.5 This seems to imply that the cleaner wrasses are fair game when they are away from their “office,” but, so long as they are working, they are mostly safe, putting roving species at a higher risk. However, the tradeoff is that roaming the reef enables the wrasses to find clients and initiate cleaning behavior.6

How the tiny cleaner wrasses communicate to the much larger predatory fish that they are not on the menu but are instead offering a service is a very interesting study. Scientists have tested this and found that at least part of it is visual. Using wooden decoys sized and painted to resemble the cleaner wrasse Labroides dimidiatus, researchers found that the more closely the model resembled the cleaner wrasse, the more often would-be clients visited them and the longer they would spend with the imitation.7 While this answers how the client identifies the cleaner wrasse, it does not explain how it knows to seek out the cleaner wrasse in the first place, nor how it knows not to simply gulp down the wrasse as a midday snack after cleaning.

The cleaner wrasse was specifically designed to do exactly what it does. This is exactly what creationists would predict.

Once their client fish reaches their cleaning station, cleaner wrasses begin to clean. They remove parasites and scar tissue from their client fish. Studies have been done showing that, when given a choice, cleaner wrasses prefer the mucus of their client fish to parasites,8 but will “feed selectively against their preference (which corresponds to cooperatively eating client fish ectoparasites).”9 In other words, in order to maintain a steady diet of freely available food, cleaner wrasses will eat food they like slightly less. They will sacrifice an immediate gain for a long-term food supply. The authors of that study concluded that “cleaner wrasse L. dimidiatus are indeed specifically adapted to this problem, because it is very likely to be rare in nature that an animal faces this problem.”10 In other words, it looks like the cleaner wrasse was specifically designed to do exactly what it does. This is exactly what creationists would predict. Evolutionists have no explanation for this kind of forethought, because evolution is a mindless, unthinking, unguided process.

Cleaner wrasses clean their clients very effectively. One species of cleaner wrasse, L. dimidiatus, has been observed to remove an average of 4.8 parasites per minute from its clients.11 Cleaner wrasses have been observed cleaning fish as large as groupers,12 eels, and even stingrays.13 Cleaning can be anywhere from seconds,14 to several minutes.15 The behavior is crucial to the health and variability of the reefs in which the cleaner wrasses live.

There is an abundance of evidence that demonstrates just how crucial cleaner wrasses are to the reef and their fish clients. One study actively removed cleaner wrasses from several small reefs. After eight years, researchers examined the body size of an indicator species of damselfish. They found that the damselfish that were given access to cleaners were larger than those which were not. “This is the first demonstration, to our knowledge, that cleaners affect the growth rate of client individuals; a greater size for a given age should result in increased fecundity at a given time.”16 By removing parasites, cleaner wrasses permit fish to grow larger, and more fertile. However, that is not all. A recent study has demonstrated that cleaner wrasses actually improve the intelligence of the creatures they clean. “[C]leaning organisms can indirectly influence the cognitive abilities of their clients via ectoparasite removal.”17 Removing cleaner wrasses from a reef was demonstrated to be a cause of lower visual learning ability in some fishes, a key component on a reef full of blazing colors and patterns. Based on this, the researchers concluded that cleaner wrasses contribute positively to the intelligence of the fish they clean.

Cleaner wrasses are believed to be very intelligent.

By removing parasites, cleaner wrasses also permit the fish they clean to focus more energy on growing and less on their immune system. This idea is borne out in part by another study from 2010 that looked at the health factors of fish with and without access to cleaners. “In fact, antibody responses were significantly higher in fishes without cleaner access. This suggests that cleaner access decreases the need for active immunity and that this releases resources that might be allocated to other functions such as somatic growth and reproduction.”18 What these researchers are saying is cleaner wrasses permit creatures to get bigger, faster, by reallocating energy from immune responses to growth. Clearly cleaner wrasses are vital to the health of the reef. This points strongly to a forward-thinking designer, which even Richard Dawkins admits evolution is not. “Evolution has no long-term goal. There is no long-distance target, no final perfection to serve as a criterion for selection, although human vanity cherishes the absurd notion that our species is the final goal of evolution.”19

As mentioned in the introduction, cleaner wrasses are believed to be very intelligent. One study provided evidence that cleaner wrasses actually recognize regular clients. “We found that cleaners spent significantly more time near the familiar than the unfamiliar clients.”20 Apparently these tiny wrasses can individually pick out clients they have previously serviced and give them preferential treatment. This is beneficial to the wrasse because it keeps their customers returning, and, therefore, keeps a steady supply of parasitic food available to the wrasse. This mutualistic relationship benefits both cleaners and their clients.

Mutualism, such as exhibited by the cleaner wrasse and its clients, is an incredible problem for evolution.

Mutualism, such as exhibited by the cleaner wrasse and its clients, is an incredible problem for evolution. Dawkins’ “no long-term goal”21 evolution would not predict two creatures, particularly predator and prey, working together for mutual benefit. Evolutionists have attempted to solve this problem in a number of ways. One way that they have attempted to solve the “cleaner wrasse problem” in particular was to deny that the wrasses were actually cleaning their clients. Instead, some studies have postulated that cleaner wrasses are taking more mucus than parasites22 and thus are not providing a true service to the host. One such study reviewing the literature said, “On the basis of these experiments, it is impossible to conclude that ectoparasite removal is an important benefit for clients engaging in cleaning symbiosis.”23 However, this is a spurious argument, made obvious by the benefits to the reef biomes in which cleaners are found24,25 and the benefit to their clients.26 If the removal of parasites were of minimal benefit, it would be expected that removing the cleaners wrasses would have a negligible effect on the reef. Instead studies have found a large negative effect when the wrasses are removed, decreasing the fertility, intelligence, and size of fishes on the reef.

Failing to discredit the cleaner wrasses’ benefit to their environment and their benefit to their clients, evolutionists are left with attempting to explain the existence of mutualism. One study on mutualism opens with the following paragraph:

Mutualisms—mutually beneficial interactions between species—have a long history of being a problem. On the one hand, we see them everywhere, as bees visit flowers, birds eat fruits, legumes form root-nodules and as Herodotus and Aristotle described, tick-birds supposedly pick parasites from the teeth of crocodiles. But on the other hand, scientists have come up with a series of reasons why they should be rare, if they exist at all. Reality and biological theory have repeatedly come into conflict.27

The mutualistic, even friendly association cleaner wrasses share with their clients is powerful evidence that they did not evolve.

That last sentence is very important. In this instance, reality and theory are not the same, yet evolutionists have accepted the theory above the reality. One paper, “The Evolution of Mutualism,” after heavily reviewing the literature and citing dozens of examples of mutualism, says, “Yet understanding how mutualisms of brief exchange survive the attentions of cheaters and parasites may be crucial to understanding how ecosystems became more mutualistic . . . . Similarly, mutualisms must benefit natural ecosystems”(emphasis added).28 The words may and must used here indicate that the author is postulating, not stating fact. The article is over twenty pages long and contains extensive literature review, yet fails to state one concrete mechanism for how mutualism evolved. Evolutionists have no explanation.

The mutualistic, even friendly association cleaner wrasses share with their clients is powerful evidence that they did not evolve. Creationists have no problem explaining their origin. God designed them on day 5. Since they do eat dead skin and excess mucus as well as parasites, cleaning behavior could have been designed from the beginning and merely been adapted after the fall of man in Genesis 3 to include parasites as well. Either way, the cleaner wrasses and their mutualistic relationships with their clients clearly proclaim the glory of God’s design.

Previous Article The Axis of Evil and the Cold Spot—Sear-ious Problems for the Big Bang? Next Article Interspecific Adoption: Can Evolution Explain Altruism in Animals?