by Dr. Elizabeth Mitchell on May 19, 2017
Featured in Answers in Depth
Share:
Email Using:
Gmail Yahoo! Outlook Other

The tiny tropical fangblenny reveals fearsome fangs when it opens its mouth, but an unusual venom is the real key to its defense—and to the defense of its look-alikes.

Picture yourself as a large predatory fish in search of your next meal. You spot a school of colorful fangblennies, each only a couple of inches long. But something about the way they move and the way they look puts you off, so you swim away to find something else for lunch.

What discouraged you? Well, not long ago you grabbed a mouthful of fish like these. The next thing you knew you felt weak and wobbly. Your blood pressure dropped so much that your mouth relaxed and your dinner swam away. You weren’t hurt, but you felt terrible! Now you remember that unpleasant encounter every time you see fangblennies or any fish resembling them. The venom of the fangblenny has done its job, and the lesson wasn’t even painful!

The Many Faces of Venom

Venom is produced by many sorts of animals. It usually contains a variety of biomolecules, many of which have other nontoxic physiologic functions. And those toxins act in a variety of ways—causing pain or inflammation, dropping blood pressure, inhibiting or stimulating blood coagulation, paralyzing or overstimulating nerves, and so forth. Some—like certain unusual components of mamba venom—even inhibit pain with narcotic-like efficiency.

The study of venom toxins provides medical science with clues to help in the pharmaceutical industry. Some cone snails, for instance, release a super-fast-acting form of insulin into the water near potential prey. The insulin is rapidly absorbed through the gills, and as the target fish’s blood sugar level plummets so does its ability to flee from danger. An enterprising cone snail can thus render an entire school of fish disoriented enough to engulf with its net-like false mouth. 1 Because cone snail insulin acts three times as fast as the fastest available therapeutic insulin on the market, scientists hope to build a faster-acting insulin for human use by studying the differences between cone snail and human insulin molecules.2

Similarly, the pain-inhibiting mambalgins in mamba venom, which are encoded by the duplicate copies of genes that encode physiologically useful nontoxic molecules, may help pharmaceutical scientists develop more effective painkillers. Hoping to uncover new and useful pharmaceutical insights, an international team of scientists has been studying the venom of the fangblenny. Reporting their findings in Current Biology, they believe the venomous fangblenny may be the only creature that evolved a venomous bite for defense.3 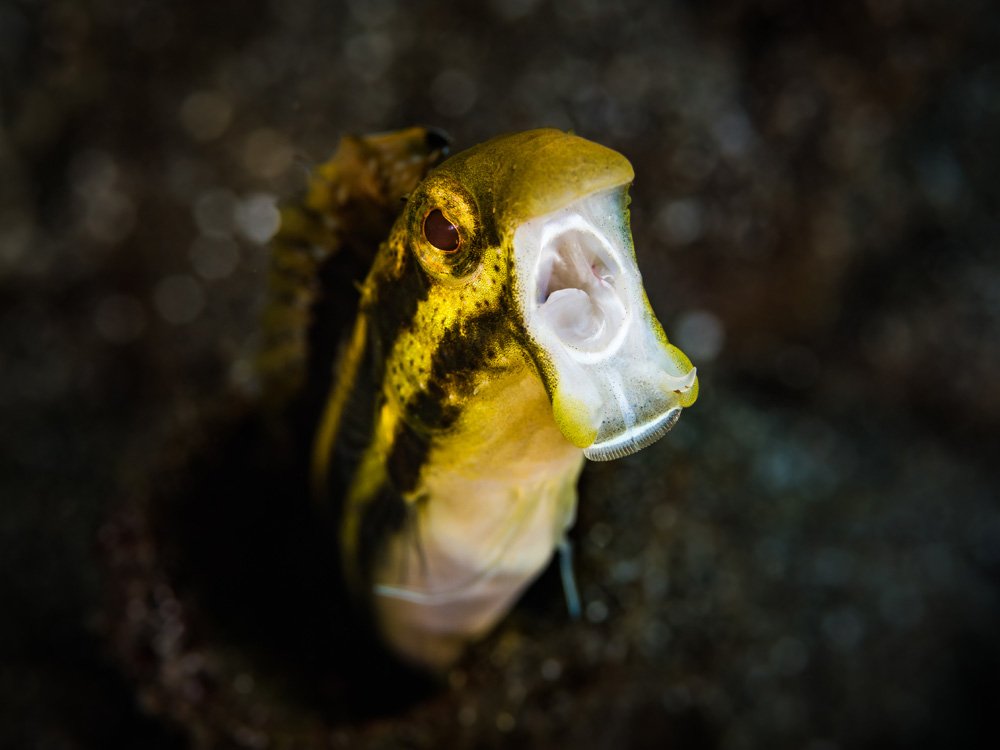 This nonvenomous fangblenny has fearsome looking fangs that are tiny, but they inspire respect because it looks just like the venomous variety that packs a powerful punch.

More than 2,000 species of fish are venomous,4 greatly outnumbering venomous snake species. Most venomous fish deliver a painful defensive sting through spines on their backs. But the fangblenny, instead of spines, has a prominent pair of lower canine teeth, hence its name. The fangblenny is part of a select group, as only two percent of venomous fish use teeth to deliver their toxins. And unlike most venoms, this one does not hurt. When scientists injected it into mouse paws, the mice were not irritated by it.5

All fangblennies have fangs, yet most are nonvenomous. Only those of the genus Meiacanthus have toxin-secreting tissue around the base of their fangs as well as grooves in the front of the fangs to allow the venom to enter the bite. Because only about 30 of the 100 species of fangblenny have venom to go with their ubiquitous fangs, evolutionary scientists conclude that the blenny’s fangs evolved before its venom.

The venom of the fangblenny is a mixture of three toxins, none of which have ever been found in fish venom. One is an enzyme belonging to a class of chemicals commonly found in snake, scorpion, and bee venoms. This phospholipase breaks down certain sorts of fat molecules. It is found in large amounts in secretions from Meiacanthus but also in miniscule amounts in the secretions of nonvenomous fang blennies. The other two toxins are found only in the venomous variety of blenny. Both dramatically lower the blood pressure in animals receiving it without affecting their heart rate. One of these is a neurotransmitter associated with blood pressure regulation in many animals. This substance is also found in cone snail venom. And the other toxin masquerades as a narcotic, being recognized by the same receptors through which opioid painkillers affect cells. Pharmacologic applications of the study of fangblenny venom could range from painkillers to heart-friendly blood pressure medications.

Thus, like the components of many venoms, fangblenny venom consists of biomolecules that have nontoxic uses elsewhere in the body. These and similar components are found in the venom of other animals, but thus far they have not been identified in the venom of other fish. Therefore, evolutionary scientists believe the fangblenny and other venomous creatures like snakes, scorpions, bees, and cone snails acquired the information to make venom through convergent evolution. They likewise believe that fish have evolved venom convergently 18 times because venomous varieties are found in all categories of fish.6

The Best Defense: A Good Nip in the Mouth

How do we know how the fangblenny uses its venom? When predatory fish snatch a Meiacanthus atrodorsalis from the water, their attempt to eat it is typically followed by “quivering of the head with distention of the jaws and operculi” and the emergence of the little blenny from the predator’s mouth unscathed.7 In feeding experiments, predatory fish consume defanged Meiacanthus with relish, confirming the venomous bite is the defense upon which the blenny’s life depends. Those fish had evidently not had previous encounters with venomous fangblennies, for when they were subsequently fed meals of intact Meiacanthus, they not only spit them out but also avoided them in the future.8

Since predators seem to remember their unpleasant encounters with Meiacanthus, looking like a venomous fangblenny is almost as useful a defense as being one. Around 20 species of fish—not just fangblennies but some non-blennies too—mimic the bright color pattern of Meiacanthus or their swim-and-dart pattern of movement. Some of these mimics even put their masquerade to use in getting their own meals. These species are micropredators, animals that dart in and nip a bit off a larger fish and then swim away. They get away with this behavior, not because of any venomous effect, but because the larger fish are reluctant to bite into a blenny.

The Genesis of Defense

Because blenny-venom components and blenny mimicry occur in different kinds of animals, the researchers studying fangblenny venom believe that their discoveries have provided a new understanding of the convergent evolution of toxicity as well as the convergent evolution of defensive mimicry. Their findings do help us understand the way the blenny and other animals in their ecosystems interact, as well as the various toxic applications of these biomolecules. However, they do not reveal anything about how convergent evolution could have equipped different kinds of animals with the same sorts of things.

Those who believe in molecules-to-man evolution, whether they realize it or not, are rejecting the biblical history that God—the only eyewitness to our origin—provided in his Word. Within this evolutionary worldview, the idea that death drives the evolution of better and better defensive and attack strategies and anatomies makes sense. After all, those with the best defense and the best predatorial skills are most likely to survive and reproduce other creatures so equipped. However, from the standpoint of science, there is a problem with that way of thinking. Observational science offers no verifiable proof that one creature can evolve into a new and more complex sort of creature, no matter how desirable it might be to do so.

Animals reproduce and vary only within their created kinds. This observable fact affirms the truth of God’s account of creation recorded in Genesis chapter 1. Traits that enhance survival—like the ability to make your attacker woozy or to look like creatures that can do that—are readily understood as survival-savvy variations within the genome of each created kind of creature. And the fact that many components of venom are variations or redirected uses of nontoxic physiologic substances is no surprise from the creationist point of view. Science has shown no way for an animal to obtain new genetic information to become a more complex or different kind of animal, but toxins produced by duplicate copies of genes (and possibly subsequent mutation) an animal already has—as is seen in some snake venoms—demonstrate how variations in the created genome can produce many useful traits.

The world God created 6,000 years ago was very good. No animals killed and ate each other. Defense was not needed. But God provided in each genome he created an enormous potential for variation, limited by the design to reproduce only with their created kinds. After Adam’s sin introduced death and suffering to the world, and the pressure of predation interacted with the variations occurring within each created kind, nature did become “red in tooth and claw.”9 But nothing in Scripture or observational science supports the idea that molecules-to-man evolution brought new more complex kinds of animals into existence.

The fangblenny doesn’t rip anything to pieces with its fearsome looking fangs. It doesn’t even inject a painful or deadly venom. However, venomous varieties of fangblennies do deploy biologically active molecules as an effective defense against predators. This ability optimizes their survival as well as the survival of those fish that look or even move like them. This is a great example of how the variations that occur as animals have reproduced after their kinds for the past 6,000 years have produced many traits that are useful in this sin-cursed world.

Previous Article “In Adam’s Fall We Sinned All”: Does Genesis 3 Teach the Fall of Man? Next Article Eroding the Historical Adam: A Response to Adam and the Genome