Did Hair and Feathers Come from Fish Scales? 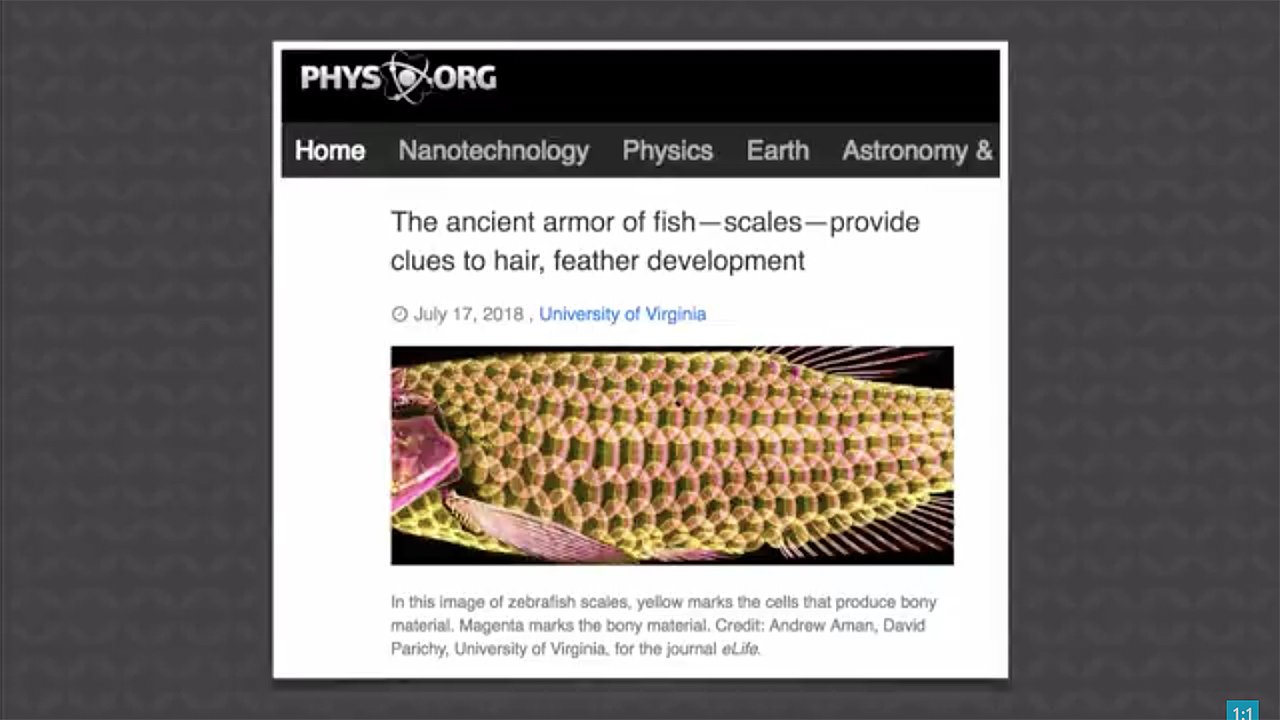 Zebrafish are one of the most commonly used research animals in the world—the lab rats, if you will, of the fish world—and various scientific studies use them for a wide variety of purposes. Because of their frequent use, zebrafish often show up as part of evolutionary research, including a recent study comparing their scales to hair and feathers.

This particular study looked at the molecular mechanisms of scale development in zebrafish, something that had been relatively overlooked until now. The article begins with the statement,

When sea creatures first began crawling and slithering onto land about 385 million years ago, they carried with them their body armor: scales.

These researchers begin by assuming that the earth is millions of years old. This is not observational science (i.e., it’s not directly testable, observable, or repeatable) but is a worldview-based interpretation of the past.

The study’s authors claim their research shows that the “molecular mechanisms of scale development in fish remain remarkably similar to the mechanisms that also produce feathers on birds, fur on dogs and hair on humans—suggesting a common evolutionary origin for countless vastly different skin appendages.” Because these researchers start off with the assumption that evolution is true, it’s not surprising that their interpretation of what they discovered reflects this presupposed belief. They are simply interpreting the evidence through the lens of their evolutionary worldview.

The observational evidence tells us nothing about the origin of these structures.

This study makes some good observations, but, because it assumes evolution is true, the interpretation of the evidence is wrong. These researchers believe that by understanding scales, we can understand how hair and feathers develop since they are believed to have a common origin. But the observational evidence we study today tells us nothing about the origin of these structures. Just because these structures share somewhat similar molecular pathways of patterning does not mean they share a common ancestor. And there are huge differences in the final structures (appendages) that are formed that are the result of different sets of genes in the various organisms.

Creationists look at the same observational evidence—molecular similarity—and interpret it very differently. Zebrafish have scales that were designed to be scales, birds have feathers that were designed to be feathers, dogs have fur that was designed to be fur, and humans have hair that was—you guessed it—designed to be hair. These structures are not changing into anything else. Mere similarity of patterning pathways in early development does not imply common ancestry of diverse creatures and structures—that’s an interpretation of the evidence that comes from an evolutionary worldview. In a biblical worldview, such developmental similarity illustrates the work of a common Designer—the God of the Bible—not a common ancestor.

I discussed this item today on Answers News with regular cohost Dr. Georgia Purdom and frequent guest Avery Foley, an AiG staff writer. Answers News is our twice-weekly news program filmed live before a studio audience here at the Creation Museum and broadcast on my Facebook page and the Answers in Genesis Facebook page. We also discussed the following intriguing topics: