Do smart crows reveal an alternate evolutionary path to intelligence?

Crows and their cousins like ravens take the prize for intelligent avian behavior. They are more often thought of today as “feathered primates” than “bird brains.” Neurobiological research shows that birds’ brains are wired differently from primates’. Evolutionary researchers therefore believe that intelligence evolved along different routes in birds and mammals.

Corvids (jays, jackdaws, crows, and ravens) exhibit cognitive abilities that seem to rival those of primates. Their behavior is flexible enough to make appropriate arrangements for their future needs. Corvids often adjust their behavior according to the behavior of other birds of their own species. Jays recall numerous hiding places for their stashes and change hiding places to avert theft. Crows are also known for their excellent memory, remembering for years people who annoy them. Some birds, like primates, can improvise tools to get at a goodie they desire. And like other songbirds (and most pet dogs), these birds exhibit auditory learning skills.

Perhaps most significantly, write Tübingen neurobiologists Lena Veit and Andreas Nieder in Nature Communications, “Corvids seem to extract general principles to guide behaviour quite swiftly.”1 Such skills are familiar to us in mammals such as herding dogs that respond individually to varying circumstances. But when birds do something that we think of as a skill confined to humans or our furry friends, we are impressed. Nevertheless, because a bird’s forebrain is proportionately much smaller than a mammal’s, researchers in the past didn’t take avian intelligence seriously. 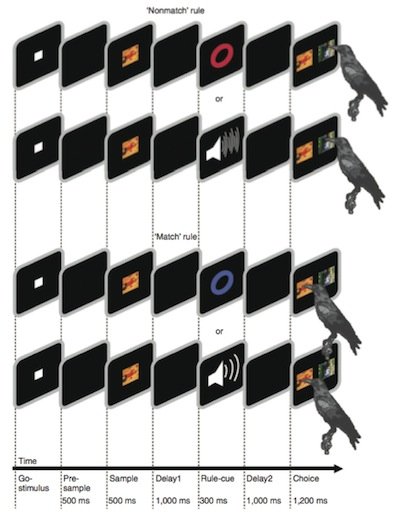 Crows can make on-the-fly choices according to signals that randomly change the rules in an image-matching game. They perform at least as well as primates and even people, though the neuronal pathways in their brains differ. IMAGE: Felix Moll, Institute for Neurobiology, University of Tübingen through Science News.

This schematic illustrates the four “rules” directing two crows to match or not match the image on the screen. Each crow was accurate more than 90% of the time at obeying either a visual or an auditory signal giving it directions. Image by L. Beit and A. Nieder, “Abstract rule neurons in the endbrain support intelligent behavior in corvid songbirds,” Nature Communications 4 (28 November 2013): 2878, doi:10.1038/ncomms3878.

Brain Power To Crow About

Veit and Nieder’s two laboratory crows learned to match the images they saw on a computer screen. But they also learned to choose, on cue, the image that didn’t match.

In order to know whether winning the game required matching or non-matching, the birds learned to respond to several cues. Matching cues were either a blue circle or an upward auditory sweep. Non-matching cues were a red circle or a burst of white noise. In other words, after seeing a picture, if a bird either heard an upward auditory sweep or saw a blue circle on screen, he was supposed to match the picture he had just seen. A red circle or a white noise sound instructed the bird to choose the non-matching picture. No matter how randomly the cues varied, the birds performed correctly more than 90% of the time. Even unfamiliar pictures were no match for these crows.

While the crows were playing this delightful game, Veit and Nieder monitored neuronal activity. They pinpointed which neurons engaged as the crows decided which protocol to follow. Certain neurons fired whenever a bird was about to follow a matching cue. Other neurons fired moments before the birds followed a non-matching cue. Mistakes were preceded by a firing of the wrong neuron. Soon the researchers could accurately predict how each bird would respond according to which neurons fired. Their study confirms that birds process and act on information in a different way from the way primates do.

Birds Can Be Smart But Not Cerebral

Our brain’s cerebrum is the home of complex cognitive functions. The cerebrum develops from the “telencephalon,” a portion of the embryonic neural tube. Our prefrontal cortex (PFC) orchestrates many cerebral activities. The PFC is where our brains organize sensory input and prioritize what to do about it.

Because the bird cerebrum is proportionately smaller than that of mammals, it was long thought that birds couldn’t really be intelligent but could only mimic and respond to conditioning. Behavioral neuroscience has revealed that birds don’t need a large cerebrum to be intelligent, however, because they use a different part of the brain to sort information and decide how to react. The bird “decision center” is the nidopallium caudolaterale (NCL).

Primates do not have a NCL, but primates can play the same games. Primate studies have shown that neurons firing in the prefrontal cortex (PFC) predict primate responses during games like these in the same way the NCL neurons do in birds.

While bird brain anatomy differs substantially from mammalian, both the prefrontal cortex (PFC) and the nidopallium caudolaterale (NCL) develop from the same general region of their embryos. Therefore, the evolutionary researchers write that the PFC and NCL “evolved from the same structure in a common ancestor.”1 They believe birds and mammals diverged from this hypothetical common ancestor 300 million years ago.

In comparing the mammalian PFC and the bird NCL, many of their connections to other parts of the brain differ. The overall architecture of the mammalian and bird brain also differs, and the expression of genes that govern their brain development differs substantially. “Therefore,” the evolutionary researchers write, “the avian NCL is considered to be a functional analogue of the mammalian PFC, a structure with similar function but different evolutionary origin.”1

The researchers interpret their results as a demonstration that intelligence evolved along different pathways in primates and in birds. While the neurons regulating decision-making are similar, Veit says, “Many functions are realized differently in birds because a long evolutionary history separates us from these direct descendants of the dinosaurs. This means that bird brains can show us an alternative solution out of how intelligent behavior is produced with a different anatomy.”

There is an epic difference between embryonic and evolutionary development.

The embryonic brain differentiates from a neural tube. The “higher” portion of the vertebrate brain generally develops from the “telencephalon” portion of the neural tube. Yet this general similarity in embryonic development simply reflects a pattern that works and is sensibly used by God, our Common Designer, to design many kinds of vertebrates. Likewise, divergent ways that embryos develop do not reflect evolutionary development, just the developmental steps designed by God to produce the brain anatomy unique to each kind of vertebrate.

Evolutionists generally consider embryonic development to be a pattern reflecting evolutionary development. They hang onto this form of “recapitulation theory” despite the lack of any actual evidence to support it and in spite of the fraudulent support ascribed to it by its most famous proponent, the discredited Ernst Haeckel. This is no surprise, since molecules-to-man evolution demands the successful stepwise addition of traits over time in order to build each more highly evolved creature. Embryonic development illustrates how traits get added in a stepwise fashion to produce a fully functional organism. Evolutionary transitions up the tree of comparative anatomy, however, have never been observed and are only presumed by evolutionists to have happened over millions of years. While embryology seems to provide a convenient pattern for evolution, the former is observable and the latter imaginary.

Any science fiction afficionado can spin tropes in which futuristic humans contend with highly evolved intelligent avians or reptiles, though such stories have gotten less attention than those with highly evolved apes. But the operative word here is fiction. The notion that evolution somehow experimented with different ways to achieve intelligence and found at least two that worked—mammalian and avian—is as imaginative and lacking in scientific support as the science fiction plots woven from that notion.

God endowed many animals with intelligence, but with different brain designs that enable intelligent behavior. While “bird brains can show us an alternative solution out of how intelligent behavior is produced with a different anatomy,” these alternate designs do not demonstrate that intelligence evolved in man, bird, or beast. They are simply different designs God created about 6,000 years ago.

Interpretation of brilliant bird behavior or the neuroanatomy that makes it possible as evolutionary evidence is based on faith in a godless, naturalistic, evolutionary origin that rejects God’s eyewitness account of history in favor of the unsubstantiated and unverifiable notions of man.

Previous Article Ancient Meteorite Said to Harbor Secrets of Watery Martian Past Next Article Mystery of the Flower’s Missing Pollen: A Paleobotanical Puzzle