Either way, evolution gets the credit!

Experts in animal behavior, Professor Alex Kacelnik’s Behavioral Ecology Research Group at Oxford is raising questions about the bias shown by those investigating “pro-social” animal behavior. Kacelnik’s team has examined recent studies of rescue behavior in rats and ants. They suspect investigator bias because virtually identical behavior is interpreted as evidence of cognitive empathy in rats but only a naturally selected survival instinct in ants. 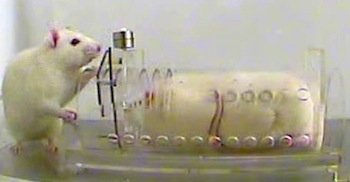 When a rat releases his buddy without a reward, what is his motivation? Does he even understand what he’s doing and why? There have been studies in recent years suggesting rats really get it. Oxford’s Alex Kacelnik calls those conclusions into question. Image from www.wired.com.

In both the rat and ant studies, the animals made vigorous efforts to free trapped members of their own species (in the case of rats) or colony (in case of ants). As we discussed previously, some scientists are wondering whether the real problem these animals are seeking to relieve is their own stress induced by their “neighbor’s” plight. Kacelnik’s group joins that chorus of dissenting voices, concluding that empathy is, as far as science has demonstrated so far, a uniquely human trait.

“Empathy, the capacity to recognize and share feelings experienced by another individual, is an important trait in humans, but is not the same as pro-sociality, the tendency to behave so as to benefit another individual,” they write. “Given the importance of understanding empathy’s evolutionary emergence, it is unsurprising that many studies attempt to find evidence for it in other species.”1

Kacelnik’s team is not casting any stones at evolutionary theory but instead refining its application. “Empathy has been proposed as the motivation behind the sort of ’pro-social’ rescue behavior in which one individual tries to free another,” says Kacelnik. “However, the reproductive benefits of this kind of behavior are relatively well understood as, in nature, they are helping individuals to which they are likely to be genetically related or whose survival is otherwise beneficial to the actor. To prove empathy any experiment must show an individual understands another’s feelings and is driven by the psychological goal of improving another's wellbeing. Our view is that, so far, there is no proof of this outside of humans.”

Kacelnik points out that investigators tend to anthropomorphize the behavior of furry mammals and allow that bias to color their evolutionary conclusions.

Kacelnik points out that investigators tend to anthropomorphize the behavior of furry mammals and allow that bias to color their evolutionary conclusions. But he clearly supports evolutionary interpretations. He wrote in earlier work concerning smart crows, “The straightforward application of Darwinism to cognition seems a better idea day by day.”2 The correct evolutionary interpretation of both the rat and the ant behavior, Kacelnik’s team here writes, is that the behavior was “designed by natural selection to benefit another” (emphasis theirs), adding, the “adaptive design interpretation is justified because both ants and rats can obtain reproductive benefits by helping group mates who, in nature, are likely to be genetically related. Even if rats in a group were not genetically closer than random, survival of group mates must bring evolutionary benefits; why live in a group otherwise?”3

After all, Kacelnik’s team points out, what does a rat really understand about the emotional state of its brother? It is commendable that Kacelnik calls on animal behavioralists to be more rigorous in their work, not allowing their anthropomorphic biases to influence their conclusions. While Kacelnik makes a reasonable point about the advantages of cooperation—and we’ll accept that he didn’t really intend to imply that natural selection was an actual intelligence that designed anything—like other evolutionists he still clings to the importance of understanding the evolution of, for instance, empathy in humans. Kacelnik has written that he and those in his group “acquire a habit of thinking about ecology, psychology and evolution in whatever topic they are dealing with.”4 They say evolutionary considerations influence “the selection of research questions”5 and form an essential part of “the explanations submitted,”6 so evolutionary thought no doubt colors their interpretations in every area.

Thus Kacelnik has written, “Because humans are outstanding among animal species in their general intelligence and in their sophistication as users and makers of tools, it is not surprising that tool use is often invoked among the candidate traits (together with language, cumulative culture, and excessive prosociality) that may have promoted the development of human intellectual uniqueness.”7 He thus acknowledges human uniqueness yet not the ultimate source of it.

Our common Designer, God, reports to us in the Bible that He created all kinds of animals about 6,000 years ago. The very same week, He created Adam and Eve in His own image. He used common designs to accomplish similar functions in many and to make much adaptation possible, but He created mankind unique. Even differing animal cognitive abilities may well have their roots in God’s original design, as in the Bible we are told of the ostrich “God deprived her of wisdom, and did not endow her with understanding” (Job 39:17), though we cannot know how many differences developed after the curse of sin entered the world. While it’s interesting to study animal behavior and be awed by its diversity and complexity, it is not something that evolved in an upward process ultimately leading to human empathy. God clearly created all kinds of animals and human beings without evolution, to reproduce after their kinds, by the power of His spoken word. Adam did not find any animals like himself, the Bible reports (Genesis 2:20), because he, like Eve whom God would soon create, was made in the image of God with attributes and understanding simply not in the “toolkit” of the animal kinds.