Mystery of the Flower’s Missing Pollen: A Paleobotanical Puzzle

Fossil has paleobotanists puzzling over the evolutionary origin of floral pollen.

Fossilized leaves of a flowering plant from the Dutch Gap canal along Virginia’s James River present an evolutionary puzzle to paleobotanists. The mystery of the missing pollen in the Potomac region’s Lower Cretaceous rock is raising questions about the order of early botanical evolution. The fossilized leaves belonged to a previously unknown species of flowering plant and were found unusually deep in the fossil record. The absence of corresponding pollen has evolutionists wondering about the order in which the earliest flowering plants evolved their parts.

The fossilized leaves are typical of a eudicot—a “true dicotyledon” (plant whose seedling has two leaves). Seventy percent of angiosperms (flowering plants) are eudicots. This particular eudicot fossil was found in Lower Cretaceous rock. Eudicots are rare this deep in the fossil record. In fact, none have ever before been found in North American rock dated, like the Dutch Gap fossil bed, at 115 to 125 millions years.

Flowers are pretty fragile, and therefore the presence of flowers in the fossil record is marked primarily by pollen. Pollen associated with flowers differs from pollen associated with non-flowering plants. Pollen grains have a hard casing, which may be one reason they are generally preserved in the fossil record. Pollen is considered a reliable indicator of the gymnosperms (non-flowering seed-producers like conifers and ginkgos) and angiosperms represented in each fossil layer.

Pollen grains have apertures such as pores, thin areas, and ridges in their walls to allow the gametes inside to exit. Such characteristics enable botanists to identify the sorts of plants pollen grains came from. Because none of the characteristic three-pored eudicot pollen grains were found in the Dutch Gap fossil bed, investigators are wondering whether the missing pollen indicates that eudicot leaves evolved before eudicot flowers.

“Either the plant was very rare, and we just missed its pollen,” says University of Maryland graduate student Nathan Jud, lead author of the paper in the American Journal of Botany describing the species. “Or it's possible that eudicot leaves evolved before (three-pored) pollen did.” 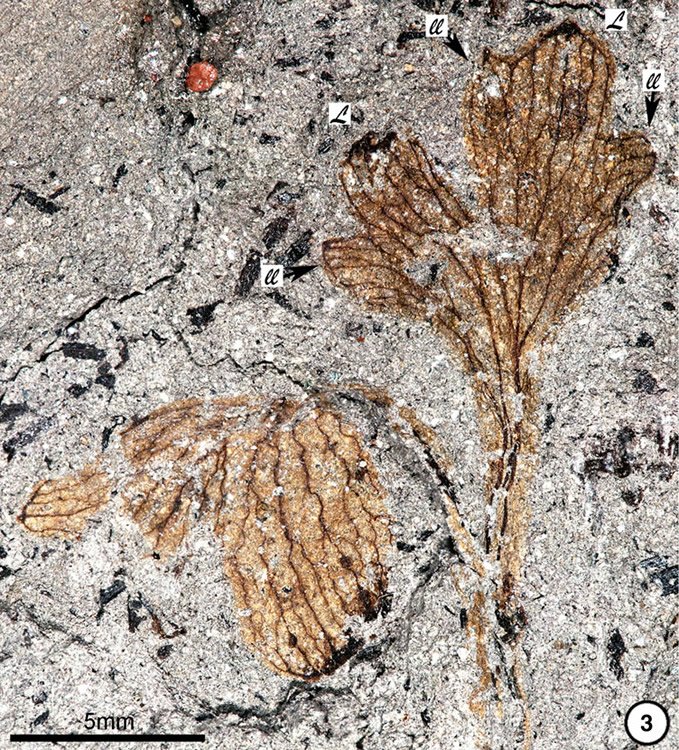 The complex architecture of this fossilized leaf from the Lower Cretaceous Dutch Gap fossil bed near Virginia’s James River marks the lowest occurrence of eudicot flowering plants in the fossils of North America. Surprisingly, no corresponding fossilized eudicot pollen grains have been found. The species was named Potomacapnos apeleutheron in honor of the black freedmen forced by the Union Army in 1864 to dig the canal that uncovered the fossil bed. Image by N. Jud and L. Hickey, via American Journal of Botany.1

Based on the fossil layers in which various types of pollen are found, evolutionists think flowering plants evolved from gymnosperms about 160 million years ago but did not become highly diversified and dominant until later in the Cretaceous period, about 120 million years ago. They interpret increasing amounts of pollen in higher fossil layers with evolutionary progress in the ecological dominance and diversification of flowers.

The leaves found at Dutch Gap have the complex architecture typical of non-woody flowering plants. These leaves are, like three-pored pollen grains normally found with eudicots, associated with flowering plants in the eudicot group. Evolutionists believe that all eudicots evolved from a common ancestor. Dutch Gap’s conspicuously absent eudicot pollen, according to Jud’s study, raises the question of whether that common ancestor evolved compound leaves or pollen-producing flowers first.

Digging Up The History

Jud found the eudicot leaf fossil in a collection of fern fossils from Dutch Gap. Ferns are the more typical plant found in Lower Cretaceous rock. The fossilized leaf was found at Dutch Gap by Yale paleobotanist Leo J. Hickey (now-deceased) in 1974.

The Dutch Gap fossils were originally unearthed by the shovels of freed black men brutally forced by the Union Army in 1864 to dig a canal. Jud named the species Potomacapnos apeleutheron to memorialize the plight of the impressed laborers who were abused by the very army popularly credited with their emancipation. Their shovels uncovered there in the Potomac region the deepest known flowering fossils in North America. The species name apeleutheron comes from the Greek word for freedmen. 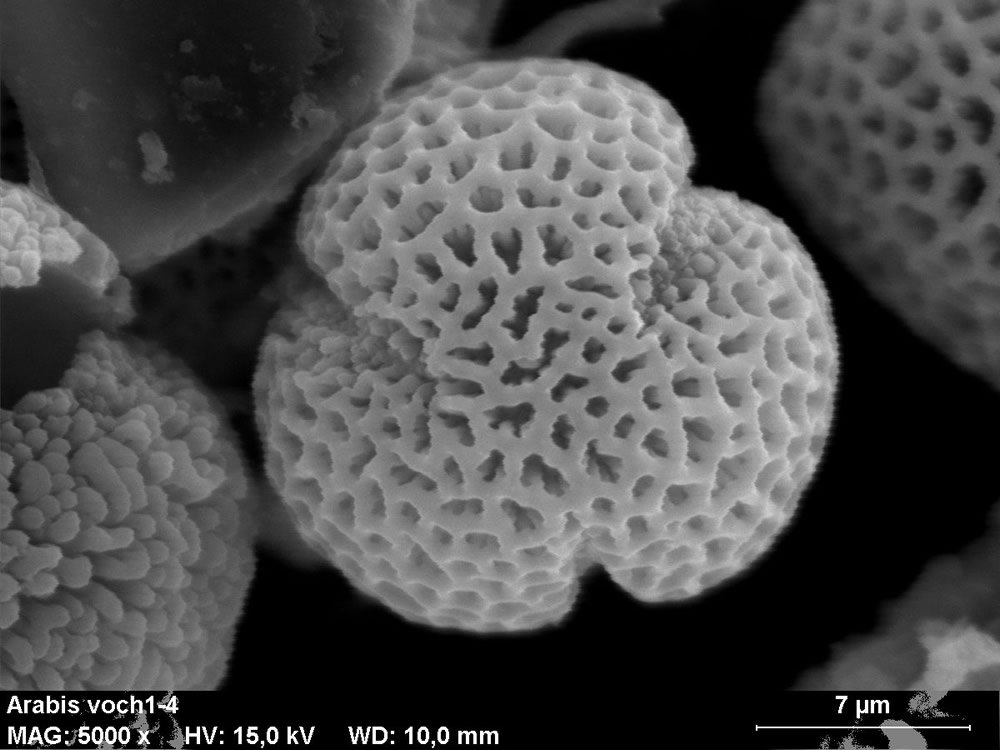 This is a pollen grain typical of all eudicots. It has three pores through which the male gametes emerge during fertilization. No such eudicot pollen fossils have been found with Potomacapnos apeleutheron’s leaves. Pollen is generally well-preserved, so researchers consider this puzzling. Image by Hirndurst, via Wikipedia Commons.

Digging up the historical truth about the people of Dutch Gap has proven easier for evolutionary thinkers than solving the pollen puzzle. Steven Miller, co-editor of the University of Maryland's Freedmen and Southern Society Project, located a letter from 45 of these impressed former slaves protesting their treatment to Union General Benjamin Butler. The letter, which was endorsed by a Union Army lieutenant, documents that the men were marched to Dutch Gap “at the point of the bayonet” and compelled without compensation to dig the canal. When more laborers were needed, the letter states, “guards were then sent . . . to take up every man that could be found indiscriminately young and old sick and well. the soldiers broke into the colored people's houses taken sick men out of bed.”

Learning the history of the Dutch Gap canal and its fossil bed, Jud said, “The reason you can dig fossils there is because of what they went through. I thought that instead of naming it [the new species] after another scientist, I should name it after the people who made this discovery possible.”

This historical record documents a tragic event at Dutch Gap, one that unfortunately was not at all uncommon. We accept the account of the witnesses and grieve over their suffering and the injustice they endured largely due to the racist beliefs common at that time in history. It is commendable that Jud chose to memorialize their abuse by naming this previously unknown species of flowering plant, which is similar to the modern bleeding heart, with the species name apeleutheron.

The history of flowers in the fossil record, however, must also be interpreted in accord with historical records to avoid worldview-based evolutionary biases that don’t fit the facts of biology. Because biological observations have never documented one kind of plant or animal evolving into a new, more complex kind, it is not reasonable to view the fossil record as a history of the evolution of increasingly more complex kinds of life. The history of creation, provided in the Bible by our Creator—the only eyewitness of the actual origins of earth and all kinds of life on it—provides the historical facts needed to properly interpret the fossil record and even to know when flowering plants came in to existence.

From the history recorded in God’s Word, we know that on the 3rd day of the earth’s existence, about 6,000 years ago, God created all kinds of plants He designed them to reproduce after their created kinds. Thus we can be confident that the leaves, the flowers, and the pollen of the original kinds2 of flowering plants all made their appearance on earth when God created them 6,000 years ago.

Flowers And The Flood

So if God created flowering plants about 6,000 years ago when He created the earth and all the other kinds of plants, why do we not find them throughout the fossil record? To answer this question we must recognize that none of the fossil record is a record of the emergence of evolving life forms. Much of the fossil record is, however, a record of the order in which organisms were sorted, deposited, and catastrophically buried as their habitats were overwhelmed by the rising waters of the global Flood of Noah’s day about 4,350 years ago.

We would not expect to find flowering plant fossils in the Cambrian layers because flowers don’t typically live on the bottom of the sea.

Since the Word of God records the creation of the earth and all life on it about 6,000 years ago, we know that molecules-to-man evolution—which lacks support from observational science anyway—did not happen. Thus the fossil record, which lacks the transitional forms it would need to even begin to support the evolutionary story, is not a record of the evolution of various kinds of living things. Instead, much of the fossil record reflects the order of burial of large numbers of living things during the global Flood of Noah’s Day, about 4,350 years ago.

As the Flood waters rose, as described in Genesis chapter 6–9, many habitats in the pre-Flood world would have been overwhelmed and their inhabitants—both plants and animals, along with tons of sediment—churned, sorted, deposited, and buried by the violent waters. The fact that gymnosperms appear deeper in the fossil record than angiosperms suggests that the pre-Flood world’s habitats containing a preponderance of flowering plants were geographically separated from the areas dominated by gymnosperms and quite possibly were at higher elevations.

The fossil flowers of Dutch Gap and the history associated their discovery point up the importance of paying attention to historical records in our efforts to understand the past. That is true whether we seek to know the truth about human injustices or our biological and botanical origins.