Bearded capuchin monkeys are bright little creatures, indicating that chimpanzees and crows don’t have the market cornered on animal intelligence. To crack palm nuts, these monkeys can choose and use suitable tools as anvils and hammers with great skill.

Capuchin monkeys select boulders and logs with little pits to hold their nuts steady and choose stones that make the best hammers. These skills have been reported by the same researchers previously.1 The monkeys also, according to the latest report, manipulate the palm nuts into the most stable position in the pit before striking them. They do this by knocking the nuts rapidly on the anvil’s pit, determining the orientation that leaves the nut motionless with the flattest surface upward. (The researchers suspect they combine tactile and auditory clues to do this.) The monkeys varied in skill, but the eight monkeys that “volunteered” for the project (states the article)—by collecting the offered palm nuts and smashing at least ten for the video—achieved 71–94% accuracy. The 14 blindfolded human volunteers did about as well by feeling the pits and the nuts.2 You may watch a monkey do this in a short video at www.livescience.com. 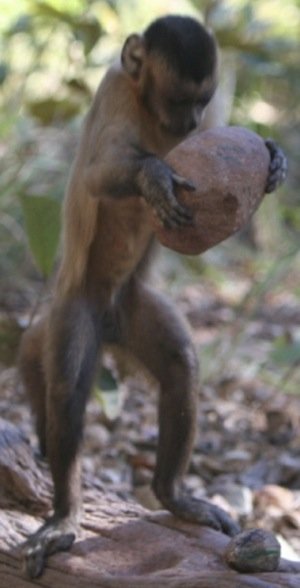 This monkey has placed the palm nut in a pit on the log-anvil such that the flattest surface is facing upward and the most rounded portions of the irregular shape are stabilized against the sides of the pit. The monkeys, which are wild but accustomed to humans, were supplied with stones placed beside the log anvils for this study. Image: original from Barth Wright through www.plosone.org

Many animals demonstrate intelligence, often in their ability to choose and use tools purposefully. Chimps have been observed to make sharp spears from sticks to catch their bushbaby neighbors for a meal.3 Crows have been observed using a series of progressively longer tools to get what they want from a bottle.4 And rooks have figured out how to plunk stones into a bottle with a floating morsel to raise the water level and bring it within reach.5

Evolutionists generally consider these demonstrations to be little glimpses into the kinds of leaps our ape-like ancestors must have made to become human. After all, in their worldview, all that exists including human intelligence must have evolved through naturalistic processes. And Darwin himself wrote in The Descent of Man that “The difference in mind between man and the higher animals, great as it is, is one of degree and not kind.”6

Thus even animals not considered to be in the evolutionary line that presumably produced humans are counted as evolutionary examples of how we got to be so bright. But is this reasonable?

Given that no kind of animal has ever been observed evolving into any new more complex kind of animal, and furthermore that no mechanism for such a transition has ever been discovered, it is not scientifically reasonable to assume that animal intelligence is a window into our past. Yet this sort of thinking has become so prevalent that even some evolutionists have questioned overblown interpretations of animal cleverness, as we discussed in our coverage of “Killjoys Challenge Claims of Clever Animals.”7 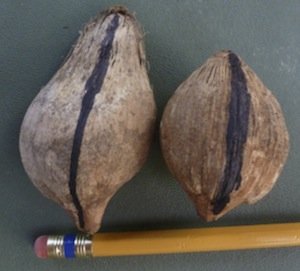 To determine whether the monkeys had indeed positioned the irregularly shaped palm nuts in the most stable position, researchers had previously marked the nuts. After removing the outer mesocarp, as monkeys themselves do before cracking, they rolled them on the floor to determine the flattest surface and marked it. Image: Dorothy Fragaszy through www.plosone.org

Biblical history tells us that God made man and woman in His image (Genesis 1:26–27). And while humans and animals have many similarities, being made in God’s image embodies many unique spiritual and mental attributes. Unlike animals, humans are able to express and understand original abstract thoughts through language. Humans generate symbolic language, whereas animal communication—as amazing as it often is—lacks the abstract symbolism, awareness, insight, and creativity evident in human speech.

Similarly, our Creator God has endowed many animals with the intelligence to sensibly use a sequence of tools to get what they need. But the mental ability to conceive of a three-dimensional design for a tool that might be needed at some point in the future rather than for an immediate need, gather the necessary raw materials and equipment, and use those tools to produce something brand new—an ordinary activity for humans—is a far cry from the sort of tool use we see in animals, clever as they are.

This author is truly impressed when I see the sorts of abilities that some animals demonstrate, whether rescuing lost hikers, herding sheep, cracking nuts, or learning to point to a banana picture to get one. I am also impressed when my dog manipulates my affections to get what he wants. But neither my dog’s ability to be sneaky nor the monkeys’ skill with tools shows how we became human or how any animal ever could.