Christian education is under attack in America as never before. Yesterday on this website, we highlighted the plight of the Romeikes, a German Christian family who is seeking asylum in America because the German government forbids their homeschool instruction. The Obama Administration is siding with the German government and its view of homeschooling, and they are seeking to deport this family who wants to educate their children in accord with God’s Word. If the U.S. Attorney General succeeds in denying their asylum, it may have chilling ramifications for religious and educational liberties in the United States.

Today, we bring your attention to another attack on Christian education. A Christian K–12 school in South Carolina, with dedicated and highly qualified Christian teachers, has come under vicious attack by atheists. Why? Because one of its instructors, a fourth-grade teacher, tested her children about biblical creation, science, and dinosaurs (using AiG resources), and she has become (in)famous on many atheist websites and blogs. 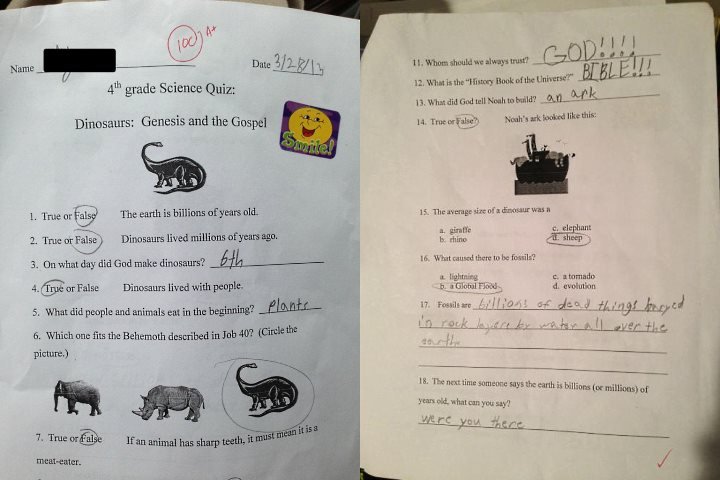 The quiz given to the students

The atheist buzz about the dinosaur-and-Bible quiz, however, is not really all that surprising. Over the past few years, we have seen atheists becoming more aggressive and intolerant towards Christians. (See the sidebar for just a few of the many examples we could cite.) They are attempting to impose their belief system (yes, their religion) on the culture.

How Are Atheists Becoming More Aggressive in America?

It seems that since the last presidential election, atheists have grown more confident about having something of a license to go after Christians. These secularists want to impose their anti-God religion on the culture. They are simply not content using legislatures and courts to protect the dogmatic teaching of their atheistic religion of evolution and millions of years in public schools. There is something else on their agenda: they are increasingly going after Christians and Christian institutions that teach God’s Word beginning in Genesis.

In South Carolina recently, a fourth-grade teacher at Blue Ridge Christian Academy (a nondenominational K–12 Christian school) showed students a DVD of a children’s program, in which AiG song-writer and dinosaur sculptor Buddy Davis and I are featured. In this DVD, we teach children the history of the universe from the Bible, with a special emphasis on teaching dinosaurs from a biblical perspective (as we do inside our Creation Museum). The teacher handed out a question sheet to the children to test what they learned from the DVD. (See the quiz above.)

A friend of one of the parents who has a child enrolled in the fourth grade class posted the quiz sheets on the internet. The parent, like all parents who have children enrolled at this academy, had signed a statement, which acknowledged an understanding that sending their child to this Christian school would mean they would be taught biblical Christianity. The parent expressed dismay that his daughter was taught a biblical approach to dinosaurs. The quiz’s posting to the internet resulted in a number of atheist websites reposting the questions and answers, and many of them responded in rage and vehement attacks on the school.

The school administrator, relatively new as the head of the academy, was shocked to find her school becoming the target of atheist attacks and even some threats. Articles on mainstream websites (like a Seattle TV station over 2,500 miles away), a UK website, and other places on the internet made the controversy grow even larger.

Now, this Christian academy is not a large school. Yet the atheists went after it with incredible fervor. The school administrator informed us she knew that the school would be involved in a spiritual battle after the quiz went public, but she was not expecting such ferocity. She told us she was shocked at the level of hate that the atheists poured down upon her, the teacher, and the school in general.

For the next two years, our special theme for the Answers in Genesis ministry is “Standing our Ground, Rescuing our Kids” (Galatians 1:4). We, too, have experienced recent increased attacks by atheists, especially whenever they discover we are influencing children with the truth of God’s Word. These anti-God people hate the fact that Christians are teaching children to stand on the authority of the Bible; they want to be the ones teaching children and indoctrinating them into atheism. Even children’s TV host Bill Nye has recently made many harsh statements against those of us who teach creation to children.

In a way, what is happening to this Christian school and also to the Romeike family should be a warning to all Christians: the atheists want your children. They are aggressively trying to demonize and marginalize Christians in their attempts to recruit your children for atheism or secularism.

Though we praise God for the minority of Christian “missionaries” who work as teachers in the public school system (and who need our prayers), government schools have increasingly become, in essence, churches of atheism. We are aware that the overwhelming majority of children raised in the church attend public schools, and thus it should not be surprising that with all the secularist indoctrination in schools, about two-thirds of our young people brought up in church are walking away from it by the time they reach college age. (See the book Already Gone for details.)

Christians can no longer straddle both sides of the chasm, for it’s getting wider.

As we wrote yesterday on this website, the growing anti-Christian attacks in America should be a warning to the church that a chasm is widening between what is Christian and what is not. Christians can no longer straddle both sides of the chasm, for it’s getting wider. They will ultimately have to decide which side they will stand on! And if those who are on God’s side stand their ground on His Word without compromise, then they may face persecution of various forms.

More than ever, God’s people need to be standing up publicly and unashamedly for the authority of His Word.

The authors of this web article have been highly impressed with the spiritual quality of this school, the administrator, and the teacher involved as they have had to cope with some very vicious attacks.1 We were encouraged to read on the school’s website that the Academy believes, “God’s truth is authoritative and is the foundation for all living and learning in order to develop a biblical worldview, while both understanding the culture in which they live and being ready to confidently defend their faith.”

It must be frustrating for Blue Ridge Christian Academy for another reason right now. Like many Christian schools, it has been struggling financially during this recession. And, of course, they don’t receive the tax money that public schools get.

At AiG, we want to help this school be a good example to the entire Christian community of how all believers should defend our faith and stand our ground so that more of our children can be rescued from this evil world. Galatians 1:4 states that Christ “gave Himself for our sins, that He might deliver us from this present evil age, according to the will of our God and Father.”

As an encouragement to this Christian school, which has been besieged lately, we ask you to contact the Academy through its website and offer your words of support—and also send it a donation as another means of encouragement. Blue Ridge Christian Academy www.brca.us is a non-profit 501(c)(3) organization; you can donate with a credit card or through PayPal at www.brca.us (see the right side of the homepage), or you can send a generous check in the mail to this address: Blue Ridge Christian Academy, 424 Hwy. 101, Landrum, SC 29356.

At the very least, please send the Academy an email or letter of encouragement—and also pray for them.

Meanwhile, AiG will be working with the school administrator and her board to see what else we can do as a ministry to help them continue the calling it has to rescue kids from this present evil age.