Homeschooled and Now Without a Home to School In?

In Romeike v. Holder, the Obama Administration presented oral arguments intended to convince a federal court to revoke the asylum granted by an immigration judge.

In an internationally watched court case that could determine whether German homeschoolers will be granted asylum or deported by the American government, the Romeike family had its asylum petition heard in a Cincinnati courtroom last Tuesday. In Romeike v. Holder (“Holder” is Eric Holder, the U.S. Attorney General), the Obama Administration presented oral arguments intended to convince a federal court to revoke the asylum granted by an immigration judge.1 Among other arguments, the government’s attorneys are arguing that parents do not have a fundamental right to determine the kind of education their children will receive. 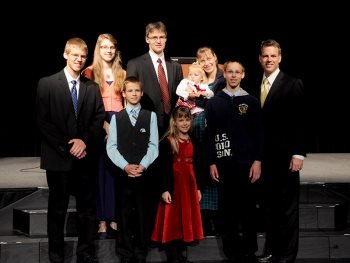 The entire Romeike family of Germany (with attorney Michael Donnelly at the far right) visited the Creation Museum last week, and Uwe Romeike, the father, spoke to the AiG staff.

The Romeikes, defended by the Home School Legal Defense Association (HSLDA), had been homeschooling their children in Germany. They believed that German public schools were teaching values that were contrary to their Christian beliefs. The government fined the family, and on one occasion the children were removed from their home by police and taken to a local public school by force. In 2008, the Romeikes, fearing continued government interference with their convictions that they should educate their children at home, emigrated to the United States. (Their fear was quite reasonable, as in 2007 German government authorities removed fifteen-year-old Melissa Busekros from her homeschooling family.) The Romeikes requested and were granted asylum on the grounds of both religious persecution and persecution for being members of a “particular group.”

In a Cincinnati courtroom on Tuesday, the room was full to overflowing with homeschool families and others. They heard Michael Farris of the HSLDA argue in front of three federal judges that the Romeike case was about whether or not the U.S. government believes “that the freedom to homeschool is something that can be coercively changed and whether Germany’s values should dictate our values.”2 After the hearing, Farris indicated there were some “tough questions” posed by the judges, adding that it is hard to predict how they will rule. It may be several months before a decision is handed down.

In the name of creating national unity, Germany does not permit parents to home educate their children. (Some other European countries also restrict that right, which is protected in the United States—for now.) Remarkably, Obama Administration attorneys are arguing that Germany is not violating anyone’s civil rights so long as no one is allowed to homeschool. Put another way, everyone is restricted equally. The Supreme Court of Germany has determined that the government must “counteract the development of religious and philosophically motivated parallel societies.”3 This unusual phrase “parallel societies” came up during oral arguments in Cincinnati last week. The German government is virtually mandating homogeneity in education. In other words, Germany is seeking to prohibit people who think differently from the government from becoming an influence in society. In 2007, the German high court ruled that parents could even lose child custody if they homeschooled their children.4

U.S. law offers political asylum to refugees on five grounds, including being of a “particular social group” and on account of religion. At least one judge last Tuesday questioned whether the treatment by the German government was real persecution and was thus true grounds for permitting the Romeikes to stay in the U.S. The HSLDA countered with the observation that the mistreatment of the Romeikes is indeed severe because the children would be removed from the home unless they attended a public or private school.

As the U.S. government threatens to send the family back to Germany, where the parents may face the loss of custody of their children, Americans should be concerned about the possible precedent the case would create in our own country. Lawyers with the Attorney General’s office implied during oral arguments on Tuesday that any government can deny the liberty of parents to direct the upbringing of their children. While U.S. courts have generally been favorable to parents in regard to how they want to educate their children, this current administration apparently wants to chip away at the rights Americans currently enjoy in home education. As the judges deliberate, they will no doubt consider the U.S. Supreme Court decision in Wisconsin v. Yoder (1972) that affirmed the right of parents to keep their children out of public schools if they had religious reasons.

With the harshness of the German government’s actions towards the Romeikes, we point out the unfortunate irony that millions of Germans suffered under the totalitarian regimes that ruled Nazi Germany in the 1930s and 1940s and communist East Germany until about 20 years ago. The Romeikes are a persecuted German family who fled a united, democratic Germany, which is now in danger of tarnishing its reputation of granting religious liberty.

As far as liberty in the U.S. is concerned, attorney Michael Donnelly, HSLDA director of international relations, shared with AiG staff the day after the oral arguments that he found it “very troubling what the Obama Administration was arguing in court” about homeschooling. He observed that the U.S. Attorney General was supporting the German government’s assertion that homeschooling is not a parental right. In essence, the Obama Administration was endorsing a belief that the upbringing of children really belongs to the government, not to the parents, and that governments have a right to educate children in the way they alone determine. As the Obama Administration chips away at the right of parents to homeschool their children, it is undermining the biblical admonition that children belong to the parents and that parents are responsible for the education of their children.

Ken Ham, president of AiG, observed that “Romeike v. Holder should be a warning to all Americans that the same arguments being heard about homeschooling in this case could be used down the road to outlaw homeschooling or greatly curb it in the USA.” He then added, “What is happening to the Romeike family is just another sign of the increasing secularization of the American culture and the spiritual battle between light and darkness raging around us. I pray the church in America will become aware of what is happening before it wakes up one day to discover our religious freedoms curtailed or eliminated.”

In Sweden, homeschooling parents have met with similar persecution by their government. A Swedish child, Domenic Johansson, was taken by force from his parents in 2009 after boarding an airplane in order to emigrate to his mother’s home so that they could continue their homeschooling. A Swedish court terminated their parental rights in December.5

If the Romeikes lose their asylum bid, they would be deported to Germany where the state has already threatened to take their children away from the parents if they do not send them to public school. Meanwhile, the Romeike family temporarily resides in Tennessee, where they have enjoyed the hospitality of many compassionate people. They have become a part of their community there and are active in a local church.

AiG prays that Christians in America, Germany, Sweden, and other countries in which homeschooling is under threat will be able to follow the clear teaching from Scripture that it is the parents who are to teach their children the truth of God’s Word (e.g., Ephesians 6:4; Proverbs 22:6; Deuteronomy 6:5–9). Biblically, the responsibility clearly belongs to parents to direct the upbringing of their children. United States courts have previously upheld that right. Whether they will in the future remains to be seen.

To keep up-to-date on this important religious liberty case, not only in Germany but also in America, and the possible ramifications for home education, visit the Romeike case page on the HSLDA website. To find out more about the case, watch this HSLDA-produced video:

Here are two AiG articles on the Romeike’s bid for asylum:

Note: Dr. Elizabeth Mitchell of AiG assisted in the research for this article.