Families: Let’s Use the Recent Atheist Attack to Teach More Kids the Truth!

I’m encouraging families across the nation (homeschool families as well as other Christian families) to join us in taking what some atheists have meant for evil and instead using it for good (Genesis 50:20). We want to get the truth of God’s Word to as many kids as possible. The effort involves a quiz on dinosaurs (which uses AiG teachings based on God’s Word in Genesis) that has become an internet sensation.

About the Recent Christian School Controversy 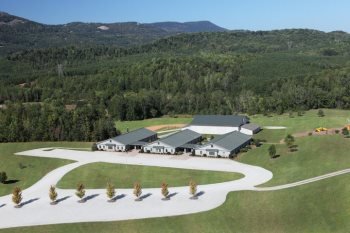 The Blue Ridge Christian Academy is located in a scenic part of South Carolina.

Recently, some atheists attacked a small Christian school in South Carolina, Blue Ridge Christian Academy, because a teacher gave her eight fourth-grade students a science quiz based on our AiG video that the students had watched called Dinosaurs, Genesis, and the Gospel. The video features Buddy Davis and me. Some atheists were vicious in their attacks on this private school (some of their comments were profanity-filled and even threatening).

The quiz was posted online by a critic of the school, and the atheists who picked up on it used it (and continue to use it) to attack this Christian school. The story has gone viral, and many media outlets have covered the atheist onslaught on this school, including the Washington Post, MSNBC, Slate.com, and the Huffington Post.

If you aren’t familiar with the controversy, I encourage you to read our recent article about this atheist attack.

Actually, some good has already come from this bizarre attack by the increasingly intolerant atheists. The school is struggling financially, but thankfully a lot of people have sent donations to help the school stay open. (You can make a donation through their website.)

A few days ago, AiG sent the school a comprehensive library of creation-apologetics resources and curricula so that BRCA students can be even better equipped to defend the Christian faith against secular attacks.

What has happened to this school has once again highlighted how intolerant many atheists have become. They don’t want true religious freedom in this country. They want to impose their anti-God religion of atheism, evolution, and millions of years on all children! In the current political climate, atheists think they have a license to go after Christians as some kind of enemy in this nation.

Please Join Us in Rescuing Our Kids!

I am asking you to join AiG in following this year’s theme of “Standing Our Ground, Rescuing Our Kids” (based on Galatians 1:4). We want to see as many families and churches as possible turn this atheist attack for good—and to God’s glory.

Blue Ridge Christian Academy has given us permission to make its science quiz—which is at the center of this atheist attack—available to everyone. In addition, AiG is making available—for free—an online viewing (also available to download for free) of the children’s video Dinosaurs, Genesis, and the Gospel. This is the video that formed the basis for the questions that appeared in the test. AiG is also making available a booklet on dinosaurs I have written as a free PDF download.

The instructions are given below. Please download the quiz that has stirred up the atheists. Then have as many children (and parents) as possible watch the video, and have children take this test (and parents can take it, too). Then please let us know through our various Facebook sites that you have done this:

Let’s show the atheists how what they meant for evil, God meant for good: “But as for you, you meant evil against me; but God meant it for good, in order to bring it about as it is this day, to save many people alive” (Genesis 50:20).

Finally, please send a note of encouragement to the staff and students of Blue Ridge Christian Academy.

As a bonus for you, for the next nine weeks (expiring July 31, 2013), if you use this coupon code (DINO), you can order almost anything from the AiG online store (including the DVD version of Dinosaurs, Genesis, and the Gospel) and receive at least a 20 percent discount. This special excludes case quantities and any already-discounted items. You must order via the AiG website. (Sorry, but this special 20-percent discount does not apply to phone or mail orders.)

Let’s have your children (and you) watch the video and then take the quiz. And let us know how the children did.

Send Us a Copy of Your Completed Quiz

If you send me a copy of a child’s completed quiz, I will send the child a letter, along with two colorful cards that summarize the content of the dinosaur video. Please send it to the following address:

And on Facebook (Ken Ham’s page and Answers in Genesis’ page), don’t forget to let us know what you are doing in this campaign and any positive responses from completing this project.