The special “Tower of Babel” issue of Answers magazine covers some fascinating aspects of the Babel account as recorded in Genesis 11. 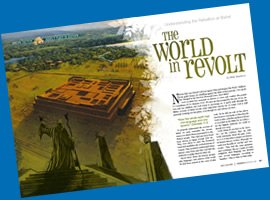 What words come to mind when you think of the events that took place at the Tower of Babel: rebellion, judgment, confusion, scattering, separation? While these words accurately describe different aspects of this event, more importantly, each one represents valuable lessons that we can learn from this history-altering event.

The special “Tower of Babel” issue of Answers magazine covers some fascinating aspects of the Babel account as recorded in Genesis 11. Here is a preview of some of the articles you will find in the April–June 2008 issue:

Babel’s Connection to Our World Today

The effects of God’s judgment on the rebellious settlers at Babel can still be felt today. This time in history explains much of what we see today in our government, languages, people groups, and much more.

The following articles show the connection Babel has on our world today:

This issue also digs deeper into some other fascinating topics such as fossils, genetics, geology, and monarch butterflies.

Kids will love matching the fuzzy caterpillars with the beautiful butterflies on the colorful pull-out poster. They’ll also learn about the life cycle of monarch butterflies and some other interesting facts. The pull-out chart provides a great reference for parents and teachers on the various ways that Babel explains our differences.

As you’ll see as you thumb through the pages of this issue, the events that took place at the Tower of Babel go beyond a simple lesson in history. Packed in these pages are relevant lessons we can learn and apply to our lives today. Who will you share this knowledge with?