The Significance of a World of Stories Based on Truth

There are hundreds of stories and legends about a worldwide flood. Why do diverse cultures share a strikingly similar story?

Did you know that stories about a worldwide flood are found in historic records all over the world? According to Dr. Duane Gish in his popular book Dinosaurs by Design, there are more than 270 such stories, most of which share a common theme and similar characters. So many flood stories with such similarities surely come from the Flood of Noah’s day.

The worldwide catastrophic Flood, recorded in the book of Genesis, was a real event that affected real people. In fact, those people carried the knowledge of this event with them when they spread to the ends of the earth.

Stories of the Flood—distorted though they may be—exist in practically all nations, from ancient Babylon onward.

The Bible declares that the earth-covering cataclysm of Noah’s day is an obvious fact of history. People “willingly are ignorant [that] . . . the world that then was, being overflowed with water, perished” (2 Peter 3:5–6, KJV). This Flood left many evidences, from the fact that over 70% of the rocks on continents were laid down by water and contain fossils, to the widespread flood legends. Both of these evidences provide compelling support for this historical event.

If only eight people—Noah’s family—survived the Flood, we would expect there to be historical evidence of a worldwide flood. If you think about it, the evidence would be historical records in the nations of the world, and this is what we have, as the chart [below] indicates. Stories of the Flood—distorted though they may be—exist in practically all nations, from ancient Babylon onward. This evidence must not be lightly dismissed. If there never was a worldwide Flood, then why are there so many stories about it?

The reason for these flood stories is not difficult to understand. When we turn to the history book of the universe, the Bible, we learn that Noah’s descendants stayed together for approximately 100 years, until God confused their languages at Babel (Genesis 11:1–9). As these people moved away from Babel, their descendants formed nations based primarily on the languages they shared in common. Through those languages, the story of the Flood was shared, until it became embedded in their cultural history.

Hawaiians have a flood story that tells of a time when, long after the death of the first man, the world became a wicked, terrible place. Only one good man was left, and his name was Nu-u. He made a great canoe with a house on it and filled it with animals. In this story, the waters came up over all the earth and killed all the people; only Nu-u and his family were saved.

Another flood story is from China. It records that Fuhi, his wife, three sons, and three daughters escaped a great flood and were the only people alive on earth. After the great flood, they repopulated the world.

As the story of the Flood was verbally passed from one generation to the next, some aspects would have been lost or altered. And this is what has happened, as we can see from the chart. However, as seen in the given examples, each story shares remarkable similarities to the account of Noah in the Bible. This is true even in some of the details, such as the name Nu-u in the Hawaiian flood story. “Nu-u” is very similar to “Noah.”

What These Stories Mean

God clearly sent a worldwide Flood to punish humankind for their evil and corrupt ways (Genesis 6:5, 11). Even though Flood-affirming evidence from geology and other areas of study is abundant, we don’t need this evidence to know what happened. Starting with the Bible and the history that God faithfully recorded there, Christians have a tool to interpret the evidence that evolutionists and non-Christians do not. We have the record of what happened, from the One who was there.

Dr. Duane Gish, in Dinosaurs by Design, says there are more than 270 stories from different cultures around the world about a devastating flood. This chart shows the similarities that several myths have with the Genesis account of Noah’s Flood. Although there are varying degrees of accuracy, these legends and stories all contain similarities to aspects of the same historical event—Noah’s Flood. 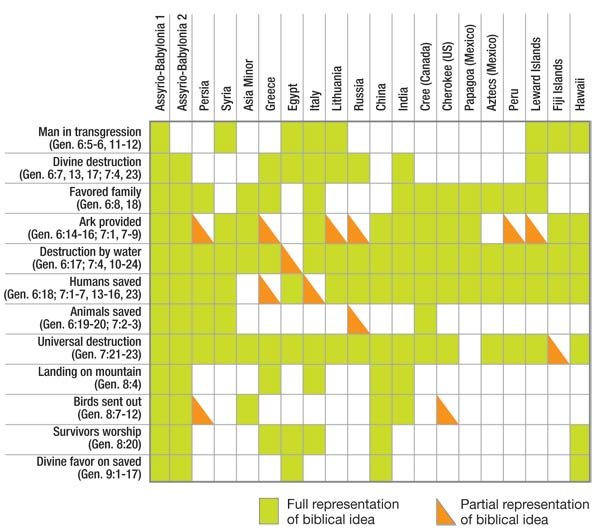 Visit Flood Legends to read more accounts of the Flood from around the world.

Previous Article Sauropods Next Article Depicting the Ark—A Sign of the Times?

Dr. Monty White earned his BSc degree in chemistry and his Ph.D. in gas kinetics from the University of Wales, Aberystwyth. Dr. White is now the CEO of Answers in Genesis-UK/Europe and has traveled extensively throughout Europe lecturing on creationists’ views of origins.