Why Teaching the Idea of Evolution Accurately Is So Important 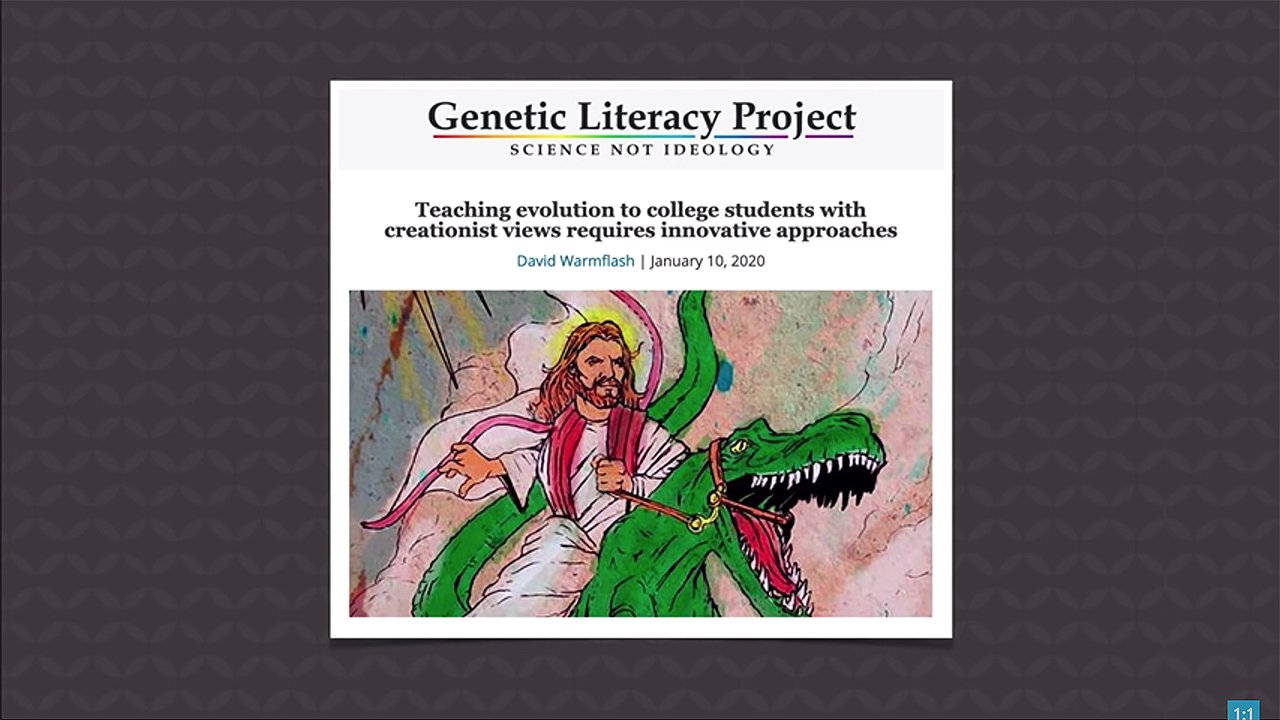 Now that might not be a blog title you would ever expect to see from Ken Ham! But a recently republished article on an evolutionary education site reminded me of the importance of Christians accurately teaching evolutionary ideas to their children, along with the reasons evolution and the Bible are not compatible. Let me explain.

“Major Misconceptions . . . [About] the Major Points of Evolution”

The article was all about how professors at secular colleges work to try to turn creationist students into evolutionists. One of their big points was,

Recognizing that there are sizable numbers of creationist-minded students on college campuses, the teams in Arizona and New York have cited studies showing that such students typically hold major misconceptions concerning the nature of science, as well as the specifics of Darwin’s theory of natural selection and the major points of evolution that have developed since Darwin’s time. Examples of a misconception include not realizing that the term ‘theory’ conveys a very high level of certainty in science. More generally, students often don’t have a grasp of the scientific method, and therefore fall prey to fallacies that creationists promote. (emphasis added)

According to the article, these misconceptions, as they are corrected, can then be used as a platform to help students open to evolution. Of course, we agree that people should be taught accurately about what the idea of evolution is and isn’t. For example, evolution is not a theory. Furthermore, we want students to understand what science is and isn’t.

Young people who haven’t been accurately taught what evolutionists believe, what the idea of evolution actually is, and how to understand some of the basics of science may fall prey to these arguments. For example, I often see examples of natural selection presented as proof of evolution. The argument goes something like this: “Look, we observe change in this species. This particular gene is more common than it was generations ago. Therefore, there’s been change, and therefore evolution.” Technically, this is what’s called a bait-and-switch fallacy.

Change within a kind is not the same thing as evolution. These small changes are based on genetic information that was already present in the species’ DNA—nothing new was added.

Oh, and students need to understand that the idea of evolution is not only not a theory, but rather a belief: It’s a religion. See an article we previously published on our website dealing with this issue: Evolution Is a Religion.

If students don’t understand what evolution actually is, and don’t have a good understanding of science, they may be convinced by the bait-and-switch evolutionists often employ.

Of course, teaching evolution accurately must go hand-in-hand with teaching the biblical truth of origins. After all, truth, honesty, and so forth are biblical concepts. We must ensure young people understand biblical creation and how we can use the Bible’s history as the framework for viewing the world. Thoroughly knowing the truth makes it easier to spot and resist the lies of the world. And it helps young people become better critical thinkers and better scientists!

Are Faith and Evolution Compatible?

Another major point in the article was that some professors find it helpful to highlight Christian scientists and leaders who are also evolutionists. This strategy is used in an effort to show students that faith and evolution are compatible, at least according to some Christians.

We should always compare anything anyone says against the authority of the Word of God. And when we compare the ideas of evolution and millions of years against the testimony of Scripture, it’s obvious they are not compatible.

Today, there are many Christian leaders and scientists, some of them famous, who mix their religion with humanism and its tenets, like evolution. This is appropriately called “syncretism,” but usually, we denote it as “compromise.” However, just because some Christians believe something doesn’t make it right (see 2 Peter 2:1). We should always compare anything anyone says against the authority of the Word of God. And when we compare the ideas of evolution and millions of years against the testimony of Scripture, it’s obvious they are not compatible.

It’s vital we teach young people in detail why millions of years and evolution are not compatible with Scripture. Not only will this equip them to stand strong against secular arguments, but it highlights who our ultimate authority is: God and his Word. We don’t want our children having any other ultimate authority!

Teach Evolution “Warts and All”

Of course, that doesn’t mean you saturate your children with evolutionary ideas—the world does enough of that! But it does mean you accurately portray evolution and take advantage of natural teaching opportunities that come from the prevalence of evolutionary ideas in our culture. Take these opportunities to show with honesty what evolutionists believe and then point your children to the truth of God’s Word and how science confirms the Bible.

If you want to learn the best way to teach your children about origins, bring them to the Creation Museum. The new exhibits we recently opened powerfully teach people young and old how to understand the origins issue correctly!

This item was discussed today on Answers News with cohosts Avery Foley and Bodie Hodge, along with frequent quest Roger Patterson. Answers News is our weekly news program filmed live before a studio audience here at the Creation Museum and broadcast on my Facebook page and the Answers in Genesis Facebook page. We also covered the following topics:

Watch the entire episode of Answers News for January 20, 2019.