Seabird Study Said to Solve the Evolutionary Mystery of Flightlessness

Evolutionary scientists have long puzzled about how penguins evolved their flightlessness and exceptional diving skills. A biomechanical study of another bird—one that dives well but also flies—presumably sheds light on this evolutionary sequence of events.

An Aberdeen University team measured the actual energy expenditure of the thick-billed murre (pronounced mər; scientific name Uria lomvia) while flying and diving. This seabird, known in Britain as Brunnich’s guillemot (pronounced ˈgiləˌmät), swims and dives better than it flies. But after a somewhat awkward takeoff, murres can fly 75 miles per hour despite their stubby wings. Using their wings in the same way penguins do, they routinely dive over 330 feet but can even go twice that depth to find fish, squid, and crustaceans.1 Penguins are unable to fly at all but dive much deeper, to depths of 1,850 feet. Both birds propel themselves downward with powerful wing motions that modify flight principles for aquatic locomotion.

Researchers lassoed murres in northern Canada and injected them with tracer molecules to track energy usage as they rested, flew, and maneuvered in the water. They also fit the murres with sensors to track the depth of their dives as well as the time spent in air, on land, and under water.

The murres’ per minute energy expenditure during flight is the highest known for any bird, 31 times its energy usage at rest. This figure is even higher than the bar-headed goose that flies over the Himalaya Mountains. Most vertebrates only push their energy expenditure to 25 times their resting rate during vigorous activity. Murres’ wings are short, so “They beat their wings really, really fast, and they're horrible at landing,” says Kyle Elliott, lead author of the PNAS paper. “We were able to show that flight costs were much greater than expected . . . [and] demonstrate the cost of not being flightless.”2 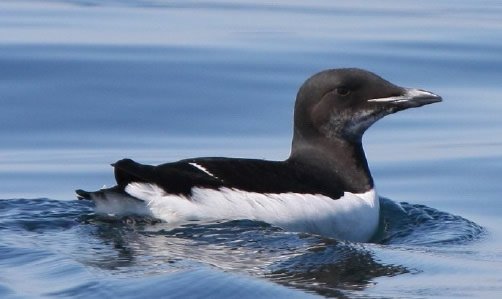 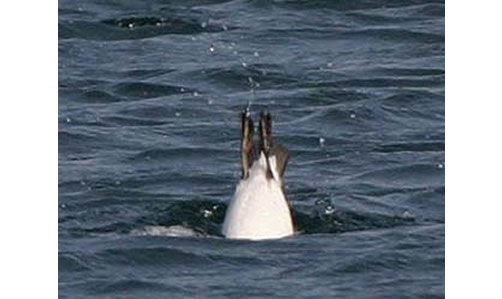 The thick-billed murre is one of the deepest-diving seabirds, but it doesn’t approach the depth reached by the penguin. Yet unlike penguins, murres can fly. Murres usually surface dive, but they can also fly above the water and crash dive.

Longer wings would make deep diving difficult for murres, but short wings make good flippers. Thanks to those short wings, murres can dive deep with a fairly low energy cost. Penguins, which have stubbier wings and dive to much greater depths, have an even lower energy cost for diving than the murres. “Bottom line,” Elliott says, “is that good flippers don’t fly very well.”

The purpose of this investigation was to gain support for the evolutionary hypothesis that flightlessness, thought to have evolved independently at least five times, evolved in seabirds because “animals moving between different media face tradeoffs between maximizing function in one medium relative to the other.”3 Or, more simply put, the team hoped to show that evolving seabirds lost their ability to fly because “good flippers don’t fly very well.”

Murres, able to fly and to execute penguin-like wing-propelled dives, were the focus of the study because researchers believe their performance provides a living model of the penguin’s evolutionary past. Coauthor John Speakman explains:

Like many people, I wondered why on earth they [penguins] lost the ability to fly. It's great to be part of the team that has collected the data that resolves this issue. Our findings for the energy expended when diving and swimming by guillemots fit exactly into the predictions of the biomechanical model.

The lack of flight in penguins has been an enigma because it leads to some seemingly poorly adapted behaviour. Emperor penguins, for example, walk up to 60km between their rookeries and the sea—a journey taking several days that could be covered in a few hours if they were able to fly. Also, many penguins are targets of predators such as leopard seals, at the points where they enter the ocean. This problem could be easily avoided if penguins could just fly over the top of the predators.

However applying the [new] theory to penguins, their loss of flight may have been due to the tradeoffs in maximizing wing function in water versus wing function in air. As penguins evolved, their wings became more and more adapted to swimming and diving in the oceans where they catch their food— making this part of their lives very energy efficient.

However at the same time the energy required for flying became greater and greater for the penguin. At some point it simply became impossible to sustain the very high energy costs of flight and the birds became flightless. Presumably the efficiency benefits when feeding offset the inefficiency of having to walk everywhere when they were on land. Our studies of guillemots have now shown that this biomechanical theory is very likely to be correct.

Guillemots resemble penguins in their diving and swimming behaviour, but differ in that they are still able to fly. In many respects they are like a modern equivalent to the ancient ancestors of penguins before they lost the ability to fly.

But of course murres (guillemots) are not penguins. In fact, they belong to different families, and DNA analysis suggests they are not related. So how is it evolutionary scientists think murres explain the evolution of flightlessness in penguins? And why do evolutionists think penguins lost ability to fly? How do they “know” penguins ever had it to lose?

The evolutionary notion that primitive penguins were able to fly is based on the belief that flying birds evolved and then diverged into several flightless lineages. Penguins are well-designed for the impressively deep dives they make. For instance, penguins have sturdy bones to support wing muscles making not only a vigorous down-stroke but also a powerful up-stroke, important for propelling the bird down to the great depths to which a penguin dives.4 (In flying birds, the up-stroke prepares the wing for the next down-stroke but does not have to be particularly powerful.) 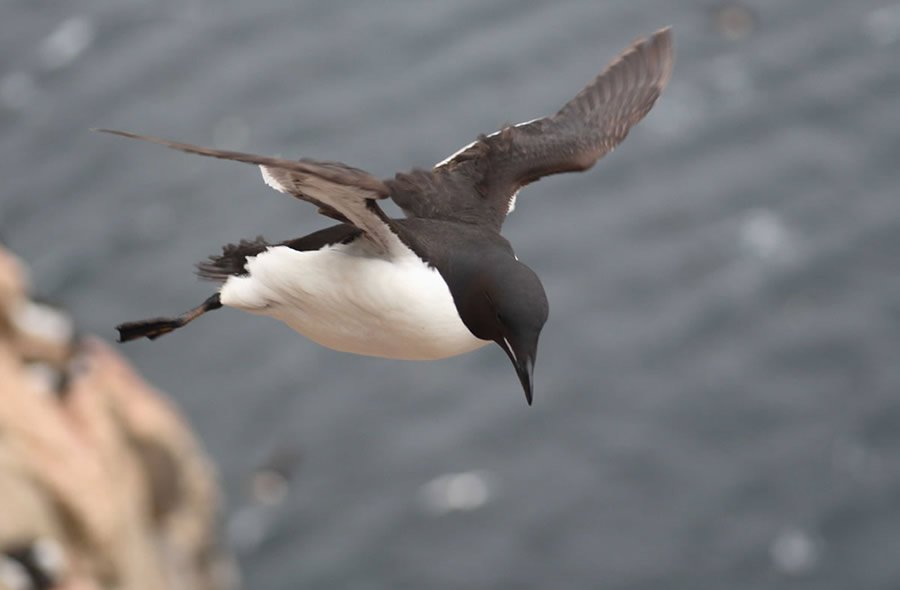 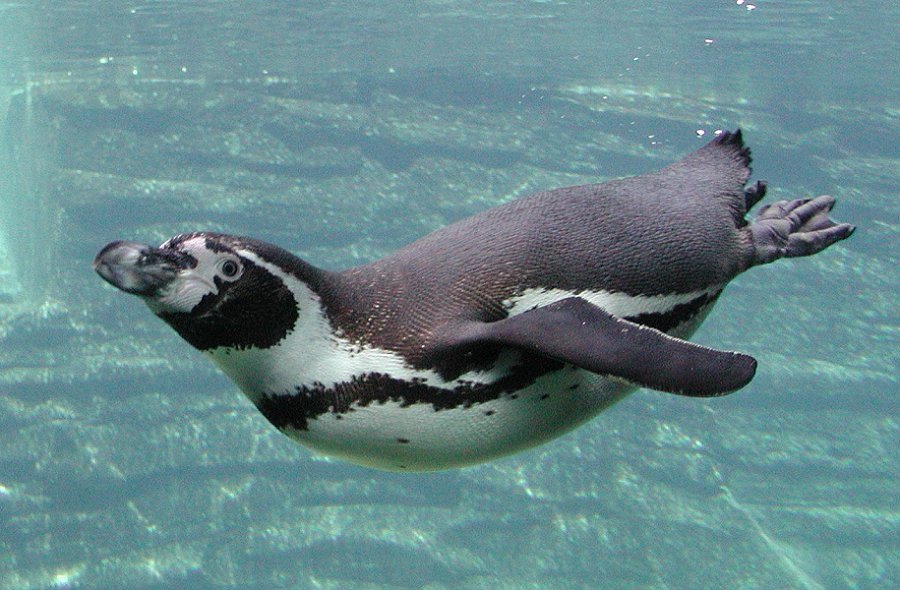 Image by Laurens~commonswiki, via Wikimedia Commons.

The thick-billed murre must expend an enormous amount of energy in order to fly because its wings are short, but those stubby wings are great for diving. With even shorter wings that further minimize resistance in water, however, the penguin is able to reach much greater depths.

The most notable feature distinguishing flightless penguin bones from the bones of flying birds is their greater bone density. The article in the Daily Mail (linked above) asserts that penguins once flew, as proven by the fact that “Penguin bone used to be hollow.” However, the “oldest” known penguins in the fossil record, reckoned to be 61–62 million years old by evolutionists, are the Waimanu species. Analysis of these Paleocene (early Tertiary) penguins reveals “solid (non-pneumatic) bones,” not hollow ones.5

So where does the notion that primitive penguins had hollow bones come from? Not the fossil record.

This study reveals how the thick-billed murre’s design pushes the envelope of possibilities to “approach the functional boundary between flight and nonflight.”6 The researchers write, “These results strongly support the hypothesis that function constrains form in diving birds, and that optimizing wing shape and form for wing-propelled diving leads to such high flight costs that flying ceases to be an option in larger wing-propelled diving seabirds, including penguins.”7

Yet this fact just demonstrates a great design—an ideal “form” for a diving, flying seabird—and confirms nothing about the evolutionary path of any bird, let alone the flightless penguin.

God created birds on the fifth day of Creation week about 6,000 years ago. They reproduced “after their kinds” as the Bible describes, only varying within their created kinds. Biology does not demonstrate the evolution of flight or flightlessness or the evolution of any kind of creature into a different kind.

Previous Article Chimp-Human DNA Similarity: What Does It Really Mean? Next Paper Mammoth Questions: Of Blood, Biological Antifreeze, and Clones