“Creator of Species: How what lives on us and in us drives evolution” (New Scientist cover, 14 January 2013)

The cover art for the January 12 issue of New Scientist describes a rather unpopular view of evolution that has been periodically proposed by some evolutionary scientists. According to Richard Jefferson, who began promoting it in the 1980s, it can best be described as the “Bugs R Us” theory. This hologenomic theory of evolution proposes that natural selection acts not on individual organisms but on “holobiontic” units consisting of individuals and all their associated microorganisms.

As scientists such as Vanderbilt University’s Seth Bordenstein explained in his August 2012 article, “Speciation by Symbiosis,”1 the theory is an effort to explain the dynamics of speciation by viewing organisms and the microbes in their immediate environment as if they were one evolving organism. Together, they are known as a holobiont—“a collective entity formed by symbionts”—and their combined genomes are therefore termed a hologenome. 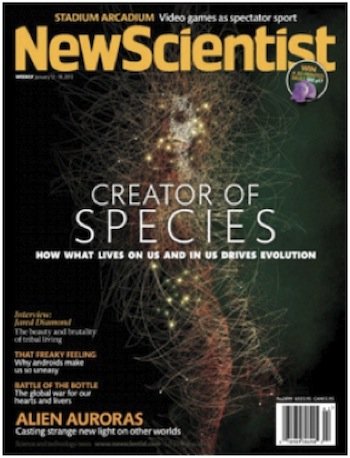 The cover of the 14 January 2013 edition of New Scientist graphically suggests the concept of the “hologenomic” engine of evolution. The hologenome is an organism in company with its entire microbiome. Some scientists suggest the forces of natural selection act not on the single organism but on the hologenome. The hologenome, they propose, “evolves” as if it were a single organism to produce new species. As one possible mechanism of speciation, the “hologenomic” idea is consistent—not with molecules-to-man evolution—but rather with a biblical understanding of the vital roles for which God originally created microbes along with the physical world and all kinds of living things in it. Image credit: New Scientist 2899 (14 January 2013)

This proposed mechanism for speciation does not suggest that microbes contribute genetic information to the actual genomes of the organisms with which they coexist. Instead, proponents suggest considering all the organisms, including microbes, that coexist together to be the “performance unit” on which natural selection acts.

For evidence, proponents point to Eugene Rosenberg’s discovery that Vibrio infected coral—which normally receive a supply of food from photosynthetic algae that live symbiotically on them—managed to recover from the bacterial infection that devastated their algae symbionts. Rosenberg believes the coral recovered without any detectable change in the coral or the bacteria because other microorganisms in the biome killed off the Vibrio bacteria.

Probably the most obvious example to support the hologenomic view would be the symbiotic role of gut flora—at least if it could be shown to lead to speciation. A 2011 study showed that gut flora were essential to the proper brain development of mice.2

Could symbiosis with microbes lead to speciation? Bordenstein showed that termites treated with an antibiotic to kill the microbes living in their digestive tracts reproduced poorly. Presumably, the treated termites became malnourished without the gut bacteria to assist in digestion, decreasing their reproductive fitness.

One of the greatest problems with hologenomic theory is that some mechanism by which an organism’s microbiome can be inherited must be identified. Bordenstein has experimented with bacteria inherited as parasites living in the cytoplasm of wasp cells. He believes variations in these cytoplasmic travelers could lead to speciation, yet hologenomic theory still remains controversial.3

An experiment actually demonstrating a clear change in mating habits related to microbial association was published in 2010.4 Some fruit fly larvae were raised on molasses and some on starch. Flies so raised apparently developed different populations of gut microbes. Within one generation, the molasses flies and the starch flies spurned one another as mates. They continued to do so for 37 generations. Such behavior is a form of reproductive isolation, which is an important element in the formation of new species. Yet an antibiotic treatment killing the microbes eliminated the mating preference of the populations and therefore the basis for eventual speciation. Scientists do not have a clear and uniform definition of “species,” but most definitions involve the ability to mate. Since antibiotics removed the barrier to mating, scientists infer that the microbial part of the fruit flies’ hologenomes was responsible for the reproductive isolation that, in theory, would have eventually led to new species of fruit flies.

“Fast-evolving microbes” could enable large organisms that “can only evolve slowly” to adapt rapidly and produce new species without any actual genomic changes in the larger organism.

Jefferson points out that “fast-evolving microbes” could enable large organisms that “can only evolve slowly” to adapt rapidly and produce new species without any actual genomic changes in the larger organism. Other evolutionary biologists disagree. Scott Gilbert, for instance, commented, “I don’t think we have any evidence yet that there has been speciation caused by microbes. . . . I’m not willing to go that far yet.” Nevertheless, he agrees that “symbionts are capable of giving us selectable variation.” University of Chicago’s Jerry Coyne is also skeptical that speciation by symbiosis is a significant mechanism, noting, “I know of very, very few cases in which endosymbionts cause speciation, and a ton of cases in which changes in [host] genes do, and in which those genes have been mapped.”

Whether the response of the “hologenome” to the pressures of natural selection is a significant mechanism of speciation remains to be proven. Speciation, which is a form of variation within created kinds, certainly can occur quite rapidly. This is not a huge surprise, of course, as organisms clearly are designed to vary within their kinds. It may well be that such microbial influences, perhaps even through epigenetic mechanisms, contributed to the great biodiversity produced in a short time from animals preserved on Noah’s Ark. But speciation by this or any other mechanisms is not evidence for the evolution of one kind of organism into new and more complex kinds of organisms.

God originally created a perfect world in which microbes without a doubt fulfilled their proper roles in their proper niches, helping the environment and the other living things God created. Only after sin’s curse entered our world did the ordinary processes by which microbes vary (without evolving into new kinds of organisms) lead some to become harmful. Studies like those cited here call our attention to just a few of the important roles microbes—most of which are still harmless—fulfill in the world God created.

Previous Article Scars of Evolution or of a Sin-Cursed World? Next Article Oklahoma House Attempts to Protect Students’ Freedoms