How a Multitude of Homing Pigeons Vanished

How 60,000 homing pigeons got lost when something disturbed the sounds of silence.

It’s a modern mystery: how did 60,000 homing pigeons get lost between France and England on June 29, 1997, during the race commemorating the hundredth anniversary of the Royal Pigeon Racing Association? Unraveling the cause of this bizarre event, Jonathan Hagstrum of the U.S. Geological Survey may have finally filled in the pieces to the more ancient question of how these remarkable birds normally find their way home from distant unfamiliar places in all weather, day or night, in the first place. 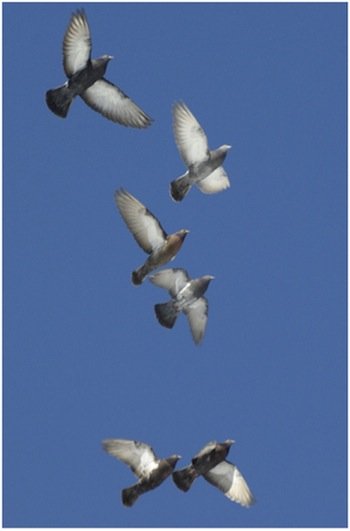 Homing pigeons have been accomplishing amazing feats for thousands of years. Despite their remarkable abilities, over 60,000 got lost crossing the English Channel in 1997. What happened? Geophysicist Jonathan Hagstrum may have finally homed in on the answer. Image by Mill56/Flickr/Creative Commons, via Science.1

Homing pigeons with their cryptic inborn GPS systems have been reliably delivering messages for at least three millennia. Pigeons announced the winners of ancient Olympiads. They delivered military messages for Genghis Khan and were the first to reach England with the outcome of the Battle of Waterloo. They’ve brought home the mail in war and peace. Many were awarded medals for distinguished service in World Wars One and Two.2 (No less amazing, of course, are the enormous migratory feats of other birds, but homing pigeons are easier to study because they travel on cue and not in response to the seasons.)

And while “the magnetic sense of pigeons provides an excellent compass for orientation,” writes Hagstrum, “the geomagnetic field makes a poor map.”

Homing pigeons likely rely on a number of sensory cues to find their way home. While vision may be valuable locally, birds with frosted contact lenses manage to arrive after long trips to within 500 meters of their destination, so sight doesn’t seem to be the key.3 And while “the magnetic sense of pigeons provides an excellent compass for orientation,” writes Hagstrum, “the geomagnetic field makes a poor map.”4

The June 1997 pigeon disaster was one of four pigeon races disrupted in 1997 and 1998 in Europe and the northeastern United States. The only common element, as Hagstrum reported back in the year 2000, was the intersection of the racecourses with the path of an accelerating Concorde supersonic transport.5 This finding supported the idea that pigeons don’t achieve their precision long-distance navigation through reliance on vision or the earth’s magnetic field, since sonic booms disrupt neither. Yet the question remained: how do sonic booms disturb the birds’ natural abilities?

Hagstrum said, “When I realized the birds in that race were on the same flight path as the Concorde, I knew it had to be infrasound.” Infrasound is extremely low frequency sound generated by deep ocean waves. These waves cause tiny vibrations of planetary surfaces and atmosphere, called microseisms and microbaroms, respectively. Because of variations in terrain, infrasonic characteristics can form a map of the landscape.

Hagstrum’s latest study, published 15 February 2013 in the Journal of Experimental Biology, sorted through data on pigeon flights in upstate New York between 1968 and 1987 and confirmed that sonic boom disruption of the “sounds of silence” was likely responsible for the 1997 loss of over 60,000 trained birds. Moreover, his study represents a major piece for the how-birds-navigate puzzle.

The New York birds were part of a Cornell University experimental program. For nearly two decades researchers recorded that birds released from one of three standard sites—Jersey Hill—generally failed to make it home. Those from the other sites could find their way. Only once in those two decades did the Jersey Hill birds make it home to Cornell: on August 13, 1969. Meteorological records demonstrated that the area on that day experienced a temperature inversion. Hagstrum believes, based on acoustic modeling, that the terrain of the path between Jersey Hill and Cornell normally creates a “sound shadow,” obscuring the home loft by directing the infrasonic signals associated with it high into the atmosphere. On the one good day, differing atmospheric conditions would have made the infrasonic signals detectable to birds from Jersey Hill.6

Hagstrum believes that infrasonic signals from a home loft normally act like a homing beacon for birds to get their bearings as they orient using other signals such as the sun or stars, the earth’s magnetic field, and visual or olfactory clues.7 Ill-timed sonic booms, earthquakes, and terrain that coincidentally misdirects the sound waves as they propagate through the air all have the potential to disrupt infrasonic signals that normally bring these birds home.

You may listen to these subtle sounds yourself in amplified recordings from the University of Hawaii Infrasound Laboratory.8 As you listen, marvel at the ways God designed for birds to find their way using an earthward-directed GPS-like system for more than 6,000 years since creation.