How Can We Be Sure Which Books Belong in Our Bible?

There are 66 books in the Bible. Taken together, these are known as the canon of divine revelation.1

They were written over a period of around two thousand years by about forty different writers. However, just one author inspired them—God. But how can we be sure that these 66 books are the only inspired Scriptures, no more or less?

The ancient Hebrews had a clearly defined body of Scriptures. The Word of God was recognized from the very beginning, and there was no doubt which books belonged. The Jews did not arrange their books in the same way as Christians do, however, and some books were combined. But the content was the same. No more or less.

Evidence within the Bible indicates that most of the books of the Old Testament were written at the time of the events they record, and they were accepted as God’s Word at the time the words were given. Historical records outside the Bible reinforce this conclusion.

Jesus verified that the Old Testament writings were always Scripture when He quoted from the Old Testament and claimed, “It is written” (Matthew 4:4, 7, 10) and “Scripture cannot be broken” (John 10:35, ESV). Paul had no doubt that the Jews were “entrusted with the very words [the oracles] of God” (Romans 3:2, NIV). Modern-day theologian Carl F. H. Henry wisely concluded, “The church inherited the Old Testament, and Jesus defended, encouraged and exemplified faithful submission to these writings as an inspired canon.”2

A famous Jewish council met at Jamnia around AD 100. Its purpose was not, as is often erroneously suggested, to decide which books would be included among the sacred writings for the Jews. The purpose was which books were already accepted.3 The council had access to the same Old Testament canon that we have today.

Evidence within the Bible supports the conclusion that most of the New Testament was written by AD 70, while the writings of John came a little later.4 Most of the books name the author, and all the books give other helpful clues, which the book of Acts helps us to date more accurately.

What About the Apocrypha?

The 11 to 16 books of the Apocrypha were written in the 400 years between the close of the Old Testament and the beginning of the New. While the Roman Catholic and Greek Orthodox churches treat some of these books as Scripture, Protestant Christians never have. Why is this?

Several statements in the Bible indicate that the New Testament would be written by apostles or approved by them. Peter called Paul’s writings “scripture” (2 Peter 3:16), and Paul said he and other apostles spoke “the word of God” (1 Thessalonians 2:13).

Before the close of the first century, Clement of Rome either quoted from or referred to more than half the New Testament books and called them “scripture.” By AD 180, Irenaeus of Lyons quoted over 1,000 passages from all but a handful of the New Testament books, calling them “holy Scriptures” given by the Holy Spirit. At the same time, Tertullian from North Africa referred to the “New Testament” and expounded on most of it. Origen from Alexandria in AD 240 referred to our 27 books as Scripture, and Athanasius used the same list in AD 367.5 They used no other books in the same way.

It is certain that by the early second century, the four Gospels (and never any others) and the thirteen letters of Paul were accepted by the churches across the Roman Empire without question.

Up to the year AD 180, all our New Testament books (with the single exception of 2 Peter) are found in either direct quotations or allusions in the writings of the leaders of the churches. By this year, a few churches hesitated over James, Jude, 2 and 3 John, 2 Peter, Hebrews, and Revelation; but all the rest were universally accepted. The church leaders never used noncanonical books with the same authority as the New Testament books. 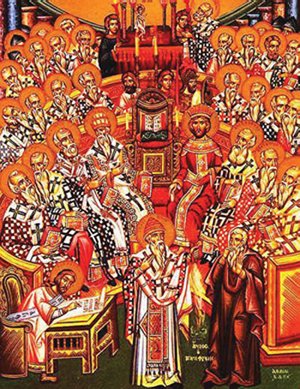 An icon depicting the Council of Nicaea, which is inappropriately thought to be where church leaders decided which books of the Bible were part of Scripture.

The Muratorian Canon, originally compiled around AD 150, is our earliest documented evidence of a body of books that was identified as the New Testament canon of Scripture. It contains all but four of our New Testament books, though the only surviving copy from the eighth century is in poor condition and is missing parts. No council was ever called to debate the contents of the canon—it was almost universally recognized for what it was, the Word of God.

Why did it take so long for the list of the New Testament canon to show up?

Even though no one church or leader had authority to dictate to the others, it is amazing that close to AD 150 the Muratorian Canon could list all but four of our New Testament books.

Many deceivers wrote false gospels and letters, pretending that they were written by the apostles. But the early church leaders dismissed them as counterfeit and unreliable.7 The false gospels and letters betrayed themselves by their late date of composition—well beyond the time of the apostles—and by their teaching, which clearly conflicted with the canonical books and the accepted doctrines of the churches.

History reinforces our confidence that God gave us His entire Word and preserved it for us, as He said He would. We have precisely the books that God planned from eternity—66 books in all.

How Do We Know Each Book of the Bible is Inspired?

The church recognizes that God inspired the Bible’s 66 books. God supernaturally chose the Bible’s human authors, and He confirmed their authenticity through fulfilled prophecy or miracles. With more than 40 authors from over 19 backgrounds, the Bible’s message is consistent and without contradiction or error.

The Jews accepted books written by Moses and the prophets as part of their canon (now called the Old Testament). In the same way, Christ’s messengers were responsible for the books that are included in the New Testament.

Additionally, we would expect a book that came from God to meet certain criteria, including historical, prophetic, and scientific accuracy; a tone of authority; and a life-changing message.

Many modern scientific facts can be found in the Bible or deduced from it: the earth is round (Isaiah 40:22), the stars are countless (Genesis 15:5), living things reproduce after their kinds (Genesis 1:24–25), and there are “paths” in the oceans (Psalm 8:8).

Concerning prophetic accuracy, Old Testament passages give more than 50 prophecies of the birth, life, death, and resurrection of Jesus Christ; and every prophecy (written over 400 years before His birth) came true.

The Bible’s books also claim to be God’s words in several verses, including 2 Timothy 3:16–17 and 2 Peter 1:21. In numerous places, the author says, “thus says the Lord,” laying claim to divine authorship.

The Bible’s message contains life-changing power. It convicts men of sin, brings them to the end of themselves, and then transforms them into new creatures by the power of the Holy Spirit. No other message has done this for mankind.