Geologic Evidences for the Genesis Flood

Part I: An Overview

This is the beginning of a series of articles explaining the evidences from geology for the Genesis Flood. Each article will discuss one evidence. This first article simply overviews all the evidences discussed in upcoming issues.

Have you ever been tongue-tied when asked to provide geologic evidence that the Genesis Flood really did occur, just as the Bible describes? Then what follows is for you. 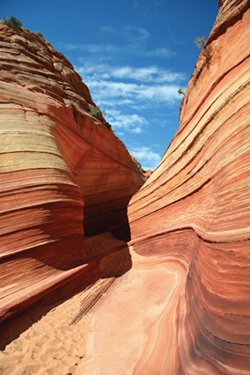 This article provides an overview of six geologic evidences for the Genesis Flood, and in a series of six articles to follow, each geologic evidence will be elaborated upon. Together, they will provide you with ammunition and a teaching tool for you and others.

Why is it that many people, including many Christians, can’t see the geologic evidence for the Genesis Flood? It is usually because they have bought into the evolutionary idea that “the present is the key to the past.” They are convinced that, because today’s geological processes are so slow, the rock strata and the earth’s rock layers took millions of years to form.

Why is it that many people can’t see the geologic evidence for the Genesis Flood? Because many have bought into the evolutionary idea that “the present is the key to the past.”

However, if the Genesis Flood really occurred, what evidence would we look for? We read in Genesis 7 and 8 that “the fountains of the great deep” were broken up and poured out water from inside the earth for 150 days (5 months). Plus it rained torrentially and globally for 40 days and nights (“the floodgates [or windows of heaven] were opened”). No wonder all the high hills and the mountains were covered, meaning the earth was covered by a global ocean (“the world that then was, being overflowed with water, perished,” 2 Peter 3:6). All air-breathing life on the land was swept away and perished.

So what evidence would we look for? Wouldn’t we expect to find billions of dead plants and animals buried and fossilized in sand, mud, and lime that were deposited rapidly by water in rock layers all over the earth? Of course! That’s exactly what we find. Indeed, based on the description of the Flood in Genesis 7–8, there are six main geologic evidences that testify to the Genesis Flood.*

Six Evidences for the Genesis Flood

Evidence 1. Fossils of sea creatures high above sea level due to the ocean waters having flooded over the continents

We find fossils of sea creatures in rock layers that cover all the continents. For example, most of the rock layers in the walls of Grand Canyon (more than a mile above sea level) contain marine fossils. Fossilized shellfish are even found in the Himalayas.

We find extensive fossil “graveyards” and exquisitely preserved fossils. For example, billions of nautiloid fossils are found in a layer within the Redwall Limestone of Grand Canyon. This layer was deposited catastrophically by a massive flow of sediment (mostly lime sand). The chalk and coal beds of Europe and the United States, and the fish, ichthyosaurs, insects, and other fossils all around the world, testify of catastrophic destruction and burial.

We find rock layers that can be traced all the way across continents—even between continents—and physical features in those strata indicate they were deposited rapidly. For example, the Tapeats Sandstone and Redwall Limestone of Grand Canyon can be traced across the entire United States, up into Canada, and even across the Atlantic Ocean to England. The chalk beds of England (the white cliffs of Dover) can be traced across Europe into the Middle East and are also found in the Midwest of the United States and in Western Australia. Inclined (sloping) layers within the Coconino Sandstone of Grand Canyon are testimony to 10,000 cubic miles of sand being deposited by huge water currents within days.

We find that the sediments in those widespread, rapidly deposited rock layers had to be eroded from distant sources and carried long distances by fast-moving water. For example, the sand for the Coconino Sandstone of Grand Canyon (Arizona) had to be eroded and transported from the northern portion of what is now the United States and Canada. Furthermore, water current indicators (such as ripple marks) preserved in rock layers show that for “300 million years” water currents were consistently flowing from northeast to southwest across all of North and South America, which, of course, is only possible over weeks during a global flood.

Evidence 5. Rapid or no erosion between strata

We find evidence of rapid erosion, or even of no erosion, between rock layers. Flat, knife-edge boundaries between rock layers indicate continuous deposition of one layer after another, with no time for erosion. For example, there is no evidence of any “missing” millions of years (of erosion) in the flat boundary between two well-known layers of Grand Canyon—the Coconino Sandstone and the Hermit Formation. Another impressive example of flat boundaries at Grand Canyon is the Redwall Limestone and the strata beneath it.

Evidence 6. Many strata laid down in rapid succession

Rocks do not normally bend; they break because they are hard and brittle. But in many places we find whole sequences of strata that were bent without fracturing, indicating that all the rock layers were rapidly deposited and folded while still wet and pliable before final hardening. For example, the Tapeats Sandstone in Grand Canyon is folded at a right angle (90°) without evidence of breaking. Yet this folding could only have occurred after the rest of the layers had been deposited, supposedly over “480 million years,” while the Tapeats Sandstone remained wet and pliable.

Therefore, we must believe what Christ told us, rather than the ideas of fallible scientists who weren’t there to see what happened in the earth’s past. Thus we shouldn’t be surprised when the geologic evidence in God’s world (rightly understood by asking the right questions) agrees exactly with God’s Word, affirmed by Jesus Christ.

The next article in this geology series will look in detail at the geologic evidence that the ocean waters flooded over the continents, just as described in Genesis 7–8.