Fossils of sea creatures are found in rock layers high above sea level. This is just one more evidence of the truth of God’s Word.

If the Genesis Flood, as described in Genesis 7 and 8, really occurred, what evidence would we expect to find? The previous article in this series gave an overview of the six main geologic evidences for the Genesis Flood. Now let’s take a closer look at evidence number one.

After we read in Genesis 7 that all the high hills and the mountains were covered by water, and all air-breathing life on the land was swept away and perished, the answer to the question above should be obvious. Wouldn’t we expect to find rock layers all over the earth that are filled with billions of dead animals and plants that were rapidly buried and fossilized in sand, mud, and lime? Of course, and that’s exactly what we find.

It is beyond dispute among geologists that on every continent we find fossils of sea creatures in rock layers which today are high above sea level. For example, we find marine fossils in most of the rock layers in Grand Canyon. This includes the topmost layer in the sequence, the Kaibab Limestone exposed at the rim of the canyon, which today is approximately 7,000–8,000 feet (2,130–2,440 m) above sea level.1 Though at the top of the sequence, this limestone must have been deposited beneath ocean waters loaded with lime sediment that swept over northern Arizona (and beyond).

These marine fossils are found haphazardly preserved in this limestone bed. The crinoids, for example, are found with their columnals (disks) totally separated from one another, while in life they are stacked on top of one another to make up their “stems.” Thus, these marine creatures were catastrophically destroyed and buried in this lime sediment. 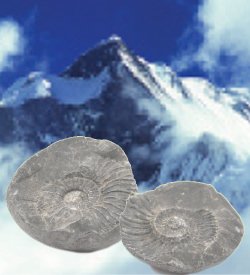 Fossil ammonites (coiled marine cephalopods) like this one are found in limestone beds high in the Himalayas of Nepal. How did marine fossils get thousands of feet above sea level?

We must remember that the rock layers in the Himalayas and other mountain ranges around the globe were deposited during the Flood, well before these mountains were formed. In fact, many of these mountain ranges were pushed up by earth movements to their present high elevations at the end of the Flood. This is recorded in Psalm 104:8, where the Flood waters are described as eroding and retreating down valleys as the mountains rose at the end of the Flood.

There is only one possible explanation for this phenomenon—the ocean waters at some time in the past flooded over the continents.

Could the continents have then sunk below today’s sea level, so that the ocean waters flooded over them?

There had to be two mechanisms for the sea level to rise. First, water was added to the ocean. Second, the ocean floor itself rose.

So there must be another way to explain how the oceans covered the continents. The sea level had to rise, so that the ocean waters then flooded up onto—and over—the continents. What would have caused that to happen?

There had to be, in fact, two mechanisms.

First, if water were added to the ocean, then the sea level would rise.

Scientists are currently monitoring the melting of the polar ice caps because the extra water would cause the sea level to rise and flood coastal communities.

The Bible suggests a source of the extra water. In Genesis 7:11 we read that at the initiation of the Flood all the fountains of the great deep were broken up. In other words, the earth’s crust was split open all around the globe and water apparently burst forth as fountains from inside the earth. We then read in Genesis 7:24–8:2 that these fountains were open for 150 days. No wonder the ocean volume increased so much that the ocean waters flooded over the continents.

Second, if the ocean floor itself rose, it would then have effectively “pushed” up the sea level.

The Bible suggests a source of this rising sea floor: molten rock.

The catastrophic breakup of the earth’s crust, referred to in Genesis 7:11, would not only have released huge volumes of water from inside the earth, but much molten rock.5 The ocean floors would have been effectively replaced by hot lavas. Being less dense than the original ocean floors, these hot lavas would have had an expanded thickness, so the new ocean floors would have effectively risen, raising the sea level by more than 3,500 feet (1,067 m). Because today’s mountains had not yet formed, and it is likely the pre-Flood hills and mountains were nowhere near as high as today’s mountains, a sea level rise of over 3,500 feet would have been sufficient to inundate the pre-Flood continental land surfaces.

Toward the end of the Flood, when the molten rock cooled and the ocean floors sank, the sea level would have fallen and the waters would have drained off the continents into new, deeper ocean basins. As indicated earlier, Psalm 104:8 describes the mountains being raised at the end of the Flood and the Flood waters draining down valleys and off the emerging new land surfaces. This is consistent with much evidence that today’s mountains only very recently rose to their present incredible heights. 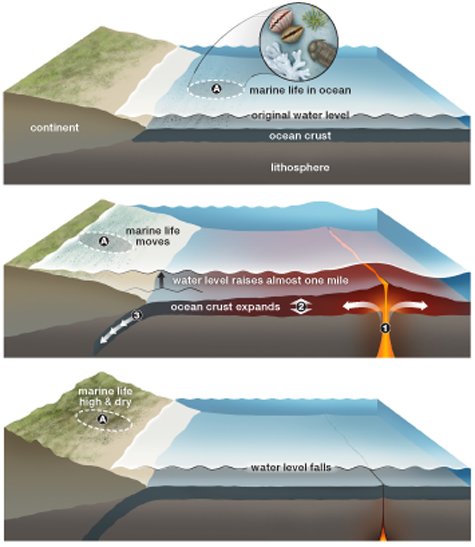 Marine Life Originally Lives in the Ocean (top)
Marine creatures obviously live in the ocean (A). For these creatures to be deposited on the continents, the sea level had to rise.

The Ocean Crust Is Heated and Expands (middle)
(1)During Noah’s Flood molten rock was released from inside the earth and began replacing the original ocean crust. The ocean crust was effectively replaced by hot lavas. (2)Because of the hot molten rock, the ocean crust became less dense and expanded. (3)The molten rock displaced and pushed the original ocean crust below the continent. (A)The sea level rose more than 3,500 feet (1,067 m) and marine creatures were carried onto the continent, buried in sediments, and fossilized.

Marine Life Remains on the Continent (bottom)
Toward the end of the Flood, the ocean crust cooled and the ocean floor sank. As the waters drained off the continents, the sea level would have fallen, leaving marine fossils (A) above sea level on the continents.

We know that the cataclysmic Genesis Flood was an actual event in history because God tells us so in His record, the Bible. Now we can also see persuasive evidences that support what the Bible has so clearly taught all along.

In the next article in this special geology series, we will look in detail at the geologic evidence that plants and animals were rapidly buried by the Flood waters described in Genesis 7–8.