Heart Rhythm Established: Day 28 in the Life of an Unborn Baby

The human embryo begins to show intricate features, including a regular heart rhythm on day 28 of development that points to the careful design of a Creator.

Have you ever seen something so astounding that you almost forget to breathe? That’s how I felt in my university’s developmental biology lab, where I stood watching a tiny, pulsating point of red. With every beat of the chick embryo’s heart, the atmosphere in the lab seemed to throb with the wonder of life. And this was only the heart of a chicken!

How much more astounding is the heart of a human embryo, beating by day 22 after fertilization and settled into a regular rhythm by day 28? Evolutionists and creationists find this stage of development especially interesting because, by day 28, human embryos show features that resemble structures we see in other embryos—like chicks. Evolutionists say these similarities are evidence that humans, chickens, and other vertebrates share a common ancestor. But let’s see how to apply some biblical critical thinking to this claim. To start, we’d better take a closer look at the 28-day-old human embryo.

We’ve already zoomed in to look at the embryo’s heart, complete with its developing chambers. Zooming out, we see a network of arteries branching to distribute blood throughout the tiny, curled body. Though only about the length of a grain of rice, this individual already has a forehead, trunk, and four limb buds, which will soon become arms and legs. Within the head, we can see early structures of the ears and eyes, complete with retinal and lens disks.

The nervous system has differentiated into forebrain, midbrain, and hindbrain regions, along with a hollow tube that will become the baby’s spinal cord.

The nervous system has differentiated into forebrain, midbrain, and hindbrain regions, along with a hollow tube that will become the baby’s spinal cord. Running below this neural tube, a flexible rod called the notochord lends support to the developing body. Eventually, the notochord will give rise to vertebrae and disks. Meanwhile, it plays a crucial role in releasing chemical signals to help guide the development of surrounding tissues.

Continuing downwards, we find a set of accordion-like folds of tissue just below the baby’s head. These folds, known as pharyngeal arches,1 will develop into structures of the jaw and neck. Below them, the embryo’s internal organs are beginning to take shape. We can already see the heart and liver clearly, together with several bulges along the embryo’s innermost tissue layer, the endoderm. These bulges might not look like much now, but they’ll soon develop into the lungs, stomach, pancreas, gallbladder, and intestines.

Extending from the endoderm, the umbilical cord imports oxygenated blood from the placenta and exports waste. Primordial germ cells, which will become sperm or eggs depending on whether the baby is genetically male or female, are already present and migrating towards their future locations in the embryo. The embryo’s comma-shaped body tapers off at the end of the notochord, creating a structure that evolutionary textbooks call a “tail.” 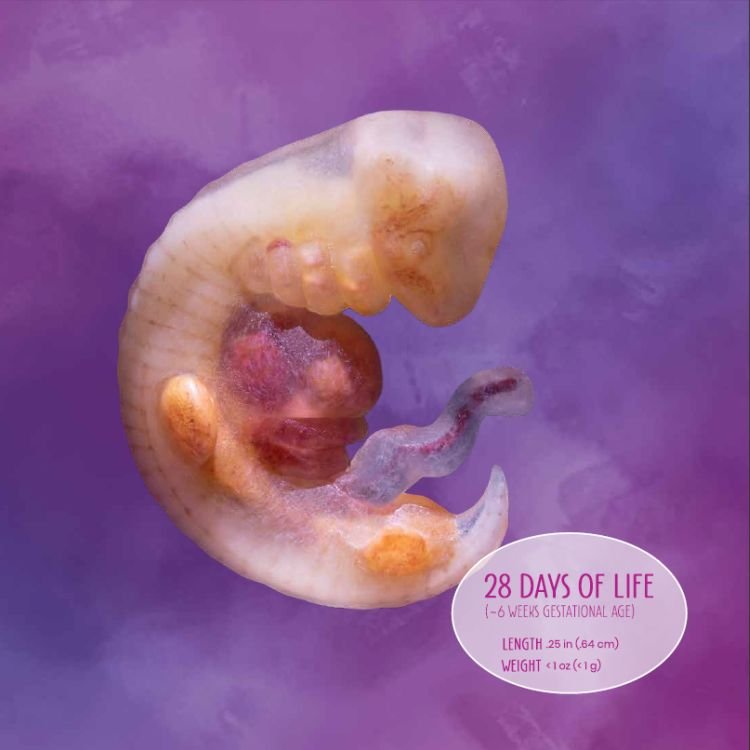 Of course, this “tail” will vanish from view as the lower limb buds develop into legs. Even once the tailbone forms, it will serve not as a tail but as a crucial muscle attachment point for supporting internal organs. So, messages which call the base of an embryo a “tail” are not statements grounded in observable facts but interpretations based on evolutionary assumptions. Yet those interpretations will be presented as facts in textbooks.

To separate facts from interpretations, we can ask, “Which parts of this message are observations we can see in the present, and which parts are assumptions, speculations, and explanations about the unobservable past?” Then, we can ask how a biblical explanation might explain the same observations even better.

Take, for example, the argument that similarities between human and animal embryos provide evidence for evolution. This popular claim has circulated since the 19th-century when biologist Ernst Haeckel famously forged drawings making vertebrate embryos appear more alike than they are. Haeckel incorrectly believed that human embryos re-enact evolution, passing through fish, amphibian, and reptile-like stages.2 Historically, this false teaching has been used to justify untold numbers of abortions as clinicians have counseled women that human embryos are not persons but lumps of cells passing through a “fish” stage of development.

It’s a fact that we see some similarities between embryos. But it’s an interpretation based on evolutionary assumptions that these similarities reflect common ancestry.

Relatedly, textbooks may call vertebrates’ pharyngeal arches “gill slits,” suggesting that humans are evolutionary descendants of fish. But human pharyngeal arches are neither gills nor slits, and they don’t have anything to do with supplying oxygen to the embryo. Labeling these tissue folds “gill slits” anyway is a propaganda technique called association, meant to make humans seem closer to fish than we really are.4 A biblical interpretation of pharyngeal arches is that they’re a good design our Creator could apply to multiple creatures.

So, why does it matter how we interpret these body parts in 28-day-old embryos? Using terms like “gill slits” and “tail” might seem like nothing more than a matter of (rather misleading) semantics. But really, our interpretations can be a matter of life and death. Are we interpreting human beings as fish-like byproducts of unguided evolution or as persons made in the image of God? (Genesis 1:27)

Are we interpreting human beings as fish-like byproducts of unguided evolution or as persons made in the image of God?

If humans evolved apart from a God whose character defines morality, then we can make up our own standards of right and wrong. But we have no foundation to explain why those standards should value every human life if humans are meaningless evolutionary byproducts. In this secular worldview, stopping the heartbeat of a human embryo is no different than stopping the heartbeat of a chicken.

However, when we view human embryos through the lens of God’s infallible Word, we see persons handmade in the image of their Creator, endowed with inherent meaning, value, and dignity. God’s Word reveals humans matter to our Creator so much that, after we separated ourselves from him through sin, he stepped into his creation and became one of us. Jesus took on flesh, becoming a human embryo with a tiny, beating heart. And he later let that heartbeat be stopped, paying sin’s death penalty on behalf of all who hope in him. Now that’s astounding.