A Serious Problem for Homology

The fact is, however, that it has been proved in many cases that homologous structures are not produced by homologous genes! 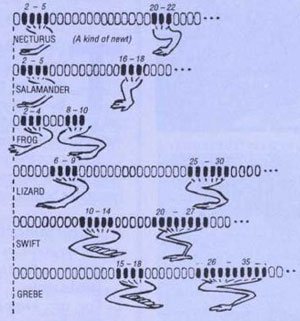 In the vertebrates the embryo is constructed of a large number of segments which can be numbered, starting at the head end. Surely particular segments develop under the control of particular genes. We would reasonably assume the same for any particular structure, such as the front leg. Yet we see in the diagram that in six different vertebrates which allegedly inherited their front legs from a common ancestor, the front legs as well as the rear legs develop from entirely different groups of segments from species to species.

Thus if the front legs (or rear legs) of these different creatures have been inherited from a common ancestor through evolution, we have the incredible idea that the job of producing the legs is, by evolution, passed slowly back and forth from group to group of different genes, which are themselves gradually changing to accomplish this fantastic juggling act.

In his 1971 monograph, Homology, An Unsolved Problem (reference Oxford Biology Reader), Sir Gavin de Beer, one of the truly great embryologist of this century, posed the question for evolutionary theory which still is unanswered:

‘But if it is true that through the genetic code, genes code for enzymes that synthesize proteins which are responsible (in a manner still unknown in embryology) for the differentiation of the various parts in their normal manner, what mechanism can it be that results in the production of homologous organs, the same "patterns", in spite of their not being controlled by the same genes? I asked this question in 1938, and it has not been answered.’