At less than 0.5 cm long, the tiny baby is growing rapidly and has three “layers,” which are the groundwork for further development.

A new mother often realizes she’s expecting by this time (24 days after fertilization), if not before, as she may notice changes in her monthly cycle or pregnancy symptoms and take a pregnancy test. Her body begins producing the hormone hCG at fertilization in increasing amounts every day, and urine pregnancy tests work by detecting this hormone. Nearly all mothers produce enough hCG at this point to produce a positive urine test.

At this point, the baby is still tiny, less than 0.5 cm long, and so is too small to be easily seen on an ultrasound. However, a transvaginal ultrasound may be able to detect the gestational sac the baby is growing in, and perhaps what is colloquially known as the “yolk sac.” This may make you think of the yellow part of a chicken egg, but the embryonic “yolk sac” has a very different function. The yolk of a chicken egg is a single cell, which, if fertilized, will develop into a chicken. The embryonic “yolk sac” provides nutrition and waste removal for the baby before the placenta forms and has an essential role in early blood supply. As the baby develops, most of this structure will become part of the gastrointestinal tract.

Although the child is very small now, he or she is growing rapidly, and many changes are happening every day!

Although the child is very small now, he or she is growing rapidly, and many changes are happening every day! While he or she has not yet developed many of the features we will see quickly appearing in the coming weeks, the body is laying the groundwork for further development. At this point, the baby has three “layers.” The outermost is the ectoderm, which will become the baby’s nervous system and skin. The next layer is the mesoderm, which will become the heart and circulatory system as well as muscle and bone. And the innermost layer, the endoderm, will develop into the other internal organs.1 The cells in each of these layers become progressively more differentiated as development continues. The body has a noticeable head containing the beginnings of the baby’s brain, and a spinal column from which the arm and leg buds will sprout, and a bump below the head contains a beating heart! 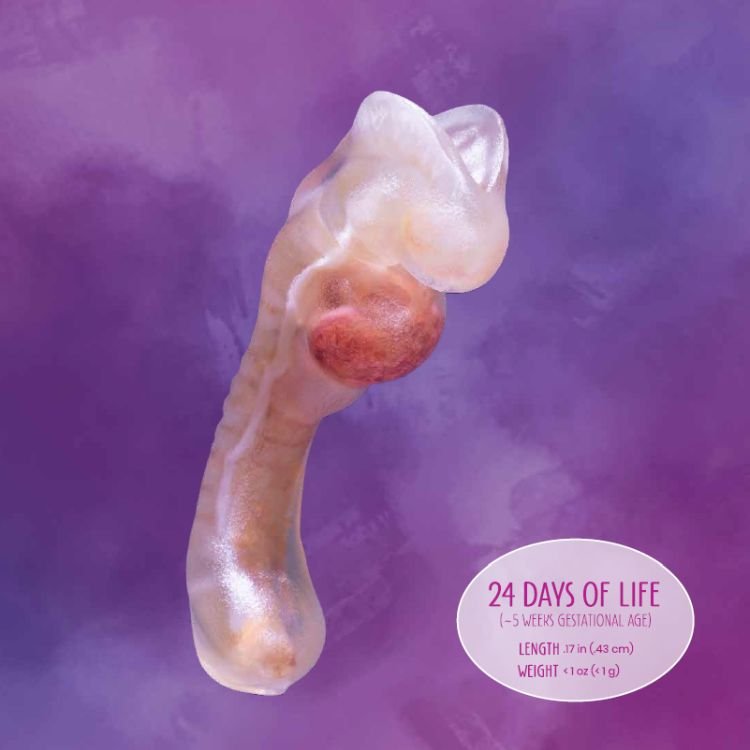 Unfortunately, a mother’s discovery that she is pregnant can be the most dangerous time of a baby’s life if the mother decides she does not want to be pregnant. If she desires, she may take two pills, taken several hours apart, to force her body to miscarry the child.

Because we know that every person is created in the image of God and every human life has value from fertilization, such abortion pills are murder. However, pro-life doctors have figured out a way to reverse the effects of the first pill if a mother realizes what she’s done and wants her baby to live. If the woman comes for help in time, progesterone injections can sometimes save the baby.2

Every stage of development shows the ingenuity of our Creator and his care for the little life that is being knitted together (Psalm 139:13). While it is impossible to tell by looking at the tiny baby whether it is a boy or a girl, many things are already genetically determined, such as the biological sex and even whether the baby will more closely resemble the father or mother! And the Bible says that God already has numbered the days of this precious new individual (Psalm 139:16). While the baby is very small at this stage, he or she is a valuable human being created in the image of God and deserves the same protection, care, and love that we would expect parents to show their newborn.