Creationists and evolutionists both agree: dinosaurs are great tools for teaching the history of the earth. But at the Walking with Dinosaurs show, all you’ll find is unbalanced indoctrination. 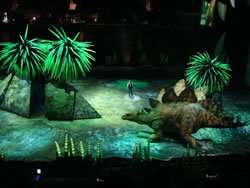 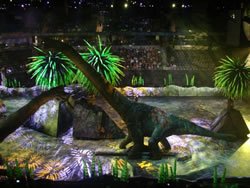 Pictures from Walking with Dinosaurs

Walking with Dinosaurs is much more than a theatrical stage show that is now on a two-year run in large arenas around America. It is a 70-minute lecture on evolution as much as it is a form of entertainment that features large, realistic-looking animatronic dinosaurs.1 That is not too surprising, given that Walking with Dinosaurs was spun off from the evolution-filled BBC TV program of the same name (the British series was eventually shown on American TV—see our review of the TV program).

The stage show we saw last Sunday evening on the campus arena of Northern Kentucky University—which showcased an impressive collection of 12-plus dinosaurs—took up the entire floor of the arena. Overall, it manifested the same commitment to visual quality as the ground-breaking BBC TV series. Children around us shrieked with glee and named the dinosaurs as they came out from behind a huge curtain and paraded in front of us, as puppeteers of a high-tech sort (with no wires, though) manipulated the realistic movements of the huge creatures. Simulated earthquakes and a comet collision also enhanced the show, but the program does suffer from some lulls, especially when the narrator gives the audience an overview of supposed dinosaur-evolution history and how they are still with us today (as birds).

The heavy evolutionary emphasis of Walking with Dinosaurs—including the frequent use of the evolutionary timeline of millions of years—is in direct contrast to what we present in our Creation Museum located just a 20-minute drive west of the arena. Unfortunately, Walking with Dinosaurs is so well crafted that it helps make its scientific claims appear legitimate. Similarly, secular humanists have made comments about the quality of the Creation Museum, upset that the well-done museum might cause visitors to believe the museum’s biblical messages! Apparently, many secular humanists think they should have the monopoly on presenting things in a professional way. However, we proclaim the truth at the Creation Museum, and that is the difference. We submit that evolutionists make a lie look as if it’s true.

Evolution is thus “staged” in more than one sense in Walking with Dinosaurs, as it attempts to wow audiences into a belief that dinosaurs supposedly evolved over a 200-million year timeframe.

What Walking with Dinosaurs Teaches

As the program was about to start, a dad behind us said to his young son, “Two minutes to go, and they will tell you the story of dinosaurs.” He was right—that’s what the show does. The lights were dimmed, and with great musical and lighting fanfare, the host of the show (“Huxley,” a paleontologist) appeared on the floor.

Huxley told us that we would be going back in time, and to switch off all cell phones because it will be “165 million years until cell phone reception” is available. He held up an item representing a fossil of a dinosaur bone and said it took “unimaginable time to produce fossil bones.” This gave the impression that it takes millions of years to produce fossils, which even evolutionists know can be produced rather quickly. Fossilization can take hours, days, weeks, etc., depending on the conditions.

The paleontologist-actor said we were going back “3 million lifetimes”—back to when there was only one continent, “Pangea.” The world, he declared, was ruled by dinosaurs. The kids and parents in the audience were then told that at the time of dinosaurs, the closest relative to humans was something that looked like a “cross between a mongoose and a lizard.” (How flattering to know what one of our “relatives” looked like!) Walking with Dinosaurs certainly indoctrinates people to think we are just animals (so why not act like animals, I would submit?) The narrrator told us: “Animals had come a long way since they crawled out of the oceans.”

As we watched this stage production, we found many ways you could compare what’s taught in this evolution-filled show to what we present in our Creation Museum. Below, we will use WWD for Walking with Dinosaurs and CM for our Creation Museum:

Much evolutionist teaching was given as the host explained how, from fossil footprints, you can interpret whether an animal was a herbivore or carnivore (e.g., by looking at its claws, this supposedly meant the creature was a savage carnivore, said the narrator). By the way, there are animals today with large claws that eat mainly plants (certain bears for instance)! The host then calls such interpretation science. Because when most people hear the word science, they think of observational science that has built our modern-day technology, and they can easily get brainwashed into thinking that when an evolutionist calls something “science” (like interpreting the past when they weren’t there), they have to believe it is fact!

The actor-paleontologist continued to present much more evolutionary indoctrination and made statements like:

The narrator leaves you with the impression that evolution is something that plants and animals do—in fact, he personifies evolution.

At the end of the program, we are told that a comet wiped out 65% of life on earth, including the dinosaurs. But “don’t mourn” the disappearance of the dinosaurs, though, for “when you are in your garden, look up at the birds directly above us,” because the dinosaurs “are still with us” (i.e., they evolved into birds). (For our take, see What Really Happened to the Dinosaurs? or Did Dinosaurs Turn into Birds?)

Should you take your children to Walking with Dinosaurs? While the animatronic dinosaurs are spectacular, there is a deliberate agenda to indoctrinate young people and their moms and dads in evolution and millions of years of earth history.

At the Creation Museum, we admit up front that we are presenting the history in Genesis as true, but we do even more. We also teach people how to think about the issue of origins—not just what to think. The museum lets children and adults actually know what evolution is and help them walk their way through this topic in such a way that they learn the problems concerning trying to interpret the past in relation to the present world.

Lest you think we are overstating the evolutionary content in the show, we wish to point out that even the paleontologist-actor in the program is named “Huxley,” apparently a tribute to Thomas Huxley, the man who popularized Darwin’s evolutionary ideas with great passion in the 1800s (so much so that he was dubbed “Darwin's bulldog”). He was also the evolutionist who engaged creationist Samuel Wilberforce in a famous 1860 creation/evolution debate at Oxford.

The Show vs. the Creation Museum’s Dinosaur Exhibits

Walking with Dinosaurs was first presented on stage in Australia (in 2007) and became an immediate hit. Now, in America, the $20-million program (plus it reportedly costs $1 million a week to operate) has been presented to over 2 million people. We happened to see the show at the brand-new arena on the campus of Northern Kentucky University, located about a 20-minute drive down I-275 from our $27 million (initial construction costs) Creation Museum. (For $7 million more, by the way, we have a permanent facility with several dinosaur-related displays, and we present the true account of dinosaur history.) Our museum also simulates earthquakes (and other things) in our special effects theater, and we also have our own paleontologist-actor who pops up occasionally inside the museum to tell visitors the real history of the world.

Incidentally, the NKU campus has seen many of its science professors openly criticize creationists (and our museum in particular), including through letters to the editor, guest columns in local papers, a professor who leads evolution programs for children at a nearby farm, etc. As AiG and our museum get criticized by some NKU faculty, ministry friends have approached some of the NKU science professors about debating an AiG scientist on campus, but they have come up empty. Apparently it’s safer to be able to take pot-shots from the comfort of an office or classroom than it is to go on stage and defend evolution in public.2 One day we may see one of our PhD scientists debate an NKU science professor in the same arena that staged Walking with Dinosaurs.

You could pay anywhere between $25–65 per ticket for Walking With Dinosaurs. For a family of two adults and two children (and there were lots of children in the show we attended), you could pay as much as $260 for 70 minutes of evolutionary indoctrination and entertainment, only to learn you are just an animal in the survival of the fittest.

For less cost, however, you can obtain a family year-long pass (for an entire household) to the Creation Museum to learn the truth about life and, most of all, to hear the solution to man’s sin dilemma, as the wonderful salvation message is clearly presented. And, yes—you will see some realistic animatronic dinosaurs and take a walk through a center that presents the true history of the world.

We encourage you to save your money and avoid the ardent evolutionary indoctrination in the Walking With Dinosaurs stage production and invest in eternity by taking your children on a walk with dinosaurs at the Creation Museum!