This week, PBS TV in America is airing the Bill Nye: Science Guy movie that, last year, was shown in select theaters around North America. After AiG supporter Joshua Cedar attended one of those screenings, we published his review in September. A few staff members viewed the movie for the first time Wednesday night and had the following thoughts to add to Mr. Cedar’s commentary.

Most readers are probably aware of the fervor that Bill Nye, TV’s famed “The Science Guy,” has in fighting what he deems to be anti-science efforts, especially in two areas: those who deny that humans are primarily responsible for climate change and, of course, those who reject what he believes to be the fundamental idea in biology: evolution. Naturally, Answers in Genesis, in particular its two outreach attractions, the Creation Museum and Ark Encounter, are squarely in his documentary’s crosshairs. More precisely, founder and CEO Ken Ham is front and center, with numerous video clips, screenshots, and a continuation of Nye’s misguided notion of the Creation Museum being “Ken Ham’s anti-evolution establishment” and the Ark being “Ken Ham’s new creationist park.” 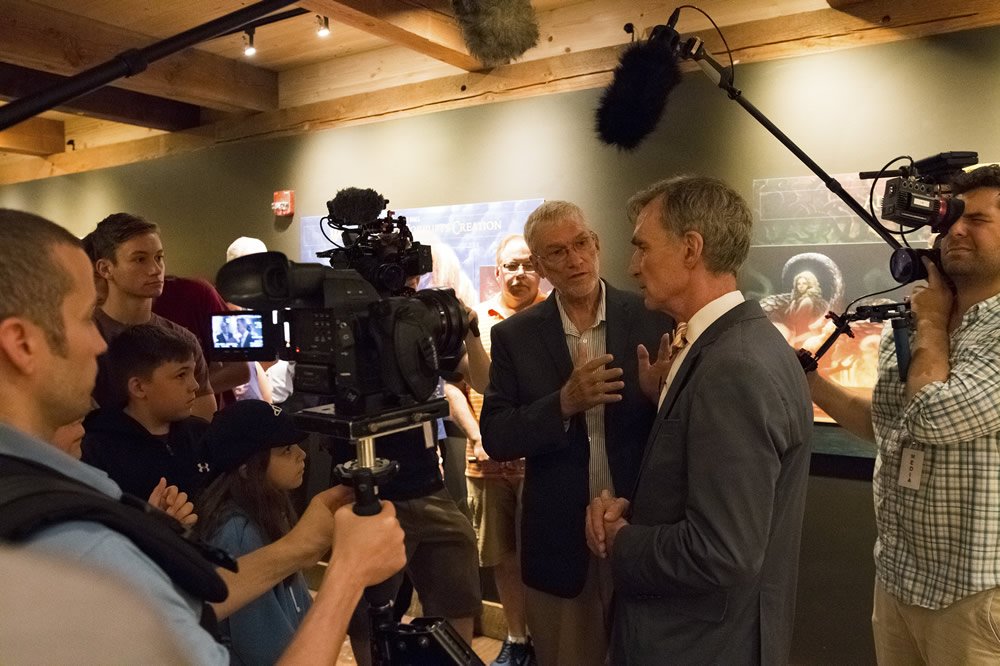 On day two of the Ark Encounter’s opening week, Bill Nye “the Science Guy” accepted Ken Ham’s invitation to take a tour of the Ark with him. But Mr. Nye decided to turn the walk-through into a debate, with his documentary crew in tow.

Those who watched the debate between Ken and Bill in 2014 may recall Nye’s repeated use of terminology such as “Ken Ham’s model” and “Ken Ham’s followers.” We point out yet again that the Creation Museum and Ark Encounter were and are projects supported by thousands of like-minded believers all over the world, and any reference to “Ken Ham’s” teachings are referring to the beliefs of anyone that reads the book of Genesis plainly. Though Nye says he has no problem with religion, he says emphatically, “The earth is not 6,000 years old,” as the Bible’s lineages clearly indicate, and he attacks the biblical accounts of Noah’s Flood and Ark.

Every argument brought up against biblical creation belief in the film has been thoroughly discussed in creation literature. Consider the following sample:

Yet in his debate with Ken in 2014, Bill Nye asked for one evidence that the earth is 6,000 years old and even suggested that rock layers forming quickly would be one. Well, here’s an article for Bill Nye: “Bent Rock Layers”—and actually, here’s ten reasons the earth is young (and there’s more where those came from). Let the rocks cry out (Luke 19:40), and let the heavens declare God’s glory (Psalm19:1), as we often declare at AiG.

The movie showed Bill Nye’s involvement with the design of the Planetary Society’s new space sail, with which he should acknowledge the magnificence of our Creator’s design and handiwork in nature if he would only look. Prof. Stuart Burgess, a creationist engineer who also designs space technology and speaks for AiG, said of his recent patented gearbox used for the ENVISAT satellite solar array that he would be offended if someone suggested he “just evolve it from another kind of gearbox.” As a fellow engineer, Bill Nye surely can acknowledge his and his colleagues’ work on the space sail in the “immense challenges of design” (as Dr. Burgess referred to his efforts in “Why Biblical Creation Is Good Science”), not chance over any length of time. How much more do the complexities and beauty of nature need to show?

Bill opined the supposed irony of the Juno space station orbiting as he distantly viewed the Ark in Williamstown, Kentucky, calling the huge ship a monument to “anti-science.” Again he overlooked the claims of dozens of exhibits inside and even the remarkable design of the Ark itself. One would have thought that, as an engineer, Bill would have at least commented on the craftmanship, size, and quality of the Ark, but Bill remained silent on that, even as he walked through the Ark with Ken for two hours. Shortly before and after the July 2016 opening of the Ark Encounter, several trade magazines marveled at the construction of the Ark Encounter.

The Ark Encounter has been referred to as the 8th wonder of the world and required hundreds of people directly working together towards a common goal—crafting the largest freestanding timber frame structure in the world.1

The ark is a massive structure. The 205,832-square-foot structure is five stories high set on a 15-foot-high raised concrete platform with a ground level gift shop. Levels one through three are dedicated to exhibit space that will focus on a variety of teaching exhibits designed to highlight the biblical flood account.2

The term “of biblical proportions” is rarely meant literally, but a new museum in Williamstown, Ky., may be an exception. Completed in July 2016, the Ark Encounter purports to be a full-scale replica of the titanic wooden vessel built “300 cubits long, 50 cubits wide, and 30 cubits tall” . . . making the ark replica an astounding 510 feet long, 85 feet wide, and 51 feet tall.3

While Nye the engineer appears to be unimpressed by the stunning design and architecture of the Ark, Nye the man is more concerned that his film mock biblical accounts, such as those of Noah’s Ark and Noah’s Flood. He also continually stated that he wants to leave the world a better place for his family, the world, and children most of all. We would agree with that sentiment, of course, but we have a basis to address the issues of the day, the Word of God, and we will answer to our Creator for our stewardship and obedience in that regard.

Although this piece aired on public television, it is by no means an objective documentary.

Although this piece aired on public television, it is by no means an objective documentary. It is a hagiography of Bill Nye, someone who is extolled by several luminaries who were interviewed: famous astrophysicist Neil deGrasse Tyson, human genome researcher Francis Collins (a Christian evolutionist), and science communicator Ann Druyan.

Druyan is the widow of science popularizer and Cosmos TV star Carl Sagan. In the Nye film, she and Tyson declare that the science-education torch once held by Sagan has been ceremoniously passed to his former student, Bill Nye. Nye, they assert, is today’s reliable spokesperson for science issues. Worse in its lack of objectivity, Bill Nye: Science Guy, even with its glimpses into Nye’s humanity, is a self-serving piece of filmmaking: it was produced by Bill Nye Film, Inc., and at the end of the movie, a credit line declares that Nye’s company was solely responsible for the film’s content. It is something of a surprise that such a work passed muster with a network like PBS. 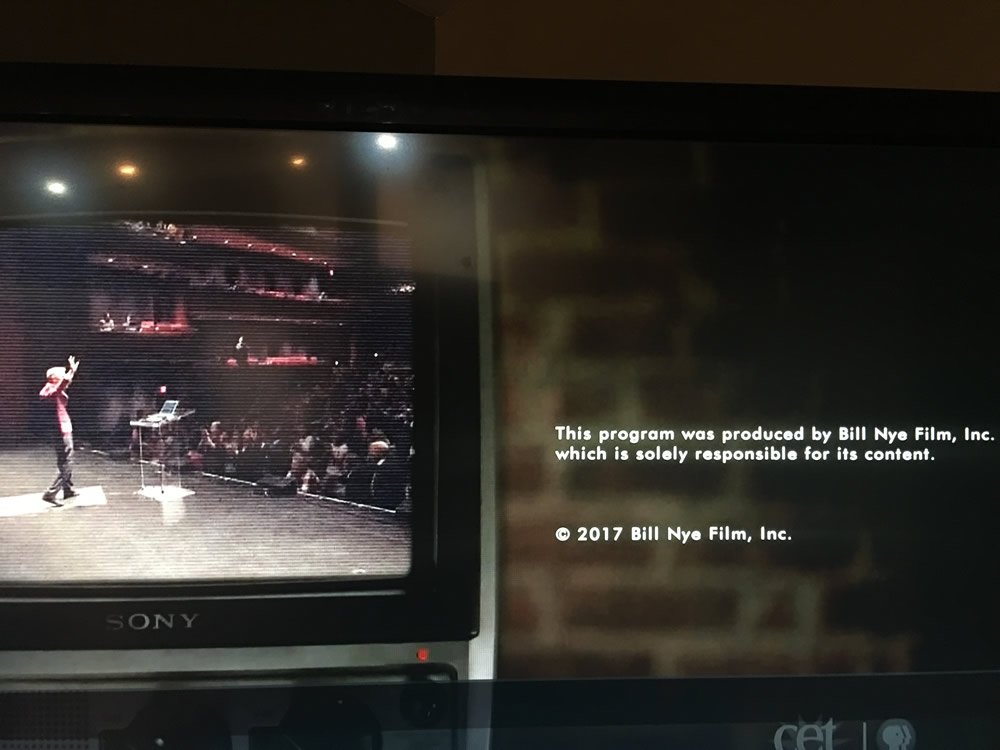 It was touching to watch Nye’s heartfelt and sacrificial love for his sister and brother. It is so sad that he can’t see the sacrificial love that Jesus embodied in his willingness to go to the Cross as our sacrifice for sins. We can continue to pray that Bill will be convicted of his need for a savior, receive Christ, and see the much greater purpose of honoring God with his science efforts and accomplishing great things for eternity.