Holding a Biblical worldview is the first step for generating the logical and rational basis on which to perform good science. Notable scientists include men such as Johannes Kepler and James Maxwell. Kepler discovered the phenomenon of solar wind through observation. Hundreds of years later, Maxwell provided mathematical models explaining its behavior. Today’s engineers rely on the discoveries of these men to accurately plan the trajectories of spacecraft, and have even proposed ways of exploiting the solar wind for their gain. The challenging environment of space is a playground for engineers to test their creative abilities, and the field of space technology has seen astonishing levels of innovation over the last 50 years. But just like the scientists who discovered the foundational principles (that engineers may sometimes unwittingly take for granted), the best approach for solving future engineering challenges requires acknowledging God as Lord and Creator.

Almost 400 years ago, German astronomer Johannes Kepler observed that whenever a comet entered the solar system, as it approached the sun and started to disintegrate, the tail of debris always pointed away from the sun rather than trailing in the comet’s wake. Kepler attributed this phenomenon to “radiation pressure.” Several centuries later, James Maxwell developed mathematical models, known collectively as Maxwell’s Equations, describing the wave-like behavior of electromagnetic radiation. Maxwell’s models today provide a physical explanation for Kepler’s radiation pressure observed several hundred years earlier, confirming that electromagnetic radiation emitted by the sun possesses momentum and, therefore, is capable of exerting a force when colliding with an object. We now know that this effect is sometimes so significant that it can change the attitude and alter the trajectory of spacecraft (especially on long interplanetary missions), so its effect must be accounted for during the mission-planning process.

A novel satellite exploiting this effect is scheduled for launch in the spring of 2018, to investigate the feasibility of using solar wind as a source of propulsion for spacecraft and satellites by using solar sails. The system, referred to as Lightsail 2, operates and behaves much like a conventional sail, harnessing the momentum of electromagnetic radiation released by the sun into space. For spacecraft and the payloads they carry, mass and volume are precious commodities. The sail is, therefore, made from a lightweight, reflective material such as Mylar, which is folded carefully to fit inside an enclosure roughly the size of a toaster prior to launch. A mechanism for unfolding is used to unpack the sail covering approximately 340 ft2 when fully deployed.

If successful, solar sails may eventually prove suitable for propelling long, unmanned space exploration and possibly manned, interplanetary operations. The sails are theoretically capable of attaining very high velocities without having to carry fuel—exploiting the potentially unlimited supply of propulsive power radiating from the sun. Conventional spacecraft currently rely on a combination of cryogenic propellants (i.e., liquid gases), rocket motors, and planetary slingshots to achieve the required velocities. A slingshot often requires executing a maneuver within the vicinity of Jupiter (the largest and most massive planet in our solar system) to exploit the gravitational field and orbital velocity of the planet in order to accelerate the spacecraft. A spacecraft fitted with a solar sail would not require a detour to Jupiter or need to carry an expendable fuel payload and could accelerate gradually to the required velocity for as long as the sun shines. Furthermore, a manned spacecraft using a solar sail trying to reach a nearby planet such as Mars would be able to carry more essential life support equipment for the crew in the place of fuel that would otherwise be needed for propulsion. More mundane but nonetheless important operations include using solar sails to safely decommission ever-increasing amounts of space junk and old satellites by slowing their orbital velocities and destroying them in earth’s atmosphere on re-entry. 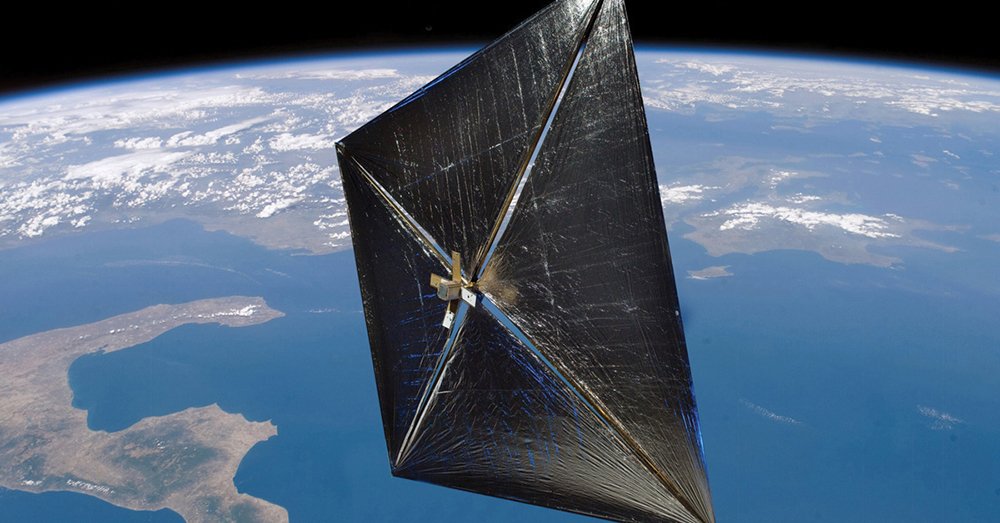 Solar radiation may be an unlimited source of free propulsion for long-term missions, but future manned missions will still require sources of electrical power as well as consumables such as food, water, and most importantly, oxygen. One of the most sustainable ways identified to cater to these needs is to replicate the natural cycles of water, nitrogen, and carbon present here on earth. Solar power is commonly used to provide electrical power for near-earth missions, but as the distance from the sun increases, the amount of solar energy that can be captured with practically sized solar arrays decreases, requiring alternative power sources. Historically, long missions have addressed this by using nuclear power (e.g., the Voyager 1 and 2 spacecraft and Curiosity Mars rover), where the heat of radioactive decay is used to produce electricity using a thermocouple. However, the life spans of these devices are limited, and new materials (known as skutterudites) are currently being developed to increase the operational life and power-to-weight ratio of radioisotope thermoelectric generators (RTGs).

Many missions still require the use of liquid or solid cryogens (produced and stored in devices known as cryostats). Cryogens are excellent sources of very low-temperature refrigeration and are needed to run certain scientific instruments and to power thrusters. Although the vacuum of space itself is cold, the temperatures experienced at the surface of a spacecraft rapidly vary between hot and cold extremes, depending on its orientation relative to the sun. The contents of a cryostat, however, will boil and evaporate if heat is allowed to leak into the contents. The mechanical structure of a cryostat must also maintain the correct pressure in the vacuum of space. When cryogens vaporize, they typically expand up to 700 times. The generated vapor cannot be contained indefinitely by the cryostat, and gas must be vented to space to relieve pressure. The venting of vapor is wasteful and can be avoided by cooling and removing heat from the cryostat using a very low-temperature refrigeration device known as a cryocooler. These cryocoolers (a type of heat engine) operate on gas power cycles, such as a reverse Stirling cycle or Brayton cycle,1 can be driven using an electrical power source, and represent the state-of-the-art in reliable, low-temperature refrigeration.

The God-Given Genius of Modern Man

Achieving the high reliability of components in the remote environment of space while also surviving the vibration and stresses of launch remains paramount. The space exploration missions of Voyagers 1 and 2 have achieved breathtaking discoveries in operational science, sending back images of the outermost planets in our solar system including Jupiter, Saturn, Uranus, and Neptune. For nearly 40 years, they have reliably sent back data and are now approaching the bleak environment of interstellar space. Even systems dormant for 37 years have faithfully responded to telecommands, adjusting the attitude of the spacecraft to maintain communication when needed. Designing mechanical components such as cryocoolers and thrusters for such longevity, repeatability, and minimal wear requires considerable engineering effort.

Engineering electronic components for reliability presents a unique set of challenges. Modern electrical and software systems use increasingly complex components that must operate outside the protective shield of earth’s magnetic field. Engineers must, therefore, account for the ionizing effects of solar radiation on semiconductor devices (generating what are known as single event upsets) and mitigate against any errors they may cause in software.

Thinking God’s Thoughts After Him

This article has only touched lightly on the technicalities. The reality is that the challenges for engineers abound. How might an engineer find solutions to some of these problems? Psalm 111:10 gives us a clue:

The fear of the Lord is the beginning of wisdom; all those who practice it have a good understanding. His praise endures forever.

A budding engineer requires wisdom in order to solve problems, and the Bible tells us that the first step in this process is to fear the Lord. This reverence for a holy God is evident in the work of many scientists and engineers. Kepler’s fundamental laws of planetary motion, for example, were the result of his Christian thinking and his acknowledgment of the creator God:

Great is God our Lord, great is His power and there is no end to His wisdom.

Maxwell also acknowledged God in his work while collaborating with many other like-minded giants in the fields of physics and thermodynamics, such as James Joule and Lord Kelvin. The operational science performed by these men was fundamental to explaining the way nature behaves. Their work was observable, testable, repeatable, and falsifiable by experimentation. Similarly, today engineers should acknowledge God as the source of inspiration for their creativity. One particular example is the development of a novel arm and mechanism used on a satellite launched in 1998 by the European Space Agency. The system featured a double-axis worm gear used to deploy a triple-articulated hinged joint attached to a solar array. The worm gear is permitted to rotate and also move longitudinally against a spring, depending on the load torque. This double action reduces the transmission of shock loads using an elegant, simple solution that does not require active torque control. The inventors of the mechanism also identify the triple articulated arm configuration as “optimum” in terms of meeting the design requirements and boldly justify:

God has designed the human arm as a triple articulated structure.

God’s handiwork is clearly evident. Finding sources of inspiration in nature for solving engineering problems becomes far easier and is more rewarding than starting with the premise that the natural world is only the consequence of poorly orchestrated, haphazard processes. Acknowledging God’s authorship is the first step in solving the seemingly impossible.

To God be the glory.

Previous Article Evidence for Hamitic Migration into Egypt? Correlating Results from Recent DNA Testing of Egyptian Mummies and Genesis 10:6 Next Article Battle of the Sexes or Designed Lizard Niches?